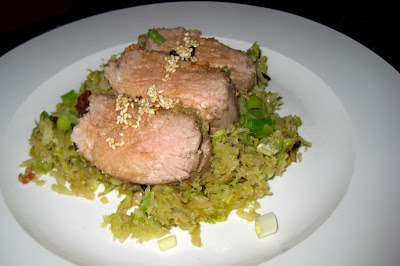 In the same week I spotted this recipe for brussels sprout hash at Serious Eats, we purchased a tree-trunk-sized branch o' brussels sprouts at the supermarket. There are a lot of sprouts on one of those branches, and while I really didn't want to be eating them every night for a week, it was a much better deal than purchasing one of those little cups of sprouts or buying them loose (6x as many sprouts for $2 more).

Since I had decided that hash was a fine idea, I pushed the whole lot of them through the shredding blade on the food processor. Half of them were put into a freezer bag and tucked away for another time, and the rest went into a large saute pan with a mess of onions and some olive oil. I thought that bacon would be a great addition to the hash, but as we didn't have any, I had to find an alternative.

Meanwhile, I popped a couple of pork tenderloins in the SousVide Supreme. Mr Minx had suggested that I use Asian flavors on the pork. I knew there would be leftovers, so to keep the meat somewhat neutrally-flavored, I seasoned them fairly simply with tons of garlic, a good tablespoon or so of freshly grated ginger, and an equal amount of gochugaru (Korean pepper flakes). That way, we could eat the leftovers as tacos or in a pasta sauce as well as fried rice or a stir fry. I also made a simple dipping sauce for the meat with soy sauce, sesame oil, and sesame seeds.

Because I was now leaning in a vaguely-Asian direction, I chopped up some Chinese sausage and fried it until crispy. When the hash was cooked, I stirred in the sausage.

Eventually, all of the elements came together. After five hours of cooking at 135F, the pork was lightly pink inside and extremely juicy and tender. The garlic and ginger flavor had permeated the meat, and even the flavor of the gochugaru (although not the heat - it's a fairly mild pepper) was obvious. The hash was delicious - it reminded me a bit of sauerkraut in texture, although of course it was not sour - and would make a really nice accompaniment to a holiday turkey dinner. We rounded out the meal with some mashed potatoes, and a simple salad of julienned apple seasoned with several tablespoons of lemon juice.

There were leftover sprouts, which we ate the next morning topped with fried eggs, in a variation of the Serious Eats recipe.

In a large saute pan set over medium heat, cook onion in a tablespoon of olive oil and a pinch of salt until soft and starting to brown. Remove onions from pan and add sausage. Turn up heat and cook sausage, stirring regularly, until sizzling and brown. Remove sausage from pan and set aside.

Return onions to pan. Add brussels sprouts and an additional tablespoon of olive oil. Stir well, then cover pan and turn heat down to medium. Cook until sprouts have wilted and softened, stirring occasionally. Taste for seasoning and add salt and pepper.