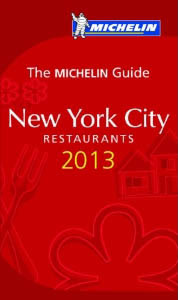 Michelin (yes, the tire company) has been putting out their famous Red Guide, the oldest and best-known European hotel and restaurant guide, since the turn of the last century. In 2005, Michelin came to the US with the publication of their first New York Guide, and later added San Francisco and Chicago to their repertoire.

The books are fantastic, but people on the go might appreciate the new phone apps. While they're not available for Android users just yet, Apple users can check out the new Michelin Guides 2013 for San Francisco, New York, and Chicago on their iPhones, iPod Touches, and iPads by downloading the new Michelin apps from the iTunes store.

Once you've downloaded your apps, make sure to like the Michelin Guides on Facebook to participate in a Virtual App Tour this Friday, December 7th at 12pm EST. The tour will focus on each city's app and how it functions. There will also be a daily Instagram contest, starting today, with 10 free apps given away each day.

Speaking of Michelin Stars, congrats to one-time Next Iron Chef contestant Dominique Crenn for the two-star rating of her San Francisco restaurant, Atelier Crenn. This makes her the first female chef in the US to earn two Stars - quite the honor.