Oy. I am not in the mood to recap. I just got back from a whirlwind trip to New York and I'm mentally and physically exhausted. But as they say - the show must go on!

This week's show opens in last week's stew room. John is once again proving why he's the Most Hated Chef in Dallas (and by the time the show is over, possibly the Most Hated Chef on TV, except maybe Gordon Ramsay) by insulting all and sundry in the room. He even goes so far as to call Mr Mustache a "blogger." Honestly, I think he should be proud to be called that - we bloggers are more influential than chefs these days. Heh heh. Stefan above it all, saying it's too much like the Real Housewives of Seattle. Andy Cohen, make sure you give Stefan credit when you put that show on your network.

I'm back. Just in time to put up the Christmas tree. Yeah, that's why this post is so late. Man. My back is killing me. And I could use a drink....

Back to blogging. And back at the Top Chefpartment the next morning, there's more bellyaching, but Stefan decides his time is better used by giving pretty Kristin a foot rub. Despite the fact that she's not a lesbian. With any luck, he'll turn her into one.

Finally, we're in the Healthy Choice kitchen with Padma - who is wearing Seinfeld's puffy shirt - and Portland-area chef Naomi Pomeroy, who Padma calls "Nye-omi." You might remember Nye-omi as the bossy finalist who yelled at her dad during a Quickfire in Top Chef Masters season 3. In case you don't remember, Bravo airs a little clip of that very moment. 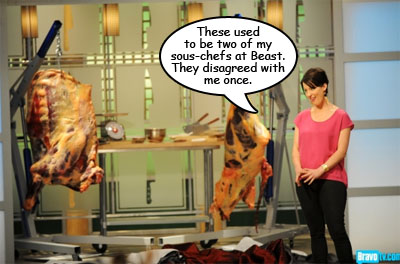 On to the Quickfire. Padma dramatically removes a curtain set up behind to to reveal two primal cuts of beef. Essentially dead cows are hooked up on a rack behind her, and the chefs have to take them down and butcher them for the cuts they want to use in a dish. The guys get one primal down easily, but three of the female chefs wrestle with the other one for several minutes before managing to get it off the rack and onto a butcher block. A mere hour later, the cheftestants present their beefy dishes for judging. CJ feels confident because his tartare is fantastic, and Mr Mustache's meatball is quite tasty, but Pads and Nye-omi give the win (and immunity) to the biggest ego in the room, TMHCiD (aka, John Tesar).

For the Elimination Challenge this week, the chefs are celebrating the beloved Seattle institution, Canlis, which has been around for 62 years. They must recreate the original 1950 menu for a special dinner. The winner of the challenge will get a cool $10,000 from their corporate sponsor, Healthy But Not Tasty Choice, AND there will be two chefs eliminated. Yay! Hopefully that will shave a week off the competition.

The chefs get some time to peruse the 1950 menu and divvy up who makes what. Stefan decides to delegate tasks and gives a squab dish to Carla. Now why did he give her that particular dish? Because she doesn't make thquab regularly? Because she snapped at him last week? Dum dum DUM! 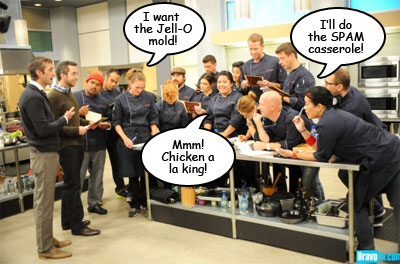 TMHCiD decides since he's got immunity, he'll expedite. Also, because he's superior to the other chefs in the competition. And expediting takes someone who knows what he's doing. You know, like TMHCiD.

Commercial break and Bravo's "text in your answer..."question of the night:

Is John the chef to beat?
A: Yes. With a baseball bat.
B. No. But smack him with a bat anyway.

The next day, the cheftestants get three hours in the Canlis kitchen to prepare their dishes..It's difficult for a cook to prepare a dish he or she has never eaten before, especially when he or she doesn't have the recipe. Carla is having trouble butchering her squab; she doesn't know if she should remove the rib cage, or what. Chrissy doesn't seem to be having much luck with the Canlis special salad. Kristin, meanwhile, has a big chore ahead of her: cooking onion rings and mushrooms. How will she handle the pressure? And poor Tyler, who's terrified that he's on the bottom again, worries and makes terrible faces over his crab cocktail.

The guests arrive and the first set of tickets come in. TMHCiD does a terrible job of expediting right off the bat, asking The Mustache for two onion soups, then calls for a "second soup." Mustache clarifies that there are only 2 soups "all day," so why did TMHCiD ask for three? Because he's not as superior as he thinks he is. And, according to the text poll results, Bravo viewers don't think he's all that tough to beat.

The judges this week, besides Tom and Padma, are Hugh Acheson, Emeril, Nye-omi, and the third generation of Canlis owners, brothers Brian and Michael. 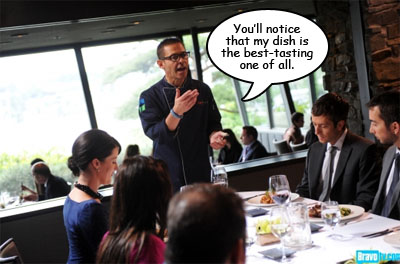 John and the Apps come out first, to mixed reviews. They love Tyler's crab cocktail (which surprisingly doesn't taste of flop sweat and tears), but aren't so fond of The Mustache's cold French onion soup with hard croutons and a lack of cheese. Chrissy's Canlis special salad is overdressed and her croutons are soggy. Maybe they should switch croutons?

Meanwhile, in the kitchen, Carla has to face order after order of squab being sent back because it's nearly raw. So for the judges' order, she overcooks the beast a bit. 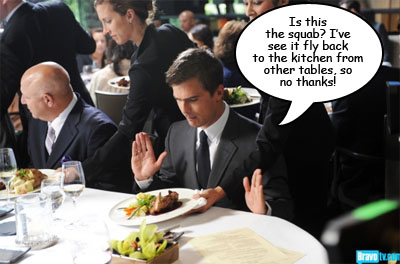 The sauce is actually pretty tasty, but the presence of the ribcage makes the judges unhappy. Micah's vegetable side dish is both over- and under-cooked. Something for everyone...to complain about. Stefan's liver is very good, but CJ's lamb kabobs are mealy and underseasoned, not to mention cooked with the very un-50s technique of sous vide. Kristin's mushrooms and onions are a big hit. 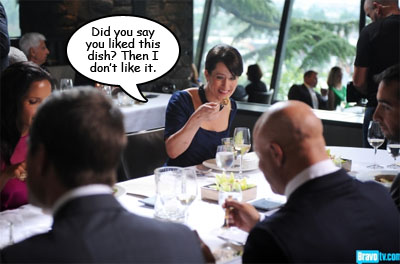 Anyone else notice that Nye-omi tended to disagree with everyone else's opinion? There's a reason her name is Nay-omi.

The chef go to stew elsewhere in the restaurant until Padma calls out Tyler, Stefan, and Kristin. They are pleased to learn they are on top, and Stefan pretends to be delighted that Kristin wins for her lovely mushrooms. 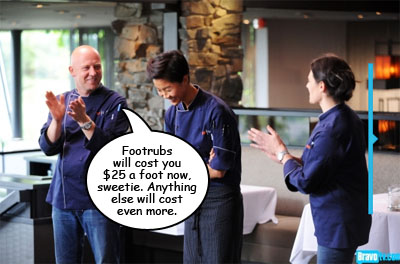 On the bottom are Carla, Chrissy, CJ, and The Mustache. The judges complain that Mustache's soup was cold, and he seems surprised. They then ask how John was as an expeditor, and Mustache truthfully tells them he was "a monkey" at the job. Which I'm assuming is not good. When asked about the temperature of her squab, Carla admits only trying the first and last ones and not testing each (which is why most of them were sent back to the kitchen). CJ gets hell for using a modern technique to cook his lamb, and Chrissy is bashed over her soggy salad. Chrissy, surprisingly, is eliminated, but then so is Carla, who won last week. So far, that's a pattern - Kuniko wins week 2 and is eliminated week 3. Carla wins week 3 and is eliminated week 4. Guess that means Kristin is out next week?

Speaking of next week, the cheftestants seem to be paired up, and at one point one of the judges declares that the "whole team" is going home. Does that signify another double elimination? Let's hope!