It's that time again - time for another season of Top Chef.

Pardon me if I don't seem particularly excited this time around. Seems like Top Chef Texas just ended, doesn't it? Maybe because, between the new "post-audition audition" format, and the ridiculous, gondola-filled, multi-part finale at a ski resort, it took forever to slog through. Honestly, by the time it was over, I was done with Top Chef. Obviously I got over that feeling, and I watched Top Chef Masters in the meantime.

I enjoyed Top Chef Masters - mainly because it was only ten episodes long. Unlike Masters, Top Chef Seattle looks to be much longer. I'm not sure I can make it through this entire season.

There are twenty-one chefs competing this time, but thankfully six are sent home before the crew even makes it to Seattle. Yes, this season's first episode is like last season's first two episodes - a bunch of cooks who won't even end up on the show make an appearance, embarrass themselves in front of prominent chefs, and go home. But at least they had the common sense to hold this nonsense to one episode - presumably the show will actually start next week.

So these twenty-one pre-cheftestants show up in groups of five and six at the restaurants of this season's permanent judges - Tom, Emeril, Hughnibrow, and Wolfgang Puck. There they are given a challenge to complete; if the judge is satisfied by a cook's performance, he or she is awarded one of the coveted Top Chefcoats and a bus ticket to Seattle.

First we see five somewhat nauseated chefs enter Tom Colicchio's LA outpost of Craft. One of them is John Tesar, a buddy of Tony Bourdain from back in his drug-addled Supper Club days and currently the "Most Hated Chef in Dallas." Apparently he's the designated asshole of season 10 and will be striving to achieve the same level of success currently enjoyed by his former co-worker.

Colicchio is a hard-ass, as we all know, and he shows them who's boss by throwing his five chefs directly into the fire during service. They get tasks like breaking down chickens and filleting fish, which they accomplish with various degrees of success and fuck-up-ery. Then they have to prepare dishes for the restaurant. Tesar kisses the ass of pleases King Tom and is awarded a chef's coat right away. He goes to wait on the bus while the others toil away.

We're left hanging as to the fates of the other four chefs in Tom's kitchen while we meander over to Emeril's Table 10 in Las Vegas. His five charges are assigned a far easier task than working the line - make soup. How hard can that be, right? They all can just open up a box of Emeril's stock, season it up with some Essence, thicken it with some of Emeril's panko breadcrumbs, add some of his pasta sauce for color, and serve it up with a cup of Emeril's coffee. Mm mm good!

Emeril would love it. 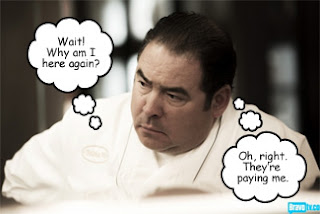 Emeril calls time, tastes soups, and gives three of his five a pass to Seattle. One of them is half-Chinese/half-European mutt Jeffrey Jew, whose Bravo bio makes him seem a little dickish. I dunno, maybe because he's a personal chef in DC. I'm kinda hoping he's a Stone, Tyler Stone type, but he actually seems like an ok guy. The other guy who makes it is Joshua Valentine, who has the kind of mustache that villains twist before tying innocent damsels to railroad tracks. He also sometimes wears a hat, a la Spike, but I think the stache is plenty.

You know, this season could have been great. It could have been the season of the Mustache. Sure, only two of the competitors have mustaches, but both are impressive. The other dude not only had the lip toupee, but he was also named Jorel. Yeah, like Superman's dad. Only skinny and pale and not played by Marlon Brando. I could have had fun spelling his name differently every week, as I did with fellow Kryptonian Ty-Lor last season. I might have even called Jorel "Ty-Lor" just to see if you were paying attention.

I also could have done fun polls, like this one: 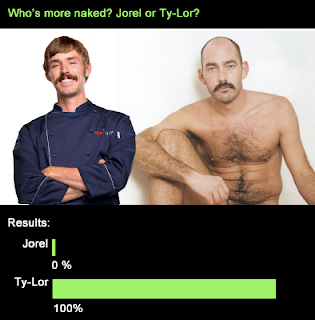 Alas, Jorel was instead sent to the Island of Misfit Chefs, rather than to cloudy Seattle. But I am getting ahead of myself here.

Another six of the hopeful chefs meet Wolfgang Puck in Beverly Hills. Wolfgang is one tough cookie. Remember when he grabbed one of Laurine Wickett's donut holes and threw it across the room back in season 6? (No? Here's a refresher.) He didn't resort to throwing things around this time, but I have a feeling he would have if he weren't in his own tidy kitchen. I participated in a conference call with him a couple of weeks ago, and the man is obsessed with omelettes. He believes that most young chefs can follow a recipe, but sorely lack in technique. Back in his day, when chefs apprenticed, they had to learn the basics. One of the most basic things a chef can do is to make an omelette. So he had his six charges make an omelette for him. And not just a plain rolled omelette, but one with fillings and toppings and whatnot. 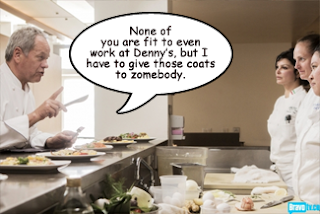 Most of the omelettes were unappetizingly brown on top, so, personally, I would have rejected the lot. However, Wolfie only sent home the guy whose eggs seemed to be perspiring bacon grease. Everyone else was given a chef's coat and a private lesson in omelette-ery. 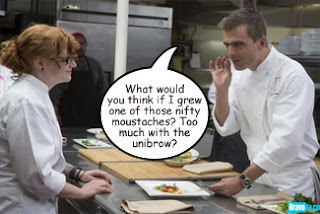 Next up, we see judge Hugh Acheson in the kitchen of one of his Atlanta restaurants. He has the final five pre-cheftestants, and he asks them to make a salad. Something beautiful and tasty. Kale gets fried, a chef named Danyele sets a pile of tomatoes on fire, and a tall Belgian chef with a resemblance to a young John Larroquette makes lobster. There's only one reject in this pile; the rest will go on to Seattle.

Finally, we end up back at Craft, to see if any other of Tom's cooks have passed muster. The mustachioed Jorel has fucked up both chicken butchery and a beurre fondue, so he's shown the door. Only two more from the original batch of five are allowed to cook on. Don't ask me their names. I'll work on that next week.

So after all that, fifteen of the original twenty-one are still standing and will travel on to Seattle to meet Padma, Gail's boobies, and the rest of the cast.