Happy day after Thanksgiving! Has everyone emerged from their tryptophan comas yet? Ready for another recap? How about one I write without consulting my notes? Good! Because I am too! 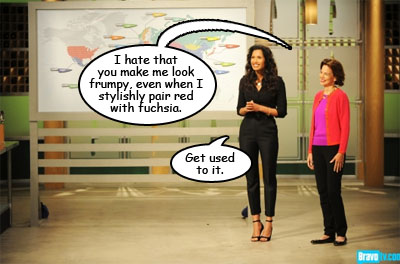 The cheftestants file into the Healthy Choice Top Chef Kitchen and find Padma showing off her skinny legs alongside Food & Wine's Dana Cowin. Dana's a big fan of dumplings, apparently, so the cheftestants are going to cook them for her - wrappers, fillings, sauces and all. Next to Padma is a map with little knives stuck into it, each representing a particular dumpling from a particular nation. She invites the 'testants to charge the board like a hoard of shoppers at the WalMart on Black Friday, grab a knife, and get to work making a dish as authentic as possible. For those folks unfamiliar with the dumpling her or she got stuck with picked, Amazon kindly furnished a big pile of Kindle Fires for them to use to find pertinent information on teh Innernets. If they can do so in five minutes.

Meanwhile, if you remember back to last week's show, Carla cut her hand while reaching into her knife bag. (They called it her knife bag, but someone may well have switched it for a bag of cobras. Yes, Carla is that likable.) With her hand bandaged like the Mummy's, she couldn't work the tablet properly, thus couldn't find the proper recipe to use for her fufu. Sounds like a plausible excuse. Maybe. Odd that "fufu" was considered a dumpling; I think of the African staple more like mashed potatoes. But then Stefan was able to snag the German "dumpling" klopse from the board. They're meatballs, and I'm pretty sure he made the same dish in season 5. In any case, after an hour of work, Dana and Padma do their tasting thang. Carla ends up on the bottom with her non-fufu, along with Brooke who couldn't find flour to make a wrapper for her dumplings, or Kuniko, who didn't even get her octopus balls on the plate. (How is it that Japanese Kuniko lucks out with Japanese takoyaki, yet can't finish the dish?) Stefan's meatballs were on top with Micah's and Josie's dumplings, and amazingly, Josie wins the challenge. Did she ever win anything in season 2? I hope she enjoys it, because this might be the last challege - and last immunity - she wins this season. 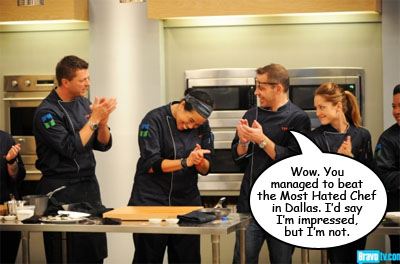 Padma tells the gang that suddenly, despite it being the middle of summer, it's Thanksgiving. The chefs nod like they accept the charade completely. Fools. Padma divides the group into two, calling one batch of chefs the Gray Team (how festive) and the other team the Red Team (how inventive). I'm going to call them the Turkeys and the ToFurkys. No I'm not. That would be too confusing. So Gray and Red it is. Padma then announces that for the first time EVARrr, in Top Chef history, two of the judges will be leading up the teams. She calls out Emeril and Tom, who strut into the room like they're important or something. Or like turkeys. Emeril takes the reins of the Gray Team and tells them they will be doing it Oppa Gungam New Orleans style, with Cajun/Creole influences, but no Turducken. 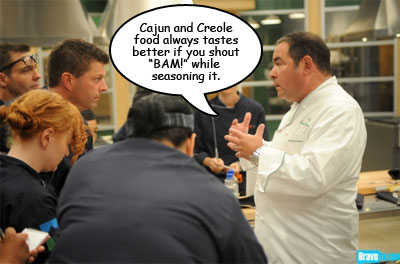 Tom's Red Team is doing an Italian-influenced meal, but no lasagna. Is lasagna on Thanksgiving a thing, btw? When we went grocery shopping on Tuesday, the Shop Rite was having a special on quarts of ricotta cheese. There were huge bins of the stuff in the dairy aisle, and I was tempted to buy some because I like eating it straight out of the container with a big spoon, but our refrigerator was going to be packed with enough food as it was. Mmm, lasagna. I would certainly prefer that to turkey. But I digress....

The Big Shots hang around for day one, then the cheftestants will have to finish the food on their own on day two.

That next day, they head off to a place called Fare Start, which offers culinary training to struggling and homeless persons. The whole "teach a man to fish" thing, I guess. Once the two teams are in the kitchen, Stefan immediately starts bitching that the Gray Team is taking up too much space and shoos them away from a piece of prime real estate that he wants. Then he and John Tesar get into a dick-measuring contest. "You're a kindergartener!" shouts Stefan. "No! You're the kindergartener!" shouts Tesar.

We know the show has a medic around, but how about someone who changes diapers? 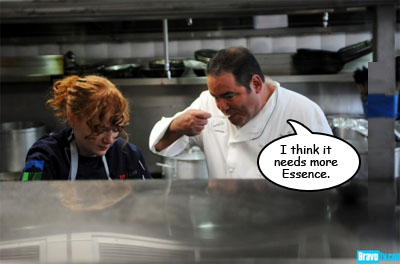 After Stefan and John are done bellyaching, Stefan gets into it with Carla. She's making soup, and Stefan and CJ go in for a taste. She goes ballistic, saying it's not yet seasoned and she knows what she's doing. Stefan makes the mistake of calling her sweetheart, in that endearing misogynistic way of his, and she goes off again. Apparently, while she wants to be a James Beard with a nice ass, she doesn't want to be called "baby," "sweetheart," or "honey." Not that it will stop Stefan. She needs to thank her lucky stars that she's not a lesbian, otherwise he'd be cooing sweet nothings into her ears for the foreseeable future.

Time to eat, and Emeril's team serves first. Among the judges this week are Dana Cowin, Fare Start's Megan Karch, and local chef by way of France, the chef with the hat, Thierry Rautureau.

Josie's turkey is grossly undercooked, practically bloody at the bone, but she's got immunity so lucks out. Tyler's gumbo is underseasoned and lacks depth (which is pretty much the way I feel about any gumbo that hasn't come from Cajun Kate's). Kuniko's potato pave is almost completely raw. It's beginning to look like Emeril's team will be the loser this week.

That's even more obvious when there's pretty much only praise for Tom's team. CJ's turkey is perfection, Lizzie's mashed potatoes are simple perfection, and Carla's carrot soup with meatballs is even more perfect than the other perfect dishes, even if Tom was expecting cabbage soup. Cabbage, carrots - both sound the same when spoken by Carla.

After dinner, the judges get to business. Emeril and Tom take themselves out of the voting and the remaining judges unanimously choose the Red Team as the winner. They then start nominating losers on the Gray Team. Dana thinks Tyler should be gone for his lackluster gumbo, Emeril nominates both Sheldon's greens and Kuniko's potatoes. Tom hates Josie's turkey and despite having immunity, he wants her to stand with the other nominees.

Later, Padma comes into the green room to proclaim the Red Team the winner, pulling aside CJ, Carla, and Lizzie to face the jury. While they loved all three dishes, Carla's soup gets the nod from the panel. Wonder if she'll be more obnoxious with a win under her belt?

From the Gray Team, we see Tyler, Kuniko, Sheldon, and Josie face the judges. Tom tells Josie that he wants her gone for her turkey fiasco, but he can't kick her off this week. She thought perhaps her turkey was maybe slightly medium, rather than well done...she understands why she's there. Sheldon's infraction is pretty minor - his greens aren't cooked long enough - so he's safe. It's Kuniko's raw potatoes that get her the boot. The others tell the judges that she was busy helping everyone else, but since she alone was responsible for her dish, and she couldn't get it completed in five hours, she has to take the fall. Fair enough, but disappointing considering she won last week's Elimination Challenge.

Back in the green room, Tesar is trying to make himself into the Most Hated Chef on Top Chef by maligning Kuniko's skills, suggesting that any moron can make potatoes. Douche.

Next week - the recap will be late again. Hopefully Friday. There will be a double elimination! Yay! And...the return of Last Chance Kitchen is impending.