After stumbling upon news of a fledgling Hunan restaurant in Catonsville, I rounded up the clan on the ruse of a birthday celebration and we hit the road. Catonsville is so much closer to us than Odenton, and it would be nice to find a restaurant serving authentic Chinese food in Baltimore County.

Hunan Taste is certainly a prettier restaurant than Grace Garden, and seeing that most of the patrons were Asian was a good sign. 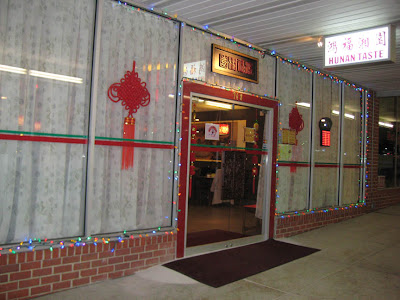 And having to wait for a table at 6:20 on a Saturday night also seemed like a good sign. Gave us a few moments to peruse the hundred-plus-item menu as well. That's the authentic Chinese menu, which was hard backed and spanned many pages. These expensive-looking tomes were obviously straight from the printer because some of the pages on mine were still glued together at the edges.

Dad was along for the trip and busied himself with the American-style Chinese selections on a much smaller menu. From it we chose appetizers. 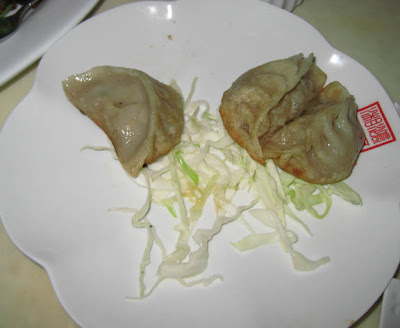 This had been a plate full of pan-fried dumplings. Hey - we were hungry and attacked before I remembered the camera. They were good - generous filling, wrapper wasn't doughy, and the bottoms had been browned nicely. But the wee container of dipping sauce was a tad too small for the huge dumplings and much of the sauce was displaced onto the table top. And there's one of my main complaints - too many bowls, cups, plates and not enough table top. The tables are just big enough for eating, say, a sandwich and some fries, but try to eat family style and there's just not enough room for serving dishes and everything else. It is good that the individual dishes from which to eat are small and dim-sum sized, and not full-sized dinner plates. I also liked that diners were automatically provided with chopsticks and had to request forks, not the other way around. 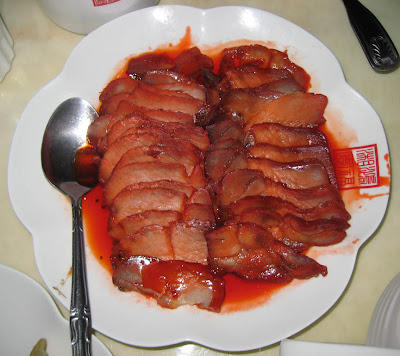 Dad wanted to try the barbecue pork appetizer. It was a bit like a horror movie on a plate. When I was a kid, we got roast pork quite a lot, in fact, for a while there, it was the only thing my once-picky brother would eat in a Chinese restaurant. I remember it as usually being quite succulent, cut in thicker slices, and having maybe a bit of juice but no real sauce. This version was a little tough, and other than the sweet sauce, it didn't taste like much. 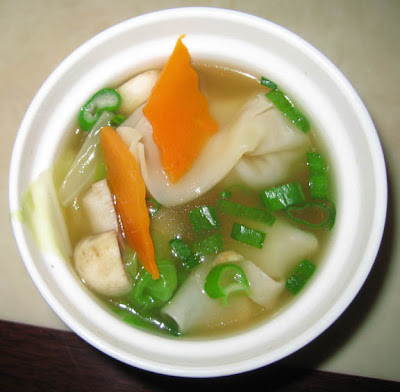 The four of us each ordered won ton soup. It was bland. And thus concludes the American-Chinese portion of the meal. 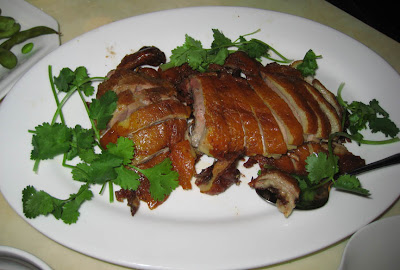 Duck-crazy people that we are, we had to order the roast duck. It was much like Peking duck, on the bone with rendered fat and crisp skin, served with a bowl of hoisin for dipping. It was good, but not stellar. Nothing has yet to beat the Peking duck from the late, lamented, Jesse Wong's Hong Kong. 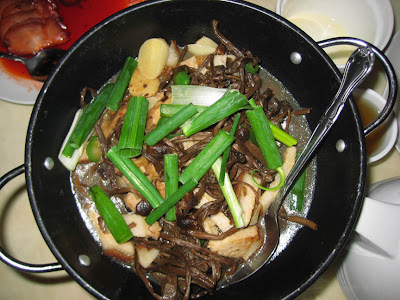 I had to order the tea tree mushroom and pork casserole, simply for the fact that a Chowhound user called it a "mega-mushroom orgasmatron." According to a woman who I am assuming is one of the owners, the tea tree mushroom is not available in any other restaurant in our area and that Hunan Taste imports them from China, along with a container-full of other special ingredients. From what I could tell, tea tree mushrooms have long thin stems and small heads. The flavor is delicate and the texture is crunchy/snappy, much like jellyfish or to those who haven't eaten such exotica, the skin on a natural-casing hot dog (imagine a hot dog about half the thickness of a pencil). There were bits of pork belly (mostly fat) in the dish and a mild broth. I would say this dish is more about texture than about flavor - no mouthgasms for me. That's not to say it wasn't good - it was. 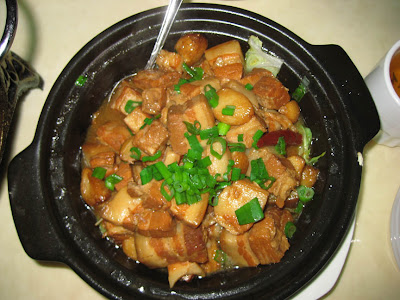 Because we were in a Hunan restaurant, we had to order Hunan-native Chairman Mao's favorite dish of red-braised pork belly. The large squares of pork were succulent and did not seem overly unctuous, despite all the fat. It was seasoned with many whole garlic cloves that had softened during cooking and a bit of star anise. The flavorings were very subtle which made this dish quite enjoyable. 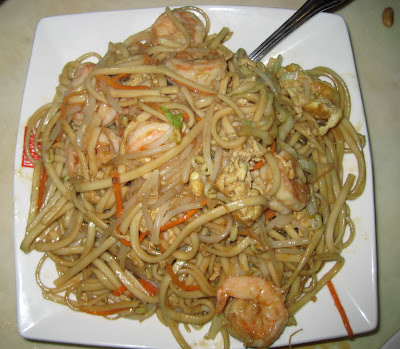 Finally, after we had finished just about everything else, we received the shrimp fried noodles we had ordered at the start of the meal. The food comes out as it's ready - they had originally brought out something the server called "beef chow mein" but when I said we had ordered shrimp (really, who orders beef chow mein, except maybe werewolves?) she took the dish back and started a new one. And this brings up a service issue. From the start, I thought it odd that our waiter, who was clearly American-born, wasn't familiar with the menu...and it seems despite my having to point things out to him, he managed to write things down incorrectly. (We had ordered four won ton soup and received two. I reminded the server we had asked for two additional portions. Those bowls took a good 15 minutes to arrive.) I'm going to chalk up the uneven service to the fact the restaurant is still brand new (it opened in late October) and that it was pretty busy in there. The owner lady was fairly attentive though, asking if she could answer questions and steering us away from the "bullwhack" saying that it was a "beef part" and that we didn't want to order that. I'm guessing it's penis....

Anyway, back to the noodles. They were much like a simplified version of lo mein, but pleasantly non-greasy. The shrimp were plump and plentiful. Overall, a good basic dish that's worth ordering.

So while the food was good, there was nothing mind-blowing or earth-shattering about it, unlike dishes we tried on our first trip to Grace Garden (fish noodles, tea smoked duck, pork belly with mui choy). But then we didn't try anything funky, like the "soft shell turtle in brown sauce," or "stir-fried pig blood and meatballs" (which I have to admit is intriguing), nor anything with Hunan-style heat. But we'll see if we can't correct that on the next visit....