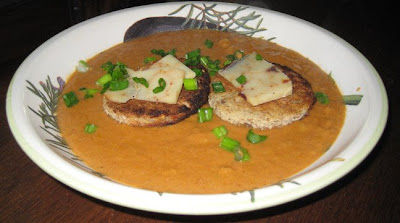 When I was a kid, my dad would make soup with peanut butter. Jif, to be exact. Sautéed onions and chicken stock were about the only other ingredients in his concoction, maybe some cream. It was delicious - rich, savory, rib-sticking.

I had no clue what to make for supper on Saturday, but I remembered there were at least four jars of various peanut butters in the fridge (chocolate, spicy Thai, and peanut/almond butters from Peanut Better (now Sunland, Inc.), and a jar of salted but unsweetened natural pb from Trader Joe's. PLUS a jar of almond butter. (I won't mention the humongous jar of Jif in the cupboard. Oh, I guess I just did.) I thought I should make some peanut soup to get rid of at least one jar. I found this recipe for West African Peanut soup with bell peppers and tomatoes and thought that was interesting enough for a main meal.
I halved the recipe, substituting jarred roasted red peppers for the raw bell pepper, and before adding the rice and peanut butter, I whirred it to a smooth consistency with a stick blender.   Because I used the unsweetened natural pb, I needed to add a bit of honey to the soup to help bring out the flavor and to temper the tartness of the tomatoes.
Then I cut some rounds from the plethora of wheat bread we had on hand and toasted them to make croutons, topping each piece with a sliver of some interesting cranberry chipotle cheddar I picked out at Wegman's a couple of weeks ago.  A touch of scallion for color, et voila - delicious peanut soup!
It was almost as good as Dad's....
Posted by theminx