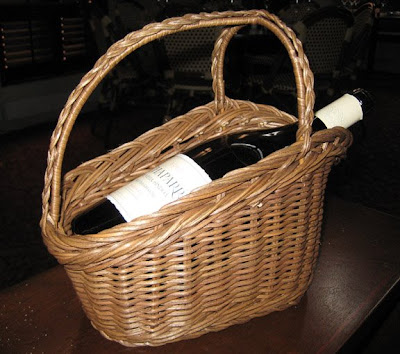 Mr Minx and I took Minx Brother to Pazo for a belated birthday dinner last Thursday. We were happy to see that their menu seems to have gone back to their original tapas concept, with dozens of selections arranged under category headings like "bread" and "cheese" and "seafood" and only a handful of full-sized (and priced) entrées. I happen to like tapas very much. With Pazo's return to its strong suit, and the recently opened Tapabar in Little Italy, it's good to see that Sun critic Elizabeth Large's frequent proclamations that the tapas "fad" has gone out of fashion is not correct.

The food was as good as ever at Pazo, but there was one new element to the presentation: the weird little wine basket pictured above. What an awkward and unnecessary piece of tablewear! It takes up the space of three bottles, so it had to be placed on a separate little table that was brought up to abut ours. And it takes two hands to pour - one to hold the basket handle, and one to hold the neck of the bottle so it doesn't roll out of the basket. Because it was so awkward, we did not dare pour our own wine, which forces the servers to be extra attentive. Luckily, as they are pretty much constantly bringing new plates to the table, they can be. But would this work in a different sort of restaurant?

The only purpose I can see for having a wine basket is to keep the wine on its side and sediment at the bottom of the bottle, but really, how much sediment forms in bottles of recent vintage? And who cares about sediment in an $18 bottle of wine?
Posted by theminx

Weird!! I would be tempted just to yoink that bottle right out of its cozy little basket when it was time to pour. And an extra "side table"? That's just extra strange.