With this episode, Top Chef Seattle is now no longer Top Chef Seattle- it's Top Chef Celebrity Cruise Endorsement! Woo hoo! The five remaining cheftestants - Brooke, Lizzie, Stefan, Sheldon, and Mustache - pack their bags, find some coats, and clamber aboard a ginormous ship that will presumably take them to Alaska. That is, if they don't have to walk the plank first.

Brooke doesn't like boats. She doesn't explain exactly why. She says she has to get over it though because she fears passing her phobia on to her kid. But isn't that what parents are for? To make their kids neurotic? She indulges in a series of umbrella drinks with her compadres and keeps a box of Dramamine handy, just in case drinking on a boat is a bad idea. Ahem.

Padma shows up to spoil the fun and she's brought Top Chef Masters' host Curtis Stone with her. He's got a really terrible hair cut, which at least distracts me from his scary face. Speaking of hair, Padma's looks pretty shitty, too. 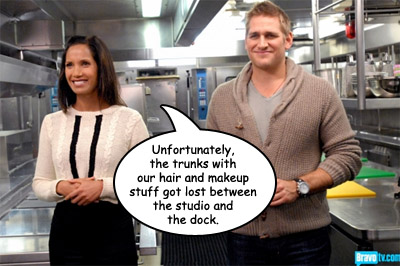 They tell the chefs to stop drinking, because they're going to be heading to the kitchen to prepare food for the ship's "Welcome Aboard" party. Each of them has to make one bite of food for two hundred people, and that one bite has to feature the scrumptuosity of ...iceberg lettuce.

Cute. Cruise ship. Iceberg lettuce. Don't make me explain it to you. Just imagine Celine Dion singing "My Heart Will Go On." Hey, it can't get any worse than it already is, right?

Actually, yes it can. This is a "super-sized" episode. "Stupor-sized," is more like it. Just for that, I'm going to make this recap as short as possible.

The cheftestants suit up and head to the ship's kitchen, which is huge and all-electric. A Padma voice-over tells the chefs not to fear - all of their Anolon cookware has been removed from the Top Chef Landlubber Kitchen and dumped onto the boat for them. Can't let a sponsor get unmentioned!

Rather than Padma and Curtis going around from chef to chef to taste their Quickfire dishes, the chefs have to bring their dishes to the judges. Stefan quips that the kitchen is twelve minutes away, so I hope nobody was expecting warm food.

Curtis seemed to love every bite, from from Mustache's elevated wedge salad (with bacon) to Sheldon's lettuce wrap with pickled lettuce core. Sheldon's was most interesting, had the best texture, and he gets the win.

Padma then tells the cheftestants to go play and explore the boat. Immediately Sheldon and Lizzie go for manicures while Brooke, Stefan, and Mustache go drinking. This interlude with the manicure is such a damn time waster. Lizzie meets someone else from South Africa, they gab, it has nothing to do with the show. Mustache tells us that it's his baby's due date, but he knows nothing. And Stefan says he lost his virginity on a cruise ship. I thought the story was that he lost his virginity to a babysitter when he was a pre-teen? Is anything he says true?

The whole segment is a huge waste of my time, and it cements my decision to stop watching Top Chef after this season.

More time wasting: the five eat dinner at Qsine, one of the ship's restaurants. They eat food served bizarrely in a dresser drawer, which seems too twee and gimmicky. And twee and gimmicky turns out to be the Elimination Challenge. Padma and her new sidekick Curtis show up and give the cheftestants indigestion by informing them they'll be cooking dinner at Qsine, doing something clever and cutesy with the old standard, surf and turf, and using some of Qsine's cutesy serving vessels.

Because Sheldon won the Quickfire, he gets the advantage of choosing his proteins from the ship's store first, and the other chefs cannot use either of them. After running around in the walk-in, he takes filet and lobster, the two most obvious and boring choices. Brooke takes frog's legs and mussels. Stefan pork belly and eel. Mustache bacon and scallops. And Lizzie grabs the suckling pig and still more scallops. 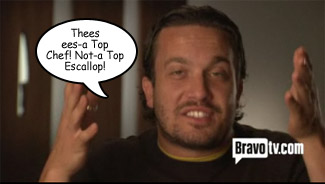 At this point, I've ceased paying attention to the show. All I gather is that Mustache wants to make pasta with his scallops by mixing them with gelatin and egg white, but he's obviously never watched Iron Chef. He spreads his scallop goo onto a sheet pan and puts it in the fridge, thinking it will set up. What he needed to do was put the goo in a pastry bag and pipe it into boiling water. Predictably, his method doesn't work, so he decides to "scramble" the scallop as if it were all egg, because he's running out of time and is desperate.

Brooke is the first to serve her dish to the panel: Curtis; Hugh Acheson; three Celebrity employees including Julie, Your Cruise Director, the chef, and a suit; Padma; and Tom. They find her combination of frog's legs and mussels to be innovative and delicious, but her pappadum accompaniment is greasy. 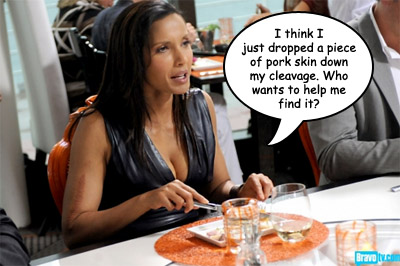 Mustache's scallop scramble is surprisingly tasty, especially when topped with his non-crunchy pork belly and bacon. The flavors are punchy and innovative.

Sheldon, who has the two most boring ingredients, makes the most boring dish. His Korean bbq beef with kimchi is tasty, but his tempura lobster is as soggy as his tempura custard in the roller derby challenge and Lizzie's tempura lobster from the sushi Quickfire. Tempura anything just isn't a good idea on Top Chef, so let's put it on the list with risotto, shall we? 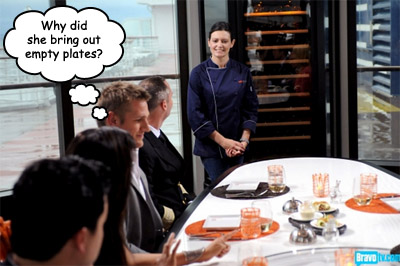 Finally, Lizzie presents a cabbage roll that didn't get enough time in the steamer. The undercooked cabbage popped open when cut, and the delicate scallops inside were overpowered by the pork. But Curtis was impressed that she made a whole suckling pig, even though we know she just lopped off a leg and used that.

And blah blah more time wasting with the judges talking around the table about what dishes they liked and who should win even though we just heard them talk about it. And then they bring out the cheftestants and do the same thing in front of them. It's obvious that Brooke gets the win on originality alone, despite her greasy crackers, and she does. She also wins a 7 night Caribbean cruise, which you know she's going to give to someone else. Lizzie and Mustache are safe, so it comes down to Sheldon's soggy tempura and Stefan's crunchy skin. Personally, I think the tempura was a bigger sin, but Tom didn't like Stefan's dish so Stefan goes home. Well, he doesn't go home - they're on a boat. I guess he gets locked in the hoosegow for the remainder of the trip. 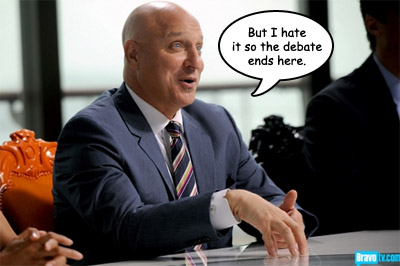 Meanwhile, while this is all going on, the Save a Chef voting has been raging between CJ and Josie and the results are very close - 94% for CJ, 6% for Josie.