This week's episode was much less drama-filled than last week's, which is a good thing, because I'm barely hanging in with watching this show anymore.

The six remaining cheftestants are in their condo, eating and smoking and whatnot. Stefan is already referring to Kristen as the "ex-wife," (wonder who is on his radar now?) and he predicts she'll be back after Last Chance Kitchen. Josie tries to get some sympathy out of Lizzie by crying over what she realizes was an unfair elimination the day before. Boo hoo. Lizzie just leaves the room as quickly as possible.

They head to the Product Placement Kitchen and find Padma standing there with a little Japanese dude. Stefan tells us that's Katsuya Uechi, a sushi master so famous, Stef's wetting his pants just thinking about it. Padma tells the cheftestants that they will have to make sushi for the master, and now all of them are wetting their pants and Stefan is pooping. Why is he freaking out so much? Did he screw Katsuya's wife or something?

So the chefs get to slicing and dicing. Katsuya basically tells them to "keep it simple, stupid," but in Japanese, and most of the competitors completely ignore him. Mustache says there's not much sushi in Oklahoma, and I suppose we could believe him, but there's TONS of sushi in Baltimore - not exactly a hotbed of Japanese immigrants - so I think he's making an excuse. He makes an omelette with bacon and puts it on rice and calls it sushi. Katsuya calls it "greasy." Lizzie decides to get away from making a sushi dish at all and puts raw fish in a hot broth with tempura on the side. The broth and fish thing is a no-no and the tempura is soggy. Bwomp bwomp. Brooke, however, says she has sushi for lunch about three times a week, which means she's probably suffering from mercury poisoning at this point. She makes a simple octopus sushi that Katsuya calls "crean." And finally, freaking-out Stefan manages to "pull something out of his butt," (mm - appetizing!) and wows the sushi master with his yellowtail and shiitake combo. 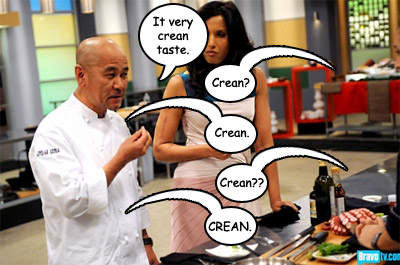 There's no more immunity in the competition, so Stefan has to make do with $5,000.

Padma shoos Katsuya out and brings in another Asian chef - profane semi-genius David Chang, of the Momofuku restaurant empire in New York and now Toronto. With him is Tom Colicchio, who brags to the cheftestants that he rented a really swell house in Seattle and has invited all sorts of cool and hip celebrity chefs to hang with him in his off time. He name drops Emeril, and Wolfgang Puck, and Michele Bernstein and we're not so impressed. And then he mentions Jon Shook and Vinny Dotolo, and we're still not so impressed, as we recently watched them lose an Iron Chef America battle (rerun). Has Seattle has lost its magic already? None of these chefs represent the Seattle area, but are from LA, NY, and Miami.

Anyhoo, Tom wants to hire the cheftestants as caterers for a little shindig he's throwing that evening. And he wants fried chicken, dammit.

So the chefs make fried chicken. Sort of. Lizzie says while growing up in South Africa, she wanted her mom to buy one of those big buckets of fried chicken, but she never would. Instead, she made her kids eat boneless skinless chicken breasts. Honestly, that's torture. Stefan is somewhat excited about the prospect of playing with breasts and thighs, but rather than doing fried chicken, he makes chicken cordon bleu, which is fried, but is not fried chicken. Josie, on the other hand, is completely convinced she's got this battle in the bag because she's making real southern fried chicken with a buttermilk marinade full of genuine southern ingredients like Sriracha.

After a period of prep, the cheftestants head to Tom's house using the wonder of the GPS provided by whatever Toyota product they're riding in this week. Once there, they have one hour to cook their chix and get them served.

There's not a lot of kitchen space, but the producers have thoughtfully set up fryolaters in the back yard. Josie is having issues with one of them, so begs to borrow Lizzie's when she's done. Lizzie is a nice gal and says yes. I guess she hasn't had any personal issues with Josie yet in the competition; I'm sure Mustache wouldn't have been as accommodating.

The cheffy guests arrive and sit themselves at a long table in the back yard. Padma is already stoned out of her gourd. She calls Tom, "Tommy," and suggests that Emeril and Wolfie are a "power couple," just because one of them pulled the chair out for the other. The wine is flowing pretty freely through the whole dinner, as this is the Terlato wine challenge. The lucky winner of the fried chicken battle gets a year's worth of Terlato wines. That's 365 bottles, according to Padma. Maybe she can drink that much wine in a month year, but 12 bottles would probably be sufficient for me.

The cheftestants present their dishes three at a time. First we see Josie, Sheldon, and Lizzie. Lizzie's non fried-chicken fried chicken is moist and crispy, and they all swoon over the salad she serves on the side. And they drink some wine. And then comes Josie's chicken, which is oily and has "flobby" skin, according to Wolfgang. And they have some more wine before finally tasting Sheldon's, which he's made two ways. He lost a few pieces to overly hot oil, so not everyone gets to taste his Momofuku-style wings, but that doesn't matter because Tom has commandeered the plate and has eaten all of them. And they drink some wine. Because, of course, wine is a natural accompaniment to fried chicken. 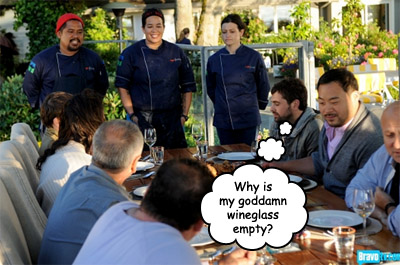 Wolfgang is so potted, at one point he holds up a naked chicken leg bone and exhorts everyone to "look at his bone." Padma giggles and looks. They drink.

The next round of chicken comes from Brooke, Mustache, and Stefan. Dotolo and Shook ask Brooke if she recognizes them. She doesn't, and they tell her they both applied to be line cooks in one of her restaurants but she turned them down. Probably because she felt that two grown men who do everything together - including apply for jobs - is weird. Now she wishes she had hired them in case that gives her an edge. She needed an edge, because her boneless skinless breasts were overcooked and unpleasant. Wolfgang said she shouldn't be on Top Chef. She should barely be on The Apprentice. Burn! And they drink!

Mustache smoked his chicken before frying and topping it with traditional-ish Buffalo-style accouterments. The judges loved it, and then they drank more wine. Finally, the mocked Stefan for making such an old fashioned dish as cordon bleu. And it wasn't even good cordon bleu. But it went really well with the wine.

The judges are so drunk, they can't possibly do any judging that night, so they send the cheftestants home while they sleep it off. The next day, we see Stefan calling his mom, who has Parkinson's disease. He gets a little weepy, but we know by now that calling one's loved ones is no longer a clue that the chef is being sent home. We know he's safe.

Later, in the stew, Padma comes in with an icebag on her head and blearily calls for Mustache, Lizzie, and Sheldon. They've made the best chicken. While they adore Lizzie's and Sheldon's, Mustache's is the best of the bunch and they give him a lifetime supply of mediocre wine. 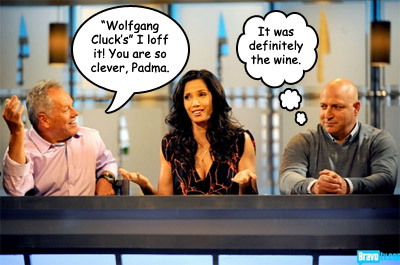 Stefan, Josie, and Brooke then come out for their scolding. They once again mock Stefan for his cordon bleu, and he says they don't eat fried chicken in Germany. Wolfgang then insists that one of the most famous dishes of his hometown in Austria is fried chicken. I guess KFC is not only in South Africa, huh?  Brooke really seems to be on the chopping block because they can't find anything nice to say about her dish. But it's Josie who's done the worst and finally, FINALLY gets sent home.

And the angels sing and Mustache rejoices that Josie and her laugh are out of the picture.

Next week: the final five board a cruise ship to Alaska.