I'm not sure how much longer I can do this. I went to bed angry after watching this week's Top Chef. The producer manipulation of the Restaurant Wars scenario was so blatant, as was keeping Josie in the competition for yet another week. The winner of "Last Chance Kitchen" is pretty obvious, because Kristen will win this competition (or come very close). And why the fuck was the episode fifteen minutes longer than usual? Supersized eps are BORING, not dramatic. I don't need to lose even more precious sleep time because the network wants to milk more advertising money out of Healthy Choice, Toyota, and Canada Dry. grrrr

The cheftestants plan their menus and head to the venue, the Georgetown Ballroom, which just happens to be a kitchen-less establishment. Instead, there's a large patio space and an area that can be used as the two separate restaurants. So not only do the cheftestants have to buy groceries and decor, but also kitchen equipment. How wise is it to put a kitchen outdoors in a city that has rain for much of the year? Guess that just means more drama! or not, since it seemed to be a nice day.

As we learned last week, Sheldon's restaurant is called Urbano, and it will be serving modern Filipino food. Because of his charm and wit, Stefan is in charge of the front of the house. Actually, it's because he has not only restaurant experience, but also Restaurant Wars experience. That seems like a mistake to me, but since the food is Sheldon's, he can't be taken out of the kitchen, and Mustache is a bit hot-headed for the job. Not saying that Stefan isn't hot-headed....

Kristen's restaurant is called Atelier Kwan, and her team is going to serve classic French cuisine made modern. It's an ambitious project, especially with Josie on her team. You can smell the clusterfuck brewing like a cheap cup of acrid coffee from the opening minutes of the episode.

And the minutes in the middle too. And the end.

After shopping and whatnot and the restaurants are set up, Josie tells Kristen she's going to get started on the stock for her bouillabaisse. A bit later, Kristen asks how the stock is going and Josie says she hasn't started yet. Still later, we find that Josie is going to finish other prep work and leave the stock for the next day. Kristen starts a slow boil of her own.

Over on Sheldon's side of the world, everything seems to be running smoothly. It would have been interesting to see the dynamic if Micah were still around. Would he have been helpful, or would his ego have gotten in the way? Would it have caused him to float up into the sky like a hot air balloon?

The next day, Josie is taking her sweet time with her stock. Kristen's inner control freak is really freaking out, and she's having a hard time letting Josie deal with her own dish. 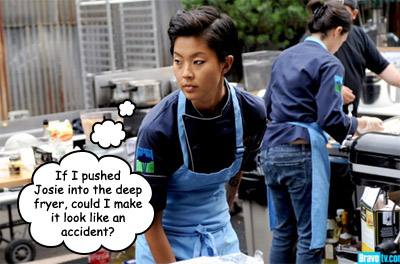 Brooke (who is also working front of the house) and Lizzie are getting their dishes done without any drama. And Sheldon's team is still drama-free, despite Stefan up front.

And then the guests start arriving. The judges - including Danny Meyer, Emeril, and Gail - hit Atelier Kwan right away. Kristen has decided that the kitchen will plate everything a la minute, which makes things slow right off the bat. It doesn't help when the waitstaff mixes up orders and dishes need to be refired.

Lizzie's take on charcuterie comes out first, and it's a big hit. She's used rabbit, but instead of making rillettes or paté, she's made a soup, adding pickled turnips and beets for a nice acid bite. Josie's bouillabaisse comes next. Originally, the plan had been to thicken the stock with leaf gelatin, but since she was taking so fucking long, Kristen told her to thicken the stock with cream, instead. And even though it was Josie's dish, Kristen insisted it should be plated in a particular way. The judges found the various seafood items to be either over- or under-cooked, and the sauce practically non-existent. The third course was Kristen's boeuf bourguignon. Guess the girl didn't watch past seasons of Top Chef, otherwise she'd have known that if she calls a dish boeuf bourguignon, it had better be boeuf bourguignon. Tom especially hates things that are not named properly. Where was the wine in the dish? Otherwise, it was well cooked and tasty, but the judges have to hate. The next course is a cheese course from Brooke that mostly works. And finally, a dessert from Kristen, which she calls a macaron, when it's clearly cake. Indignation and bile rise again in the throats of the judges who hastily retreat to the other restaurant. How. Dare. She!

Meanwhile, at Urbano, Stefan is having a hard time getting rid of lingering customers. There's a gaggle of people at the door, and he's long given up plying them with alcohol. And you just know this is a producer set-up. All of the guests have been invited by either Bravo or Magical Elves, and there's no reason on God's green earth why they wouldn't get up and leave after eating unless the producers told them to linger. And lingering makes Stefan look bad, because the man has no patience. Eventually he gets a table freed for the judges, but Tom, et. al., notice the line of potential patrons not being liquored-up and become disgruntled.

Thankfully the food at Urbano is good. Really good. From Stefan's initial raw fish dish to Sheldon's adobo to Mustache's take on halo halo, the judges can't find fault. Except with Stefan and his service, which was so bad, he didn't even bother to come to the table and explain the third dish. This makes Padma make sour faces and roll her eyes, and Tom look even more cranky and constipated than usual. 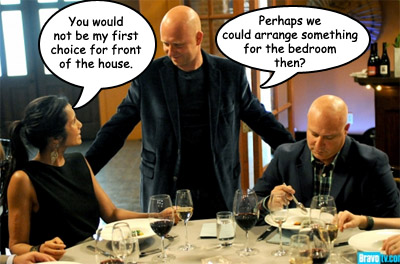 After dinner, Padma wants to send Stefan to jail without passing go or collecting $100, but the judges also hated Josie's dish. They adjourn to Judges' Table to deliberate. Everyone stands judgment and after some whining and bitching from the judges, Sheldon's restaurant is declared the winner, and Sheldon gets a new Toyota with a trunk full of melted Healthy Choice entrees and warm Canada Dry ginger ale. 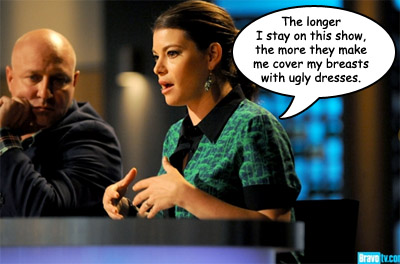 Sheldon's team goes back to stew, and Kristen and Josie are read the riot act over the bouillabaisse. Rather than throwing Josie under the bus for her slow-poke sauce-making, Kristen falls on her sword. It's her fault that someone else's dish tasted like shit, and also that she called two dishes something they weren't. TWO DISHES. That's practically grounds for beheading in Top Chefland. And rather than kicking off someone who has barely been hanging on for the run of the show, the judges send Kristen home. Stefan is verklempt, and he tells her he loves her.

But Kristen wins "Last Chance Kitchen," so she'll likely be back in a couple of weeks, along with whomever wins the "Save a Chef" thing.

Honestly, this show is such bullshit. And I am so sick and tired of those stupid Healthy Choice commercials. If the judges want something to complain about, they should try eating that flavorless garbage.

Next week: I have no idea. I was too blinded by rage to watch the preview.