I've got to say - this week's challenge on Rachael vs. Guy is possibly my biggest nightmare: cooking for a child's party. I couldn't deal with all of those high-pitched voices, whining about whether the chicken fingers are "awesome" enough or if there was enough glitter on the cupcakes. Gah!

But Dean - Dean loves it. He's trying to market himself as the "Gourmet Dad," and thinks throwing a party for beings who are content with eating crushed chicken bones and Dimethylpolysiloxane as long as it's formed into a McNugget is a "real culinary situation." His teammate, Johnny, on the other hand, is terrified. He's pretty sure that kids don't like him, and I'll bet you anything that his effeminate manner got him seriously bullied as a child.

So. There are two kids, a girl named after Will Smith's son, Jaden, and a boy, whose name I didn't write down, so I'm going to call him, "Boy." They are pretending to have birthdays so the celebritynoncheftestants can defrost stuff "cook" for them. Since Team Rachael won last week, they get the "advantage" of choosing whether they'd rather work with Jaden or Boy, and Kathy and Carnie choose Jaden. Hiney Warts basically doesn't get a vote because the women on his team know he just wants to throw the football around with the male child and that ain't happening on their watch.

In addition to the usual menu-planning session, the celebs get 10 minutes with their kid. Jaden seems to like everything the celebs suggest, including hummus, which makes Kathy happy. The boy is a bit more picky and basically only likes chicken fingers and pizza. 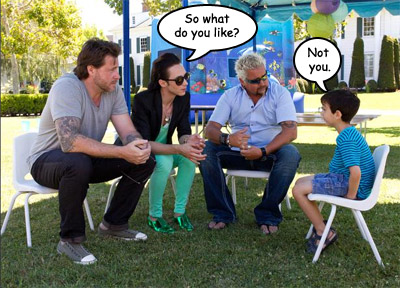 The kids get shooed away like the whiny annoyances that they are and the teams commence to cooking. On Team Rachael's side of the world, Carnie is doing Sloppy Joes, which she's renamed "Sloppy Jadens." (Cute! No...not really. More like...Unimaginative!) Kathy is doing hummus, guacamole, and salsa with dippers, and Hiney is once again doing something extremely simple - quesadillas. 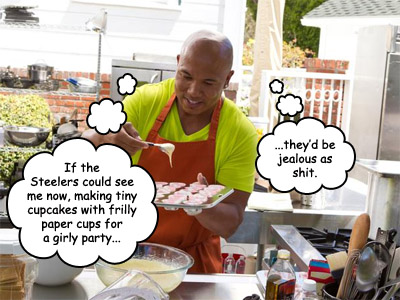 He's also making cupcakes, the idea of which thrills him to deaf! Kathy is making s'mores rice krispy treats, and despite knowing that Jaden looooves cheesecake, Carnie is making raspberry bars, mostly because she's got the recipe memorized. 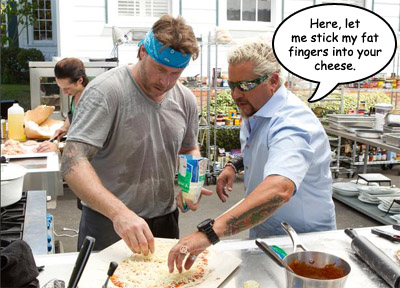 Over on Team Guy, Dean is making cheese pizzas from scratch onto which the kids will add the toppings of their choice. Johnny is making chicken fingers, because he's only allowed to cook poultry on this show. Come on - make him make a damn pork chop! It won't kill him. Or maybe it will. He's also making cupcakes, which he's never done before. Dean is pulling out the stops and making rice krispy treats. Not just your ordinary treats, mind you - he's freezing them with liquid nitrogen so when the kids eat them, steam will come billowing out of their mouths. Also maybe they will freeze shut, which might afford the adults a few moments of silence.

Johnny is having issues with his dish, since he never ever ever EVER fries anything because any fat in his diet would ruin his girlish figure. Oh boo, hoo. Bet famed East German gold medal skater Katarina Witt never said such a thing. Johnny's also never made cake frosting (because it's full of FAT!), so Dean comes to his rescue and makes it for him. Dean is a bit resentful that he has to carry his team, even though he is the "Gourmet Dad," and reminds us of that fact repeatedly.

So the kids arrive and I turn down the volume. Johnny's wearing two dunce-cap birthday hats and one lovely child tells him he looks like the devil. Which is true, if the devil has one pink horn and one yellow horn and wears lipstick and sequins. Hiney is a bit intimidated that he's the only boy on his side of the park and, to fit in, allows the little girls to paint his fingernails. He and Johnny should have switched teams before this challenge. 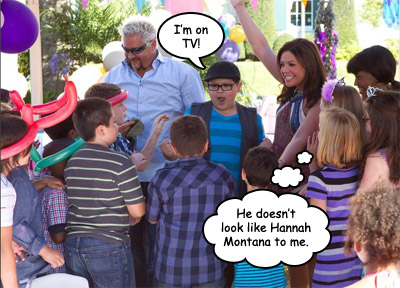 Rachael and Guy arrive and bring with them a pint-sized celebrity guest - Rico Rodriguez from "Modern Family." The kids all pretend to know who he is.

We see Rachael's team serve their food first, and Jaden seems mostly happy with everything. The consensus is that the Sloppy Jadens are nothing special, Kathy's hummus is "mouthwatering," and Hiney's quesadilla is OMGood. Kathy's s'mores are, predictably, "awesome," as are Hiney's cupcakes. Carnie's "rad-berry" bars, however, are not kid friendly enough.

Switch to Boy's party, where Dean's pizza is super awesome, but Johnny's chicken fingers are unevenly cooked and decidedly un-awesome. One smart-ass kid even claims that after eating the chicken he wants to throw up.  I hope his mother is really proud of him. The kids don't much like Johnny's cupcakes, either, but Dean's "dragon's breath" krispy treats steal the show. He makes a big production out of plunging the treats into liquid nitrogen, but I notice that nobody warns the kids not to touch the super-cold stuff. No "don't stick your tongue on the outside of the canister," warnings. Hmm.

After the kids are picked up by their parents, the celebrities face judgement. The kids all filled out comment cards and were predictably cruel. Everyone loved Dean's treats and Hiney's quesadilla, but hated Johnny's Chicken and Carnie's raspberry bars, saying that "boogers taste better." The teams end up tied this week, so Johnny can face Carnie in the Blind Tasting. They have to make something with hot dogs in ten minutes.

Johnny doesn't eat hot dogs, of course, but he tells us he's got plenty of experience with sausage. Of course. He makes a sausage sandwich with fried onions. Carnie is a hot dog gal from way back and makes one with bacon and cheese, a ketchup and onion sauce to go with, and some homemade potato chips. 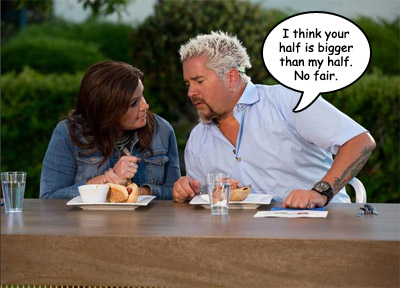 Rachael wisely cuts the sandwiches in half because after sharing straws with Guy last week and finding a stray pubic hair, she wisely doesn't want to put anything he's had in his mouth in her mouth. They are torn between the sausage sandwich and the hot dog, but ultimately choose the hot dog because, well, it was a hot dog challenge.

Johnny goes home, and Team Guy is down to one man. Yes, yes, we know, Dean the fucking Gourmet Dad!

Next week: The celebs get their own food trucks! LDP makes an appearance!