As this week's episode begins, we find that Mustache is not at all sorry that TMHCiD was booted off the island last week. And neither are we. But Stefan, on the other hand, misses the guy, probably because now, without him around, he's the oldest person in the cast. Just keep globbing on that moisturizer, Stefan, and you'll be fine.

The chefs file into the Top Chef Healthy Choice Amazon Toyota kitchen to find that it has become the Top Chef Healthy Choice Amazon Canada Dry kitchen for a day. Wolfgang Puck is on hand to judge the Quickfire Challenge, which is to use fresh ginger in a tasty dish. With only fifteen short minutes to cook, the chefs scramble, some actually using the ginger ale in their dishes (thankfully, that element wasn't a requirement). 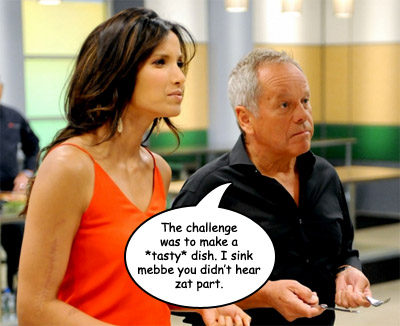 Apart from Sheldon, who made a boring stir fry with skirt steak that elicited the comment "it tastes like pedestrian Chinese food" from Wolfie, the cheftestants were pretty creative. Brooke, who used her fifteen minutes to whip up some Vietnamese caramel sauce for squid, won the challenge and immunity from elimination in the next challenge...which is...

Each cheftestant is tasked with coming up with his or her own restaurant concept and a single dish with which to represent it. They will create 200 portions of this dish and serve it to participants at a foodie event called Bite of Seattle. The two best concepts and dishes will go on to head up the Restaurant Wars teams. But then one chef will be eliminated, making for lopsided teams.

Big shot New York restaurateur Danny Meyer, of the Union Square Hospitality Group, is the guest judge for this contest. Did you know that he was once Tom Colicchio's boss? Did you care? Me neither. But still, Meyer is a hot shot, and a pretty good-looking guy. And rich. Padma giggled a lot around him. Guess it's about time for another baby daddy, before she gets too ancient. 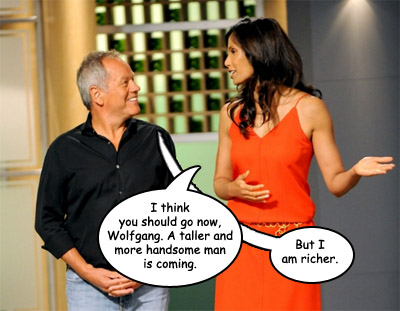 Three of the chefs choose to do their shopping at Uwajimaya, a well-stocked Asian food store that I wish we had here in Maryland. Love that place. The rest of the chefs go to someplace not Whole Foods. And then they head back to the kitchen to do the prep work for their dishes. Because it's a lot of work, they get help from four former cheftestants who will act as their sous chefs: Chrissy, Eliza, Carla, and Kuniko. I swear, this is the most quiet that Carla has ever been, surprising since Stefan grabs her to work with him. Micah, who is doing a raw food concept, is clever enough to assign fish butchery to Kuniko, who does a lovely job of meticulously cutting four types of fish into sashimi. Sheldon takes advantage of fellow Filipino Chrissy and excitedly tells her that he's making "gobble gobble whatzit." Perhaps I should have written it down, but it's apparently sour tamarind soup. Sinigang maybe?

Tom comes in to be nosy and questions the chefs on their concepts and dishes. Mustache is doing a neighborhood restaurant and calling it Bistro George after his late dad. He's not making pork this time - wise decision. Lizzie was entranced by travel through Northern Italy and is making what she calls "farmhouse kitchen Italian." Stefan is doing Thai by way of Germany, which doesn't seem to make sense at all, but that's Stefan. Brooke has chosen to make non-Kosher Jewish food, and Kristen is doing contemporary French. Josie's honoring her Miami upbringing by celebrating Cuba.

The next day happens to be Sheldon's 30th birthday, and we find out that he's already cranked out three daughters. He's hoping to get his hands on one of those bonus 10K prizes that come with winning this challenge, because he's already got too many mouths to feed back in Hawaii, and that Spam shit is getting expensive. And he might need a new hat. But you know - birthday curse. Of course, Stefan celebrated his 40th birthday a few weeks back and he's still around. Even if he hasn't done squat as far as cooking winning dishes is concerned.

The cheftestants head to the event venue and prepare their stations. Each has a little chalkboard introducing their restaurant concept. Everyone seems to be set up but Josie once again is having trouble getting her food done on time. Apparently her mouth and hands have trouble operating at the same time, and her mouth seems always to be moving. 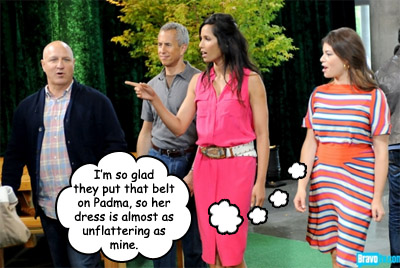 The judges show up to eat, Danny Meyer and Gail Simmons among them. They hit Mustache's table first and grab a bowl of his seared ribeye with cauliflower. They also visit Lizzie for a taste of her canederli (an Italian knodel, or bread dumpling) with fonduta and crispy speck. Mustache's is delicious and nicely cooked, but I think Danny Meyer said something about the meat needing seasoning. Lizzie's dish sounded terrific, but apparently was leaden and uncooked in the middle, and her fonduta resembled a slice of American cheese draped over the top. Ouch!

Sheldon served up his sour soup and the judges loved it's elegance and authenticity. Stefan's Thai by way of Munich concept, however, was disjointed and the two dishes he served - Thai soup and a mango lollipop - showed no German influence. 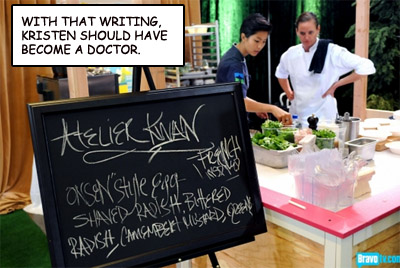 Micah's raw fish and veggie salad was pretty, but Tom was not impressed that he had all of the fish cut in advance the day before and not to order. He saw no soul in the dish. Meanwhile, Kristen hit all of the right notes with her onsen-style egg. An onsen is a Japanese hot spring, so I'm not sure what that all has to do with French cuisine, but the judges were utterly enchanted.

And then there's Josie, who gabbed and cooked while Tom and the gang waited and waited for their food. Her puerco asado was hard and dry and inedible. Gail felt the same way about Brooke's matzoh ball, calling it an offense to her people. But overall the judges enjoyed the other aspects of her non-Jewish Jewish food. I thought it seemed odd that Brooke spoke about her concept like it was new. Like she had never heard of fellow Californian Ilan Hall's popular LA restaurant, The Gorbals, where he puts bacon on his matzoh balls. 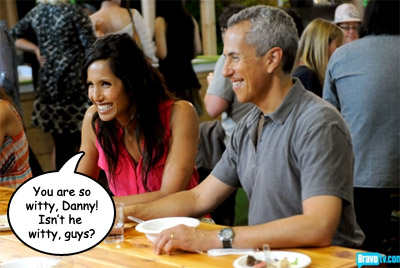 After eating, the judges do a quick pow-wow at the table and mention that they are not happy with Stefan, Micah, or Josie. Then they go to the Judges Table set and bring Kristen, Sheldon, and Mustache out. Padma announces that they are the top toques for this challenge, and Danny Meyer tells Kristen and Sheldon that they will be heading up the teams for Restaurant Wars. Tom tells them they have to pick their team from the people left in the stew room, but remember that one of them will be going home. Mustache seems put out that he didn't win, but hey, at least he wasn't on the bottom for massacring pork again.

Back in the stew, Kristen and Sheldon pick teams and it ends up being boys vs. girls, much to Stefan's chagrin. Then Padma comes back in for Micah, Lizzie, and Josie, and Kristen suddenly feels like she may be screwed. Fortunately for her, it was Micah's dish, which Tom did not believe came from the heart, that was the worst of the three. And Sheldon's team is down a member already.

Next week: Restaurant Wars! Stefan is front of the house! Judges are belittled! Josie is pissed at something! This will be fun!