I'm sorry the recap is late this week, but there's a very good reason for that. Rather than flip the channel to Food Network at 9pm on Sunday, we Minxes preferred to watch the Baltimore Ravens humiliate the New England Patriots right out of Super Bowl contention. GO RAVENS! 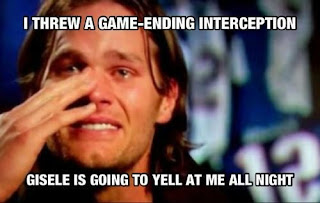 About 24 hours after the episode aired, we watched it OnDemand. Turns out we didn't miss much. The Food Network agrees - they didn't bother to put up photos from the episode until late Tuesday morning, and the videos are not loading. They need to get new intern-monkeys.

In any case, this week's challenge was meant to test the celebritynoncheftestants adaptability by making them short order cooks. Teams Rachael and Guy find themselves at Mel's Drive-in, a greasy spoon in Hollyweird. Wouldn't a road trip to Mel's Diner in Milwaukee have been more fun? That is, if they could travel back in time to the Happy Days era. They could serve burgers and fries to Fonzie and the gang. Instead, we have to watch them serve regular LA nobodies desperately wanting to be somebodies. Meanwhile, the Fonz is selling reverse mortgages. 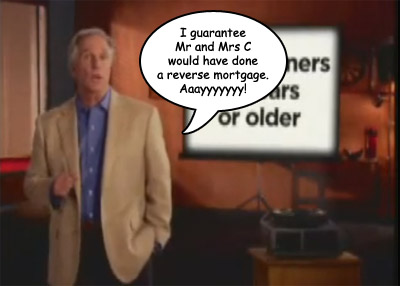 Hiney Warts thinks this challenge is perfectly reasonable because of the Guy factor. "All his shows is about triple Ds," he tells us. That's the grade I'd give Guy, too. A "D."

There are three celebs left per team, and there are three classic diner meals they have to prepare: a tuna melt; a chicken club; and a cheeseburger. Because Rachy's team won last week, they have the advantage of choosing the sandwiches for their adversaries on Team Guy. They assign the chicken club to Johnny, the burger to Chilli, and the tuna melt to Dean. 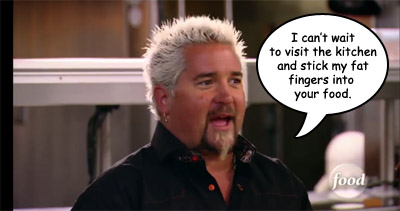 The teams go off to their respective trailers for some strategery. Johnny, who is wearing a spangled silver jacket and short shorts, plans to work the front of the house and be "real gay." Can you imagine how gay he can be when he actually tries? The mind boggles. Before being assigned the chicken club, he had planned to get away from using his favorite protein. And that would be...chicken. So to switch things up, he decides to do something super-radical and use something never before seen in a club sandwich. That's right - turkey. And he's going to make it "real gay." 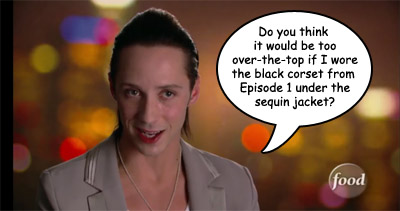 Dean isn't all that thrilled with the idea of a tuna melt. He wants to switch his up by using olive oil instead of mayo, but Guy tells him he's used up all of the olive oil in his hair that morning. Chilli, who is turning into a real whiner in the kitchen, says she don't grill, honey, so she don't know how she's going to make a burger. Guy proceeds to tell her to make a ball of meat, smash it on the grill, and then use a dome spritzed with water to melt the cheese. Easy peasy. Chilli almost falls off her chair trying to process the technique.

Over on Team Rachael's side, she's advising her squad to stick with traditional diner chow, and not to "gourmet it up." But then she's fine when Carnie starts babbling about the amazing tuna salad she makes with tons of herbs and stuff. And then she tells Hiney to add chorizo or bacon to his cheese burger. Then there's Kathy, who's volunteered to work the front of the house. She's not putting any meat in her chicken club, no sirree. Rachael then suggests that she do a double-decker grilled cheese sandwich with seitan bacon. Fresh herbs, chorizo, and seitan are definitely traditional diner foods.

Team Guy gets the kitchen first, with one hour of prep time before 45 random folks come in to eat. Funny how these celebs pretend to like to cook, but only Dean seems to know how to do anything. He's not team captain, but he gets pulled into Johnny's and Chilli's dramas and has to teach them how to use the food processor and whatnot. 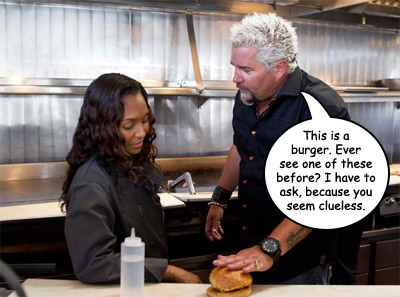 Guy comes in to sniff and sneer, and he gives Johnny some advice on how to cook his turkey. Johnny is ever-so-thankful because, as he says, Guy is a "professional." Yes. Guy is a professional. A professional douche. With a sunburn over a spray tan.

Prep time is over and Johnny puts his spangly jacket back on so he can wow the crowd with gayness. He sashays and wiggles and everyone seems to love it. But it doesn't distract anyone from the bad food. Dean's run out of cheese for his tuna melts, and the diners notice. Johnny's bread is not toasted enough, but that's not his fault. He's generating plenty of flames in the dining room. Chilli's freaking out over the complicated burger technique (ball, smash, steam with dome) and working very s l o w l y. The customers are getting cranky, so Johnny ups the gay/distraction quotient by putting on roller blades and skating around both inside and outside. Eventually, the burgers get done with some help by Dean but they're bland and un-special.

Next, Team Rachael takes the stage. Carnie is alternately freaking out and singing happily. 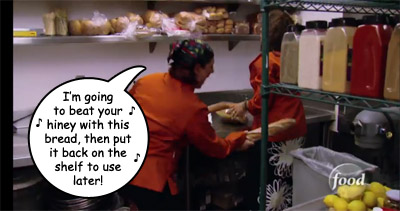 Kathy is making fifteen different components for her grilled cheese club, but the seitan bacon won't be one of them. She thinks it tastes bitter, but Rachael thinks she needs to include it for the crunch. Hiney has never even heard of chorizo, so he's putting bacon in his bacon cheeseburger. But first - he needs to learn how to use a food processor. Honestly, people, it's not that difficult. Put the food in. Push a button. Whirr. Carnie gives him instructions and Hiney is amazed that he's lived so long without using this machine. I'm just amazed he's lived so long.

Kathy goes out to entertain the guests but she's no Johnny Weir. She doesn't even have a sparkly jacket. Being a "vegetarian chef," while an amusing enough concept, just doesn't cut the mustard.

Carnie put her money where her mouth is with her tuna melt. And she probably put one of those tuna melts where her mouth is, too. She claimed that she made delicious tuna salad, and the judges and customers agreed. Her sandwich had great texture and, unlike Dean's, plenty of cheese. Hiney's burger, too, won raves, but he couldn't move quite fast enough to keep up with the orders. And this man was a wide receiver, someone who presumably had to think on his feet while both running and catching the ball.

Kathy's cheese clubs weren't making it out of the kitchen at all because Carnie was too busy singing and beating people with baguettes, completely forgetting that she was supposed to make Kathy's dish, too. When Carnie realizes her mistake, she curses Kathy's use of fifty-three different components, and Kathy comes back to help. Eventually her sammies come out, but it's pretty much a consensus that they needed bacon. Even seitan bacon. 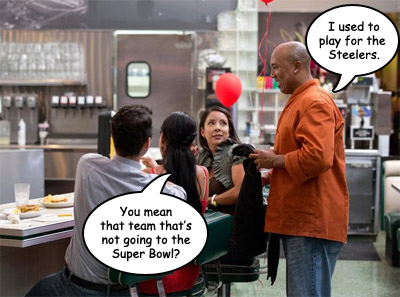 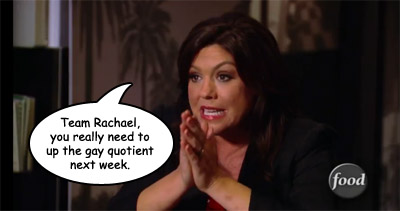 The customers chose Team Rachael as the winners, so that means the bottom two on Team Guy have to participate in the Blind Tasting Challenge. This would be Dean and Chilli, who are tasked with making a delicious milkshake in five minutes.

There are tons of mix-ins available, but Dean goes "adult" with his orange creamsicle shake with Grand Marnier and boozy Twinkie garnish. And I don't mean he got Johnny liquored up and put him on the edge of the glass.

Chilli tells us she's a mommy so wants to make a shake her son would like. I could have sworn she said her son's name was "Tron," and when I looked it up, I saw that it was, indeed, Tron. I guess there are worse things than being named after a bad 80s movie about video games. Just ask Atari Bigby of the San Diego Chargers. 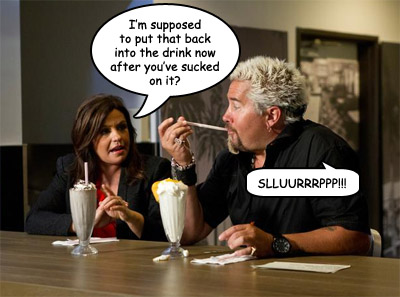 Both Chilli's chocolate cookie shake and Dean's orange shake are tasty, but the boozed-up Twinkie obviously win's the hearts of Rachael and Guy, because Chilli is sent home. Just as well, as she was getting on my nerves. They all are, actually. Where's LDP when you need him?

Next week: my idea of hell. A kid's party.