Stuffing My Face in New York - Day One

My eating adventures in New York have been a regular feature on Minxeats for years. Check out the posts found here, here, here, here, here, here, and so on. Neal and I always ate well when we visited NYC, but since I met my friend Daisy in 2017, food consumption has gone up quite a bit. When Daisy and I get together, we may have 2-3 full meals, a couple of snacks, and a stop for drinks in an 8-hour period. Now, it's not constant eating; we do pop into various shops and boutiques that seem interesting, and always make time to sniff perfumes. But still--it's a lot of food consumed in a relatively short amount of time.
On my most recent trip, I met up with Daisy at Golden Diner. It's located in Chinatown, and the location reflects on the otherwise typical diner-style dishes. I ordered the chicken katsu club, featuring tender chicken cutlets, red cabbage slaw, blt, and bulldog sauce on the typical myriad slices of toast. Daisy had the Chinatown egg & cheese sando, the NY standby, but with exceptionally fluffy eggs on a sesame scallion milk bun. Now that I peruse the menu again, I kinda wish I had ordered the Thai Cobb, partly because of the clever name but also because it sounds delicious. 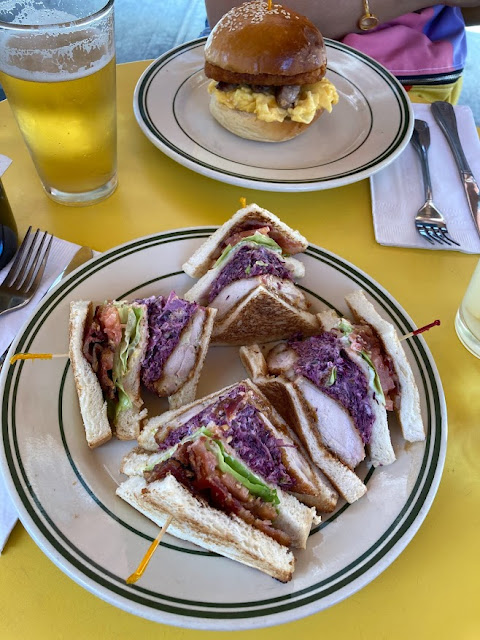 Let me backtrack a minute. The Golden Diner meal was at about 3:30pm on a Sunday. I had arrived in NY noon-ish, and after tucking my bags safely away with the hotel porter, I headed to a Thai restaurant near Penn Station called Random Access. I'd wanted to eat there for a while and had even made a reservation the last time I was in town, but plans changed.  This time, I was able to satisfy my curiosity about the place with an order of sriracha lime dumplings and an egg pancake. The former comprised steamed chicken dumplings with a spicy mayo, plus cilantro, red pepper, shallots, and coconut. The latter was a roti flatbread merged with an omelet, topped with squid, mussels, bean sprouts, kale, coconut, and a sweet sriracha sauce. Both dishes hit all the right spots, and were a flavorful contrast to the rather wan Thai food I had back home in Baltimore earlier in the week. 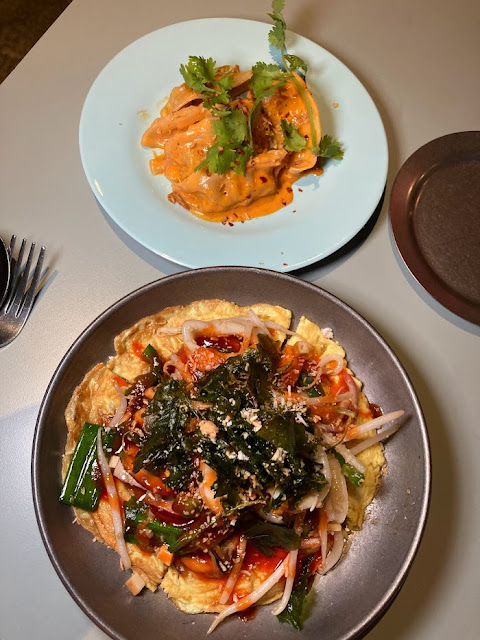 Now back to the Daisy-led Food-O-Rama.
We wandered around a bit before visiting Michaeli Bakery. We were there for donuts, but it was too late in the day and they didn't have much of a selection. Instead, we split a rugelach. The rugelach I'm familiar with are made with a sturdy cream cheese pastry and filled with nuts, jam, chocolate, or all of the above. This one was a tiny croissant-like pastry with a chocolate filling rolled into it. It was very good, if very different. 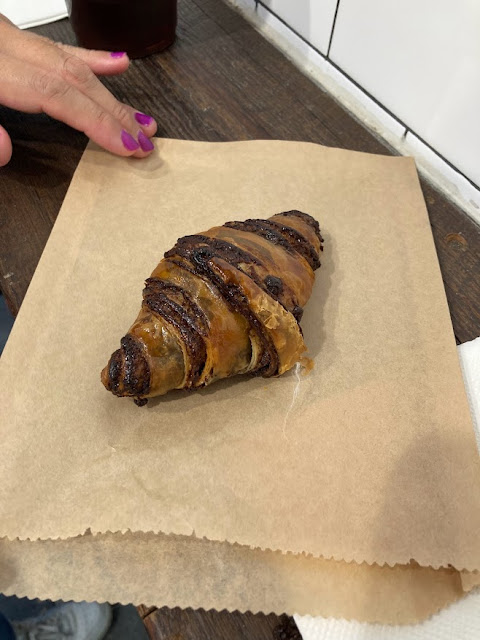 Our next stop was King Dumplings. It used to be a "dollar dumpling" joint when it opened a couple years ago, but now the price has gone up a few bucks. Ten really good pork dumplings for less than $5 is pretty amazing though. 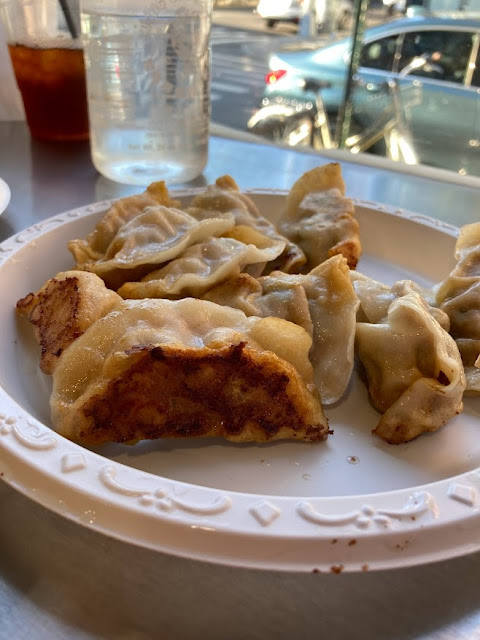 If you're counting calories, we're probably at 3500 so far.
Our next stop was Kopitiam, specializing in Nonya (Chinese Malay) cuisine. I wanted to try everything on the menu, but we settled on three dishes + dessert. We tried the Nyonya Bak Zhang, a dumpling of blue and white sticky rice with minced pork, mushrooms, winter melon, and salted egg, all wrapped in a mile of some sort of leaf (banana, I'm guessing). I was expecting something yummy like one of my favorite dim sum dishes, sticky rice in lotus. Sadly, the dumpling was cold and overcooked, the salted egg yolk was dried out, and the whole of it pretty flavorless. The tok tok mee made up for it, reminding me of chow fun with its wide noodles in a dark sauce studded with pork, shrimp, and other goodies. 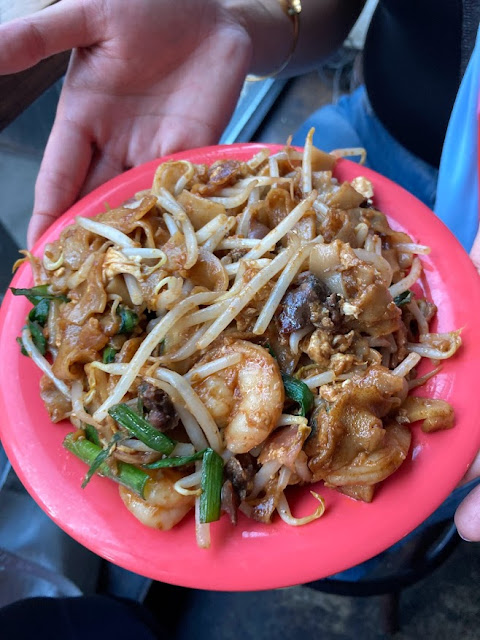 The pandan chicken was also tasty. The three triangular chicken meatballs were wrapped in pandan leaves and served with a sweet chili sauce. 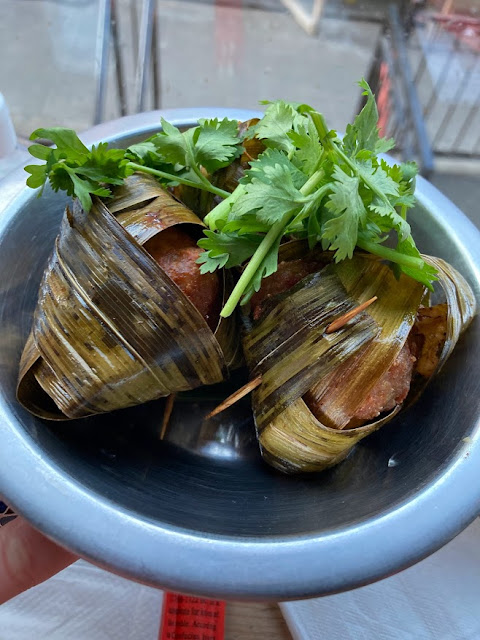 Asian desserts are not French pastries, so I shouldn't have been surprised when one of the items we ordered was on the gelatinous side. The kuih talam was described as salted coconut milk over a pandan cake base. Yes, those were the flavors, but the "cake" was not the western-style flour-based cake that I expected. The kuih lapis was a "1000-layer" cinnamon butter cake, rather like a crepe cake or maybe a Smith Island cake, only without any frosting. Both desserts, I think, would make a great afternoon snack with some tea. 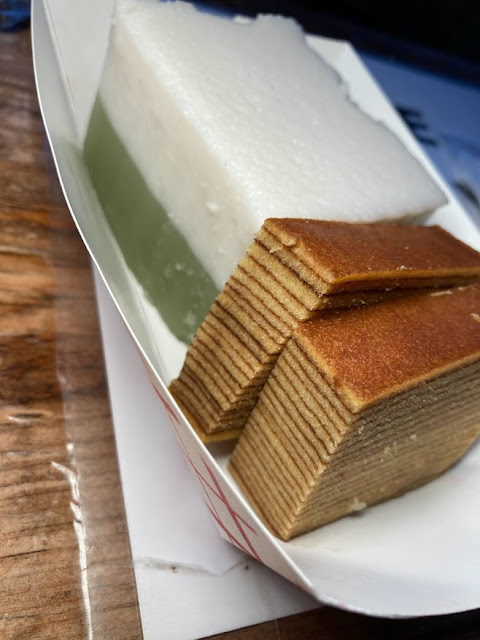 I opposed the idea of eating a burger next, so we parked ourselves at an outdoor cafe and enjoyed an adult beverage instead. There was plenty more to eat the next day.