I started off with a Cambodian sandwich of five spice-glazed pork belly at Num Pang Kitchen in NoMad. Like a banh mi, the sandwich involved meat, spicy mayo, carrots, cukes, and cilantro on a crisp baguette. I felt the pork belly was slightly tough and didn't have much of the advertised five spice flavor, but overall the sandwich had a nice combination of flavors and textures. 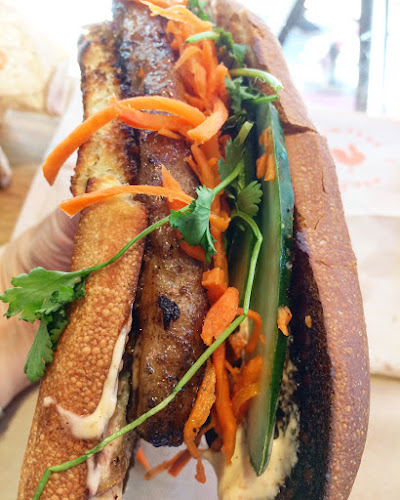 Later, after walking through the Fancy Food Show for a couple of hours, I needed a pick-me-up,. An Earl Gray milk tea with "3js" (boba, pudding, and herbal jelly) at Gong Cha--a tiny tea shop in Koreatown down the street from my hotel--looked good, and it was. Except that I picked up a skinny straw, which made drinking fairly impossible. Every sip was blocked by a big black tapioca pearl. Eventually I managed to finish the liquid and soft additions and ate the boba by shaking them into my mouth. Awkward, but tasty. 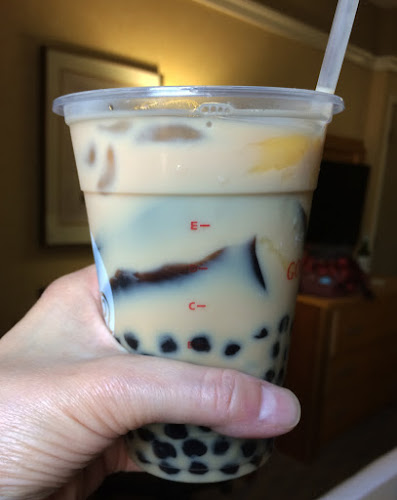 For dinner, my roommate--the beloved and legendary Dara--her friend Jeff, and I had Chinese food. The Pride parade had ended minutes before; 5th Avenue and its cross streets were eerily quiet, apart from the sound of street cleaning machines and leaf-blowers. Our first choice for dinner, Cafe China, was packed, with an hour wait for a table, so we wandered up a few blocks to the bigger and less-full Szechuan Gourmet. We ordered Szechuan Pork Dumplings with Roasted Chili Soy, Beef Chow Fun, Braised Whole Bass with Sichuan Chili Miso, and Braised Crispy Tofu with Chili and Sliced Pork. 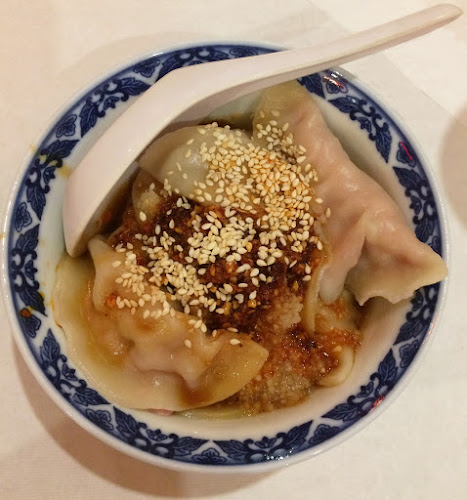 I used to love the Szechuan won tons at a place in Randallstown called Szechuan Best; they've sadly been closed for quite a number of years. The dumplings at Szechuan Gourmet were tender with a nice porky filling, but the sauce wasn't spicy enough and was also quite sweet. And garlicky. I was afraid to breathe near people for a good part of the next day because I was sure I had awful garlic breath. (Nobody recoiled in horror, I'm happy to say). 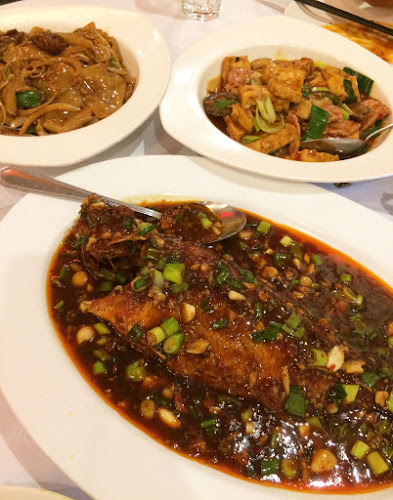 The fish was the best of the other three dishes, with tender meat in a tasty sauce. The tofu dish was odd, as something labeled "braised and crispy" should be. The tofu was not at all crispy, but it had been fried before braising, which gave it a firm-ish texture. The pork had been quick cooked, so it was tender, but curiously flavor-less. The whole dish was, actually. It was definitely the least-sweet Chinese dish I've ever tried, and also most bland. The chow fun was just ok, maybe a bit greasy, as it often can be, and seriously lacking in wok hay. The term "wok hay" means "breath of the wok," and refers to a particular quality that is achieved through cooking food quickly in a properly hot wok. It's rare, but most often I have found it in beef chow fun. Wok hay has a flavor that is hard to describe, but once you taste it, you will always recognize it. 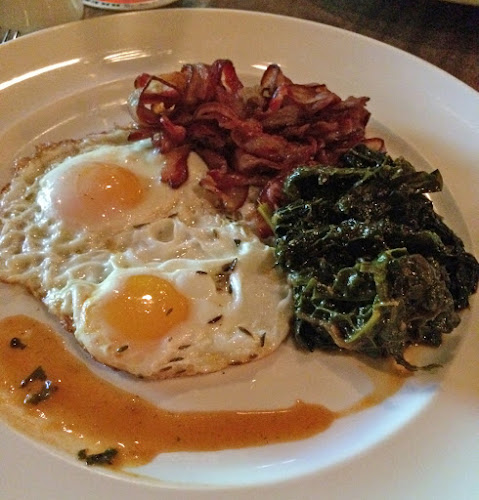 The next morning, I met my friend Daisy at The Breslin for breakfast. I think The Breslin is my favorite restaurant serving modern American cuisine in NY. It's close to my hotel, the food is good, and breakfast is uncomplicated yet not boring. I enjoyed my sunny-side-up eggs with harissa-braised kale and applewood-smoked lamb bacon, even without toast (which apparently is a la carte). The kale was super tender and lightly spicy, and the bacon tasted like...bacon. I wasn't even offended by the brown edges on the eggs, which are not usually the way I like them. Daisy had a lovely little charred ramp frittata, and we also drank plenty of coffee to fuel our day. She went to the Fancy Food Show, but I had other plans: perfume sniffing at Bergdorf's, Barney's, and Saks. 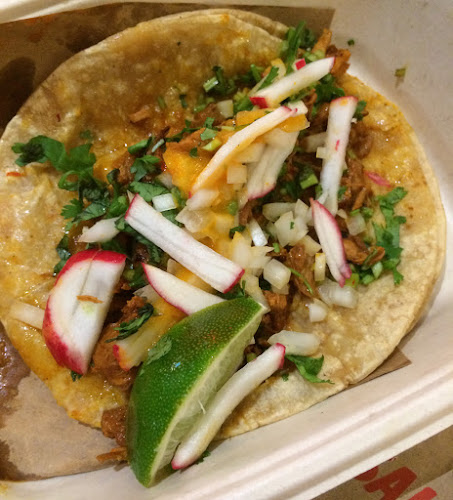 I figured that Urbanspace Vanderbilt was somewhat on the way back to the hotel, so after a disappointing morning of sniffing but not buying, I stopped in for lunch. Urbanspace is a food court near Grand Central Station with 19 vendors, including Roberta's pizza, Red Hook Lobster Pound, Dough donuts, and lots of other good stuff. After I walked around the place twice, I decided I wasn't hungry enough to eat anything more than a single al pastor taco from La Palapa Taco Bar. It was piping hot and fresh, good without being anything to write home about. The horchata I got to drink was excellent though. Next time, I'll go with a friend and skip breakfast.

Saks was next, then Penhaligon's. I did finally find a scent I liked--Creed Vetiver Geranium--but the price is a whopping $315. The sales associate said they were doing a $20 discount, which would have taken the price down to $295. I had $150 worth of gift cards, but even then, the scent would cost me $145--an insane price considering the over 50% discount. The SA at Penhaligon's was helping a couple, but still took the time to mansplain to me how to smell perfume. I left. 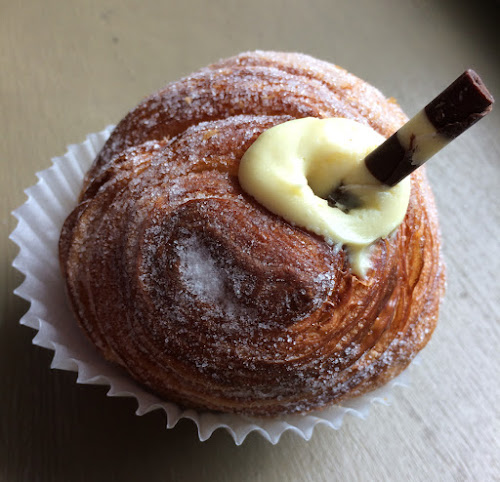 By the time I got back to the hotel, I felt I could use something sweet and popped into Paris Baguette next door for a treat. I had a "cruffin," one of the laminated pastry inventions inspired by Dominique Ansel's "cronut." Basically a croissant manipulated into a muffin shape, filled with a bit of vanilla custard, and garnished with a sprinkle of sugar and a chocolate straw, the cruffin hit the spot.

Later that evening, Daisy and I went on a Hornblower cruise to the Statue of Liberty. Sponsored by Urbani Truffles, the cruise involved loud live music and plenty of food: whole pig porchetta, arancini, truffled burrata, meatballs in truffle cream sauce, truffled pasta, risotto. Despite a decent dinner on the high seas, we stopped at Joe's Pizza for a slice afterward. 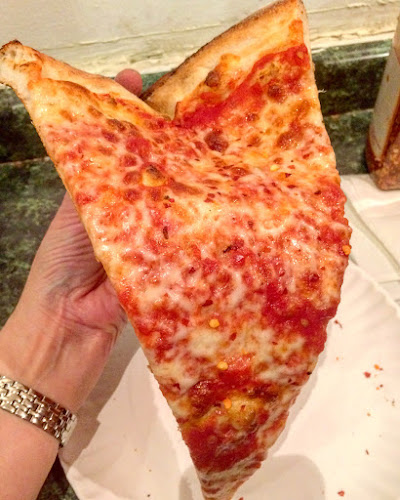 It was perfect--thin crisp crust that crackled when I folded it, an unsweetened sauce, and just the right amount of cheese. I'll definitely have to make a habit of stopping there when I'm near Bleecker Street. 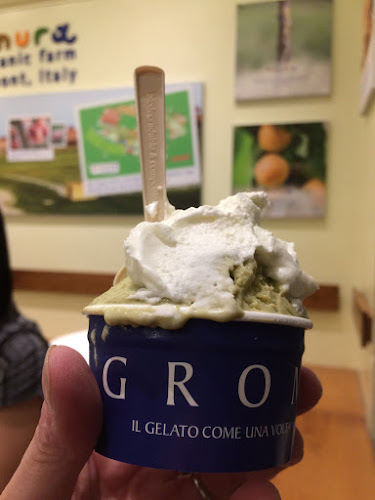 Grom was conveniently located a few doors down, so we stopped in for (very expensive) gelato. I don't remember the price being so astronomical on past visits; I'm betting the whipped cream (which I never had before) was the culprit. What other reason would two small gelati cost $16? In any case, I had pistachio and it was as delicious as ever.

We made one more stop at a cocktail bar called The Up & Up for a nightcap. I enjoyed The Quilt Room (Jim Beam Black Extra-Aged Bourbon, rooibos and rose hip tea blend, lime cordial, lemon juice, honey, and Angostura bitters) and should look more into making tea-based cocktails at home.

They call NY the "city that never sleeps," at least in a song. I can attest to the Herald Square area being very sleepy and deserted at 2:30am. My only company on the way back to my hotel were the homeless people snoozing on the sidewalks.

The next morning, I had absolutely no desire to eat breakfast. I needed coffee, because I was exhausted from lack of sleep, but my feet ached too much to look for a Starbucks. Instead, I went straight to the Javits Center for another day of Fancy Food Show wandering. I was happy to find a local vendor giving away decently-sized samples of cold brew coffee right out front, and I gulped one down before heading to the show floor (where I indulged in a latte from the Ethical Bean Coffee booth, as I usually do).

I was leaving for home after the show, but I had just enough time to stop somewhere for dinner. The idea of Korean tapas was intriguing, so I tried a few things at Barn Joo 35. I really wanted to try everything on the menu, but had to settle for just a few items. 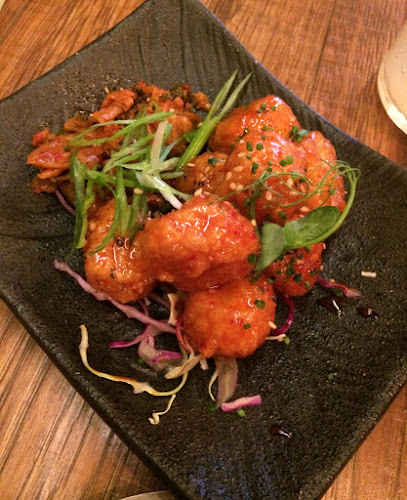 Check out the online menu, which is gorgeously photographed.

My waiter steered me toward the crunchy tofu balls with caramelized kimchi. It was a little on the sweet side, which I expect in Korean food, and the balls were indeed crunchy on the outside (and fluffy on the inside). The kimchi wasn't as intense as fresh (well, non-caramelized) kimchi, more mellow and sweet, and with a softer texture. I enjoyed it. 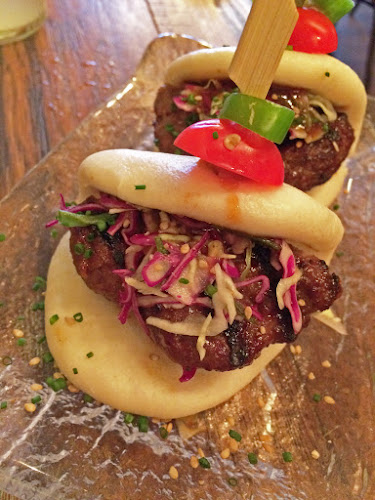 I also enjoyed the galbi buns. Galbi is normally made with flat-cut short ribs which cook up to a chewy deliciousness, but the filling in these buns was a more tender cut, perhaps conventional short ribs. They were lightly glazed with galbi sauce and topped with a scallion and cabbage salad and served in folded steamed buns. Two buns plus the crunchy tofu made for a nice medium-sized dinner. I also enjoyed a housemade yuzu soda because I felt it was too early for a cocktail. "What???" you say, "It's always 5 o'clock somewhere!" It was 5 o'clock in NY, but I was going to stagger several blocks with a very heavy backpack and didn't need any more impediments to walking.

I picked up three donuts at Underwest Donuts at Penn Station for Mr Minx before I boarded my train. Underwest was Underwhelming. The rest of the eats I had, however, were pretty darn good.