One of things I look most forward to every year is the Summer Fancy Food Show in New York. Not only do I enjoy going up and down the aisles of the Javits Center looking for new food trends and tasting everything from liege-style Belgian waffles to goat cheese, from maple syrup to ice cream, I also love eating all of the various things the city has to offer. And it has a lot.

I usually stay in Koreatown, where one can indulge in Korean bbq and soondubu jigae 24 hours a day. While I don't always partake in a full meal at one of the many restaurants around me, I usually stop somewhere for a snack and always for pastries. 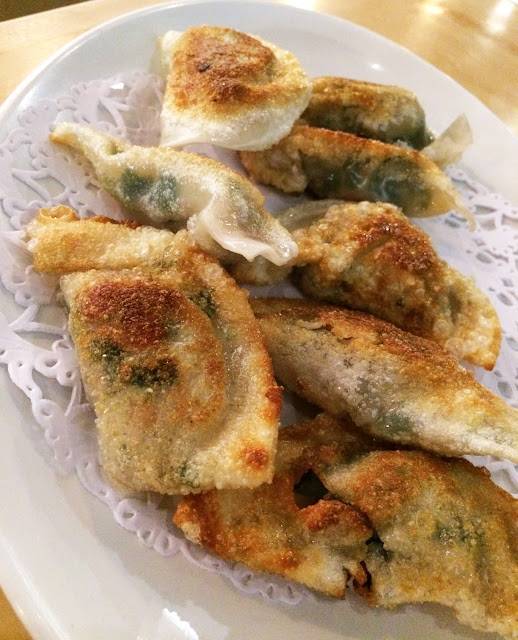 This trip, I popped into Mandoo Bar for a snack of goon mandoo, or crisp fried dumplings stuffed with pork and greens. I wasn't sure I could eat all ten dumplings, but they were so good, light and greaseless, I dispatched them without much effort at all. 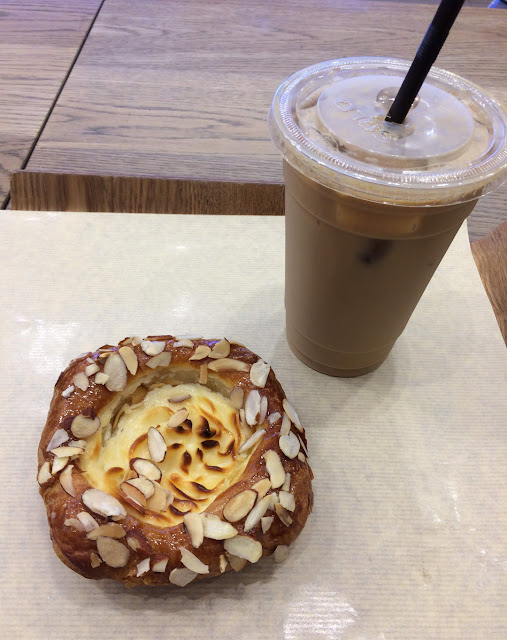 There are two pastry shops that I frequent, Paris Baguette and Tous les Jours. The first is great for flaky pastries, like this danish-like creation of crisp glazed croissant-style dough filled with cheese and topped with toasted almonds. Paired with an iced milk coffee, it was a good start to my day of perfume shopping. I didn't stop for lunch until about three that day, and when I did, it was to grab one of the several weirdly delicious hot-dog-filled pastries at Tous Les Jour. Imagine a cheese danish, but savory, with a hot dog stuck in the middle and a drizzle of ketchup and onions. 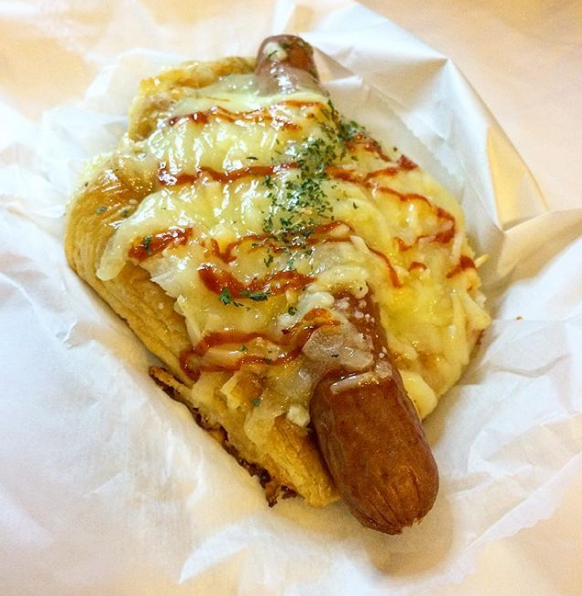 I also bought several donuts for Mr Minx and a couple of the sausage-looking chewy rice sticks for me to eat when I got home.

More sweetness was had at Spot Dessert Bar in Flushing. (There's one on 32nd Street in Koreatown, too!) They serve trendy, perfectly Instagrammable desserts, like the Harvest: layers of berries and soft cheesecake topped with oreo crumbs served in a small flowerpot, with black rose milk tea for "watering," and raspberry sorbet. So cute and also a nice combination of flavors and textures. 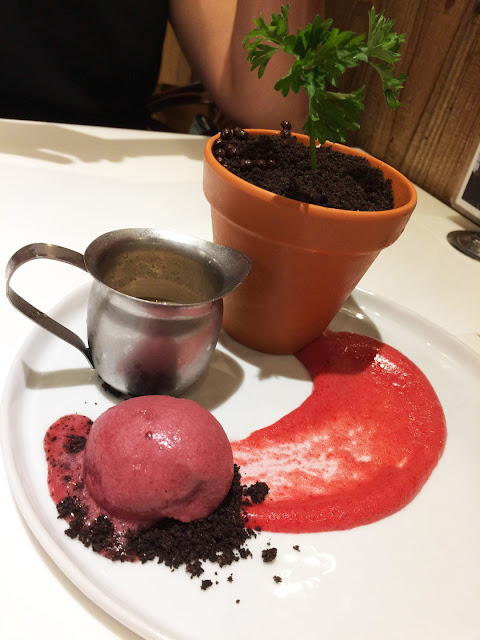 My partner in crime, Daisy, had the baked Alaska cone, which they bruleed at the table in order for her to film the action. 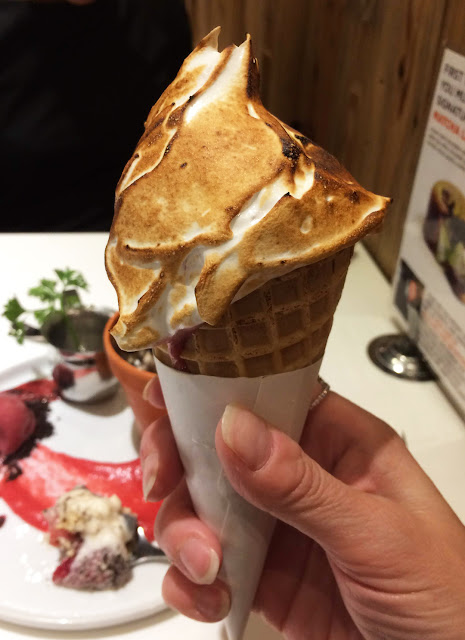 I had been to Besfren before for a cookie. It was February, and I wasn't into the idea of eating ice cream at that moment. This time, however, it was hot as hell and a frozen treat was very welcome. I had seen this matcha taro soft serve ice cream on Instagram many times, and can say it's as tasty as it is pretty. The texture could be more creamy/thick though, IMHO. 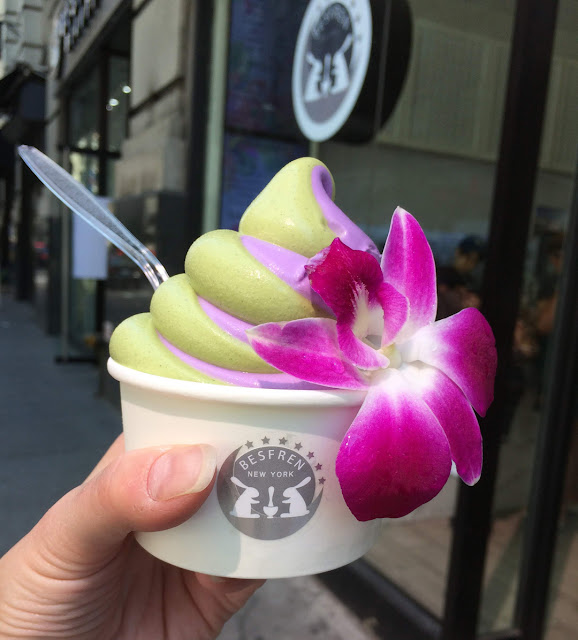 A few doors down from Besfren is Keki Modern Cakes, home of the famous Japanese "bouncy" cheesecake. Another Instagram darling, this cheesecake isn't the most photogenic thing in the world, but it is delicious. My roommate Dara and I put a hurting on one while having a serious conversation about life; I took another home to Mr Minx, and that one didn't last long, either. 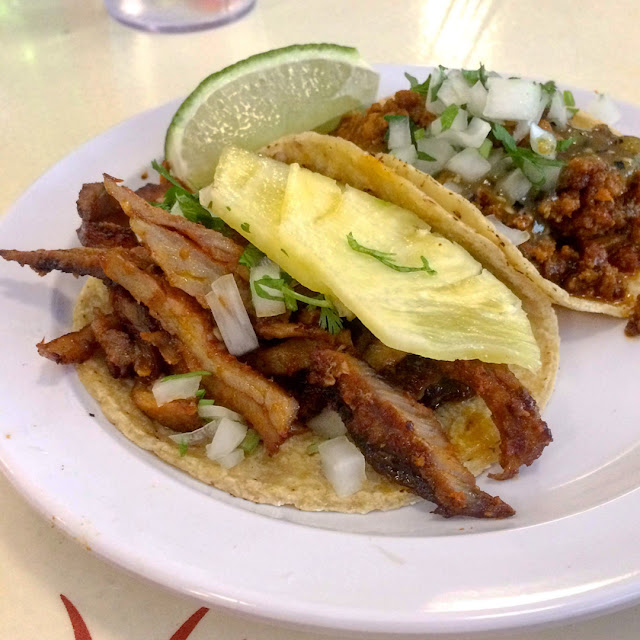 My trip to NY wasn't all sweet. I also popped into the branch of Tacombi in the Empire State Building two blocks north of Koreatown for some taco snacks. The tacos are smaller than average, and they only use one tortilla, so two tacos make for a light lunch. I tried the al pastor and the chorizo con papas. Next time I think I might go for a tostada.