I have always loved Chinese food and can still remember the taste of my very first shrimp in black bean sauce. I was on a "date" with my Dad. My mother had shooed us out of the house so she could have some quiet time with my newly-born baby brother; this makes me about 5 at the time. I had already eaten plenty of American-style Chinese food by that age, but the piquancy of the fermented black beans was a new flavor to me. And I liked it.

Sichuan food appeared on my table sometime in the late 70s, and though may palate was not yet accustomed to heat, I appreciated that the flavors and ingredients used were a bit different from the usual celery, onions, and starchy sauces used in familiar dishes like moo goo gai pan and chow mein. Though the Sichuan and Hunan dishes I ate in my youth were quite different from the ones I ate as a small child, they were still fairly Americanized.

In 2018, there doesn't seem to be as many Chinese restaurants in Baltimore as there used to be. Certainly no good ones (I am sure someone will be happy to argue that point). I've had a hard time finding even mediocre food in my neck of the woods. Thankfully, there is some really good Chinese food to be had outside of Baltimore. I've spoken here many times of my love for Grace Garden in Odenton, and for Hunan Taste in Catonsville. Asian Court in Ellicott City is my place for dim sum. And of course there are plenty of places in Montgomery County, which is a bit of a hike. Chinese food has gone from being a regular weeknight meal to something for a special occasion, but that makes me appreciate it all the more.

New Yorkers, however, don't have to struggle to find really fine Chinese food from many different regions of that vast country. There's a Michelin-starred Sichuan restaurant in Midtown, for god's sake, not to mention the five locations of Xi'am Famous Foods! Flushing, Queens, a half hour subway ride from Midtown, is rife with Chinese restaurants, which made it a bucket list destination for me.

My friend Daisy knew I wanted to eat good Chinese food when I was in NY, so she took me to Guan Fu, in Flushing. The New York Times gave it three stars, which normally doesn't happen to non-European ethnic restaurants. It had to be good, right? 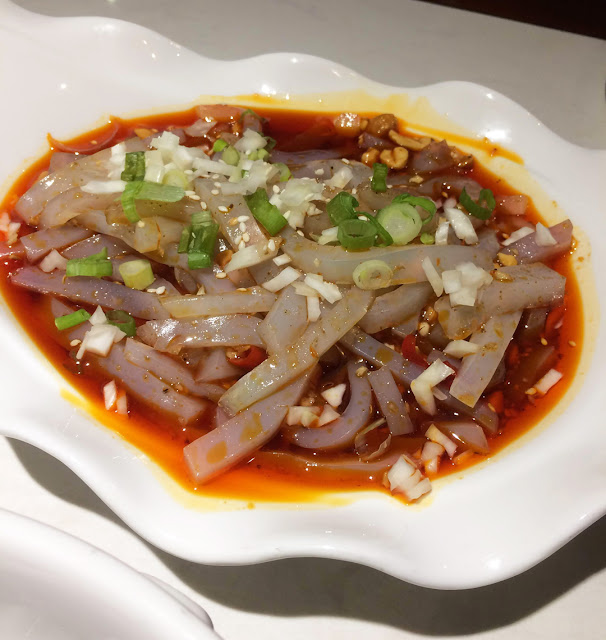 The restaurant is full of dark wood, with large tables to hold ample feasts. There are also comfortable wide chairs--which easily accommodate ample posteriors, like mine. The menu has photographs of every dish, which is nice, but only makes one's choice more difficult. Everything looks great.

Daisy had eaten at Guan Fu before, and had tasted a good deal of the menu. I was happy to let her decide what we would eat. Or over-eat, as the case may be. We ordered five dishes, and did a pretty good job of finishing almost everything. It helped that only two of the dishes contained meat, and only one as the star of the dish, but none of them were small.

Dishes were served family-style, arriving at the table in the order in which the kitchen finished preparing them. The bean jelly noodle salad is served cold, so that came to the table quickly. It was spicy yet refreshing, the gelatinous texture of the noodles holding a chill quite well--much appreciated on a day that had reached 98°F. 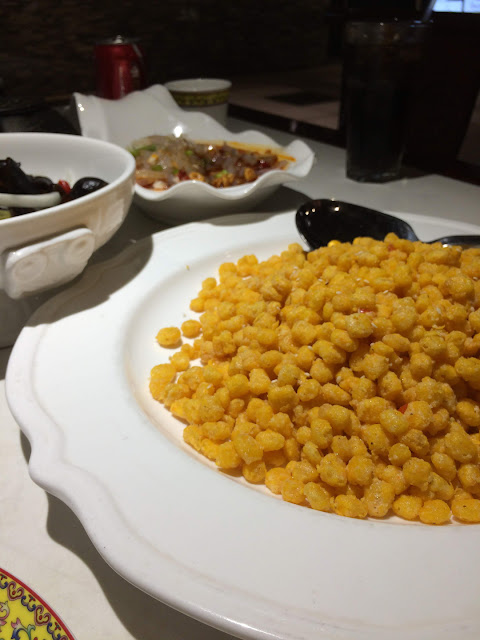 The Guan Fu style fried yolk corn was perhaps the most intriguing and unfamiliar dish. It was also the largest. The giant plate contained a mountain of fried corn kernels dusted in dried egg yolk; they were both sweet and salty, with a crisp-tender texture that made them a perfect snack. Except eating this dish was slow going, as chopsticks made it difficult to pick up more than one kernel at a time.

Speaking of chopsticks, Guan Fu has a novel approach to them. Rather than using coarse wooden disposable chopsticks, or plastic ones that require washing, they use chopstick handles with replaceable wooden tips. The tips come in little paper packages, which the diner removes before screwing the tips into place. This way they use much less wood and paper than traditional disposable sticks, and there's no doubt that the tips are sanitary. 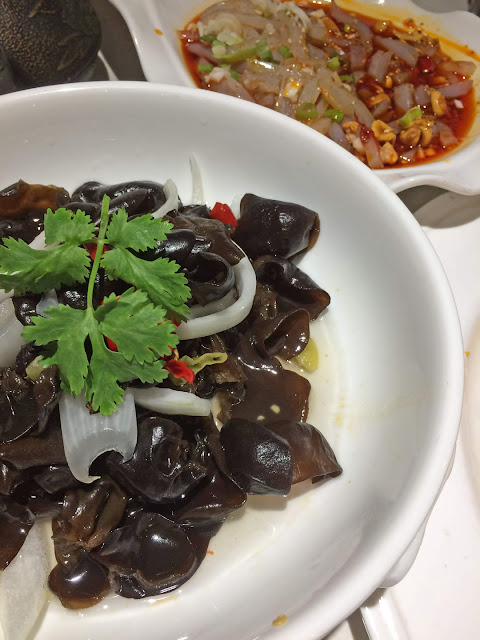 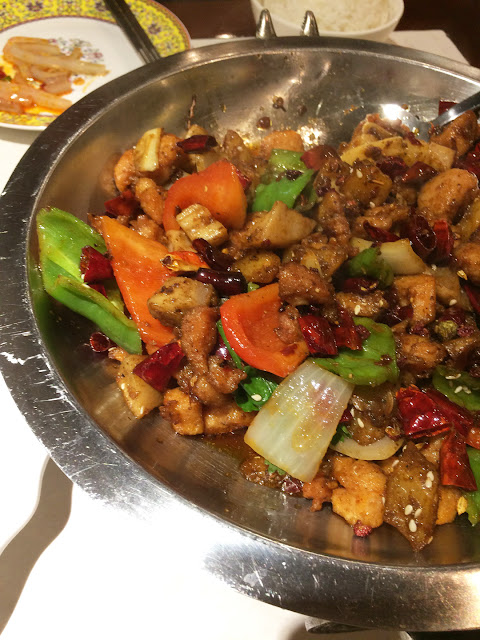 Our lone meat dish was a stir fry of chicken with Sichuan prickly ash. Prickly ash is a member of the citrus family, which explains why Sichuan peppercorns--which are actually buds--are somewhat lemony in flavor. Oh, and they have a numbing quality, too, with which those who have tried them are familiar. The combination of Sichuan pepper numbing and chile pepper heat is known as ma la, and this chicken dish was loaded with it--but not in an uncomfortable way. There were also bits of crispy potato and even crispier lotus root in the dish, which added some textural contrast. 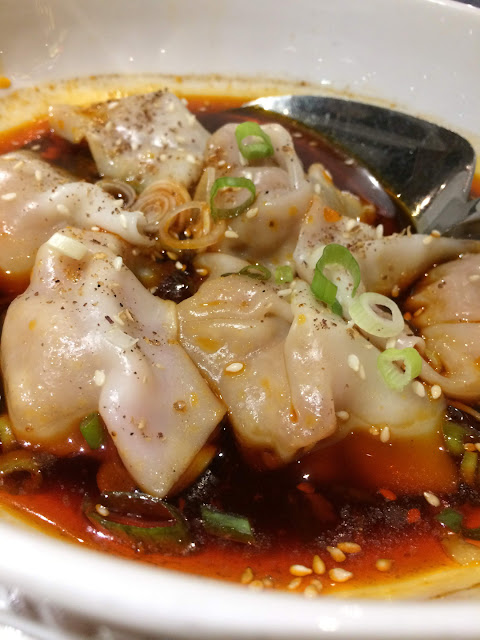 My favorite dish was the dumplings, which, oddly enough, appeared in the dessert section of the menu. I have been looking for a dish of dumplings in hot chile oil like the one served at a place called Szechuan Best, in Randallstown. We went there semi-regularly in the 80s, and I had to get the dumplings every time. The sauce was hot and oily and redolent of five spice. I think. It's been a long time, but I would know the flavor if I tasted it again. The dumplings at Guan Fu were not the same, though the delicate wrappers filled with pork seemed somewhat similar. The sauce, however, was its own thing. No five spice, and actually quite mild to my palate, but eminently slurpable. Now that I think back on it, I can understand how their relative mildness (only two chile peppers) might be a relief after eating an otherwise highly-spiced meal.

Overall, I liked Guan Fu. I think it's on par with Grace Garden and Hunan Taste, and I'm happy to have been able to compare them so favorably. However, each restaurant has its own personality. I'd definitely like to go back to Guan Fu and get to know it better.