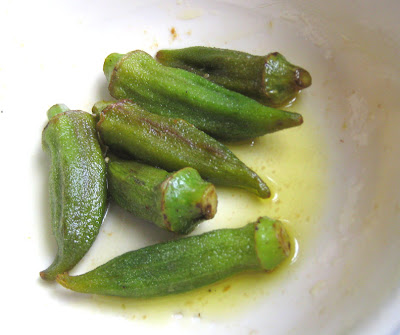 Okra is a very maligned vegetable. People who have never even tried it will make a face and say, "eww, it's slimy!" Oh grow up. Give it a chance before you judge it.

I find the texture of lightly-cooked okra is better-described as "creamy." It's really only slimy if you slice it while raw and then rub your fingers in it as it oozes on your cutting board. (Oh, just toss it into a hot frying pan, you wuss.) Yes, okra does contain a bit of goo that binds the seeds together, but so do tomatoes and cucumbers and I've never heard anyone complain about them. Plus, okra isn't eaten raw; once it's cooked, any of the ickiness that makes adults flap their hands in distress completely dissipates.

"But how does it taste?" ask the okra virgins. I think the earthy green flavor is like a combination of mushrooms and corn, both of which rank among my favorite things to eat. Your mileage may vary (I know there are mushroom haters out there, too).

There's no better way to eat fresh okra than to sauté it in a hot pan with a bit of olive oil and butter until the pods are tender (five minutes or so). Add salt and pepper and eat 'em hot. Okra's also good dipped in flour/egg/bread crumbs and shallow-fried until brown and crispy. Stewed sliced okra, cooked with tomatoes and spices is also nice, as is the classic okra-enriched gumbo. And a good gateway experience for some people might be okra pickles. (I've seen Talk of Texas brand in most area supermarkets.) They're crunchy and garlicky and great in a vodka martini.

Besides tasting good, okra is low in calories and high in fiber, folate, calcium, potassium, phosphorus, and vitamins C and B6. So really, there's no good reason *not* to eat okra.

Okra season might be over (or close to it) but whole and sliced pods can be found in the freezer section of many area supermarkets. Give it a try; you might find yourself liking something new.