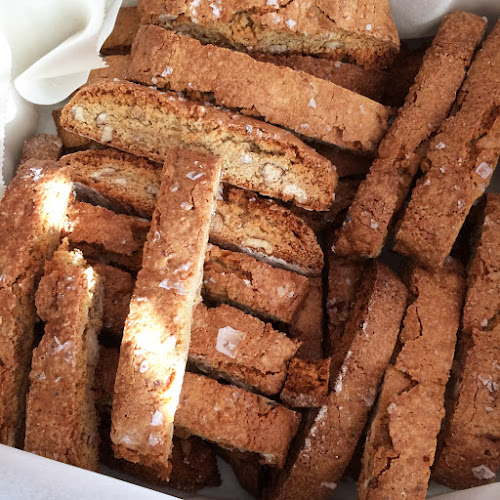 In my family, one either likes biscotti or they don't. My Dad and I have always been fans of the Italian cookies, the crunchier the better. (So much nicer to dip into coffee or tea if they don't immediately fall apart!) I have made them now and again, and he and I are pretty much the only consumers. Mr Minx has always contended that he does not care for the cookie. Until now.

I wanted to get a head start on making biscotti for Christmas, along with all the other various cookies we always bake, and thought I'd try a new recipe. I found one from King Arthur Flour that sounded great--maple walnut. I love both flavors, and we happened to have both ingredients on hand. I still had some of the little sample bottles of Runamok Maple syrup that I picked up at the Summer Fancy Food Show last year, each containing about 1/4 cup. The recipe called for 1/4 cup of syrup, so it seemed like kismet. But the only flavor we had a full bottle of was the Rye Barrel Infused one. Which of course tastes and smells like rye whiskey. So I sloshed in a wee bit of Old Overholt, too.

These biscotti are super crunchy, with a subtle maple flavor and a hint of something-something from the rye. Mr Minx ate several without my prompting, proclaiming them "very good." Perhaps he is coming around to enjoying super crunchy cookies and won't turn up his nose at them in the future. Or maybe I just got these exactly right for his tastes. In any case, they're certainly something I plan on baking again. Dad, of course, loved them too.

Line two baking sheets with parchment. Spread the walnuts on one sheet in a single layer and toast for 8-10 minutes in the preheated oven, until they're light brown and fragrant. Allow nuts to cool. Reserve baking sheet and parchment.

In a bowl, beat the eggs, sugars, maple syrup, and rye whiskey. Add the butter, beating well to combine. Add the flour, baking powder, and salt. Stir in the nuts.

With floured hands, pat the dough into two rectangles each about 10" long x 4" wide and 1/2" thick on the parchment-covered baking sheet. Wet your fingers and smooth the tops. Sprinkle with sea salt.

Bake dough for 30 minutes. Remove baking tray from oven and let cool for about ten minutes. 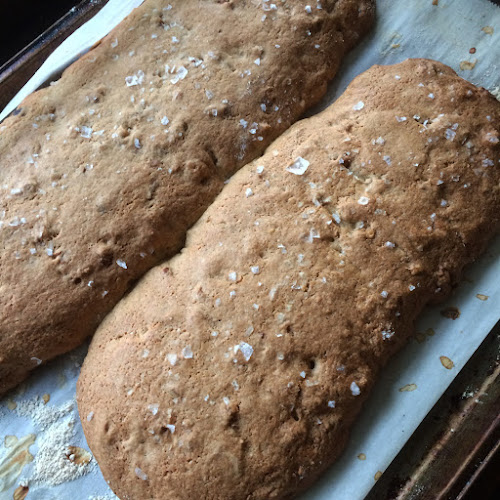 With a serrated knife, slice the loaves into 1/2" thick slices. Place the slices, standing upright, if possible, in a single layer on the second parchment-lined baking sheet. If you need more room, use the sheet that the dough was baked on as well.

Bake for 18-20 minutes, turning once if biscotti are on their sides, not at all if you were able to get them to balance upright.

Allow cookies to cool completely before storing in an airtight container.