When we were given a preview of Cosima restaurant in December of last year, we knew we would be back to try their Sicilian-style cuisine as soon as it opened. Of course, life got in the way and we couldn't seem to find the right time to return. By August, when my brother-in-law asked me where I wanted to eat for my birthday dinner, I knew this was the perfect opportunity.

We were lucky enough to go on a evening when the weather was mild and the outdoor patio was open. It's certainly a scenic view, surrounded by the old mill architecture with the light rail trains trundling nearby and the Jones Falls burbling below. The four of us decided to start our meal with the gnocchi di ricotta al forno and polpette, or mamma's meatballs. We had sampled the meatballs during the media preview so we knew we had a winner there. They were tender and flavorful in a marinara sauce topped with a healthy dollop of ricotta. The gnocchi were fluffy pillows of softness blanketed by a rich blend of Italian cheeses.

The fritto misto di pesce was a pleasant mix of seafood deep fried in a light batter. While the calamari and shrimp were of course familiar, the smelts were a new sensation. I enjoyed the crisp texture and strong seafood flavor. 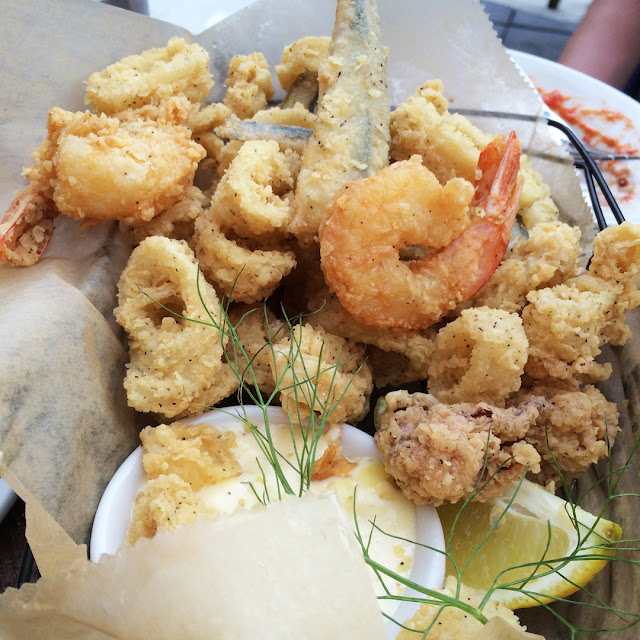 A pizza from their wood-fired oven was also a must for us, so we ordered the pizza cape sante di pancetta: smoked baby scallops, smoked mozzarella, basil, caramelized bacon, and tiny whole onions. This was probably my favorite dish of the whole evening! The crust was crisp yet chewy, the baby scallops were tender, and the overall smoky quality brought a welcome depth of flavor. 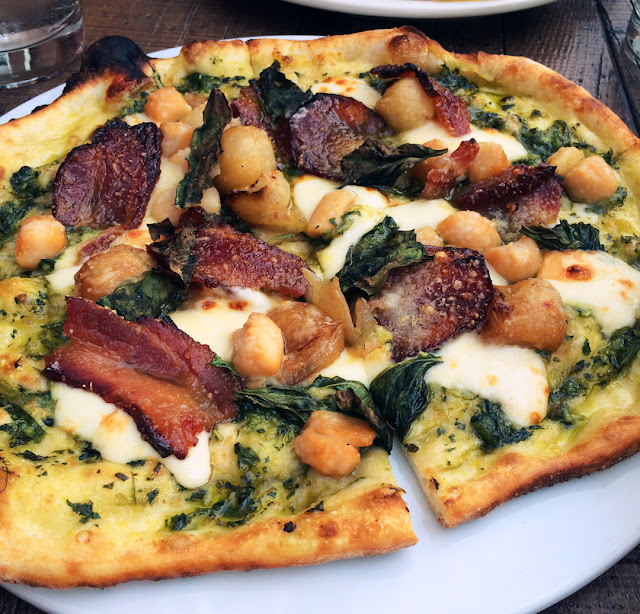 Being the typical oinkers that we are, we also order three entrees to share. (Had we realized how large the entrees are at Cosima, we might have ordered only two or even one, especially after all those apps.) The polpettone, or meatloaf, was essentially a giant meatball with a hardboiled egg hidden inside, or an Italian-style Scotch egg without the outer crust, if you like. We also ordered the pesce alla griglia, a whole grilled bronzino with a kale salad, and the ragu di maiale brasato, slow-cooked pork ribs with fennel sausage and pancetta in tomato sauce over polenta. The Minx thought the polpettone might be overkill since we already had meatballs, but the texture of the meat was firmer and seasoned differently. The only issue was that it was slightly underdone in the middle. We took that portion home so I could crisp it up in a pan and add it to marinara sauce for spaghetti. (Leftovers rule!)

The bronzino had light, flaky flesh and the kale salad was a refreshing companion. I was also able to take the fish carcass home and use it to make the stock for a pho-style soup later in the week.  Of the three, I especially enjoyed the slow-cooked pork ribs. The tender meat swimming in the rich, hearty sauce and the polenta made for several unctuous mouthfuls before I decided I was stuffed and called for a large doggie bag. 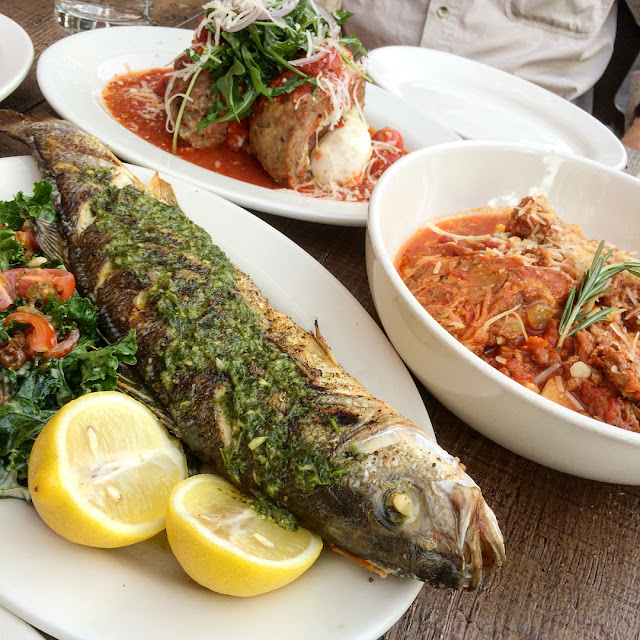 I was always sure that the food would be terrific at Cosima and I was not disappointed, but I was also pleased with the friendly service we experienced. Even executive chef and co-owner Donna Crivello came out and greeted each table to make sure everyone was satisfied with their meals. Between the lovely setting, the great food, and the warm atmosphere, this is a place I hope to get back to again soon.