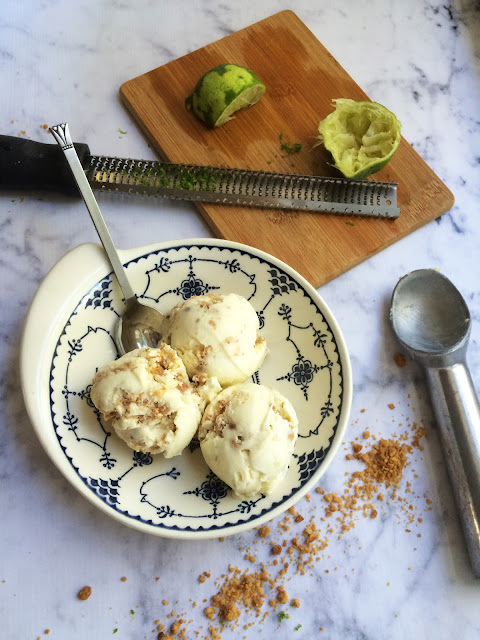 Back in the day, we had an ice cream maker, one of those Donvier things, and once in a while I'd whip up some simple, no-cook, dull flavor of ice cream. But turning the crank was a bore, and we had to wait to eat the stuff because it was always too soft to consume immediately. Now we have a fancier electric Cuisinart ice cream maker that requires no effort on my part except to plug it in and push a button, so I want to make ice cream all the time. And I find myself creating more interesting and intricate flavors to go with the less-basic equipment.

I get a regular email from an outfit called Book Bub that offers cheap e-books. Really cheap, like $1.99. Recently, Jeni's Splendid Ice Creams at Home was on offer, and I couldn't pass up adding it to my growing library of ice cream cookbooks. Jeni's is a pricey super-duper-premium brand one can find in specialty supermarkets; it owes its creamy texture not to the usual eggs, but to a cornstarch and cream cheese combo. I flipped through and decided that I didn't want to use any of the flavors presented therein (at least not right now), but would make one of my own, using Jeni's technique: key lime pie.

Key lime pie is crazy simple. Basically, it's sweetened condensed milk, lime juice, and eggs in a crust. Seemed like an ice cream would be equally easy. I borrowed the base from Jeni's lemon ice cream and substituted sweetened condensed milk for half the regular milk and lime for lemon. I also toasted some graham cracker crumbs (crushed Teddy Grahams) to mimic the crust.

The original lemon ice cream required a lemon syrup that was added to the cooled base while it was in the machine, I assume to prevent any curdling. So I made a separate lime syrup as well, but found that the sweetened condensed milk had thickened the base considerably. Rather than trickle the syrup into the base as it churned, I dumped it all in and gave it a good stir. That seemed to work fine. The end result was amazing - the texture was perfect, creamy and rich, with a nice lime flavor and crispy bits of crust. It tasted exactly like key lime pie. Do try it for yourself and let me know what you think! 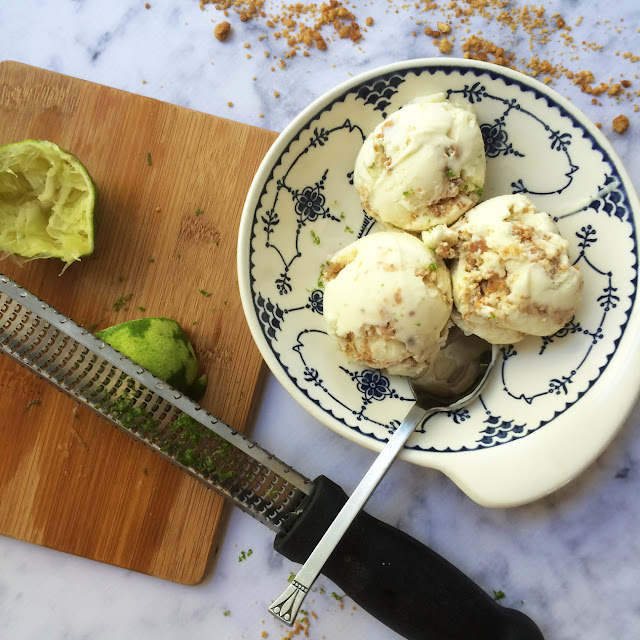 With a microplane, zest three of the limes and reserve. Halve the limes and squeeze enough juice to make 1/2 cup. (We had enormous limes and only needed two.) Combine juice and sugar in a saucepan and bring to a simmer. Stir until sugar dissolves. Remove from heat and refrigerate until cold.

Mix 2 tablespoons of the whole milk with the cornstarch to make a slurry. Whisk the cream cheese and salt together until smooth. Prepare a shallow ice bath: in a large bowl or baking pan, place an inch or two of cold water and several ice cubes. Set aside.

Cook the remaining milk, cream, sugar, corn syrup, and zest in a large saucepan until it comes to a rolling boil, Bring for 4 minutes, watching carefully so it doesn't boil over (stir when it starts to expand), remove from heat, and slowly whisk in the slurry. Bring back to a boil over medium-high heat and cook until slightly thickened, about 1 minute. Blend a few tablespoons of hot milk mixture into the cream cheese to loosen it, then pour the cream cheese mixture into the pan of milk. Whisk well until smooth. Pour into a container with a tight-fitting lid and place the container into the ice bath until cool, ensuring that the water level doesn't come up as far as the lid. When the mixture seems somewhat cool, refrigerate until completely cold.

Preheat oven to 350°F. Combine the crushed graham crackers and melted butter so all the crumbs are coated. It will seem a little dry. Pour onto a foil-lined baking sheet and pat out into one thin layer. Bake for 10-15 minutes, stirring occasionally, until lightly browned and toasty-smelling. Remove from oven and set aside to cool.

Stir lime syrup into chilled ice cream base - base will be very thick. Freeze ice cream according to manufacturers instructions. Once ice cream is done, scoop some into a lidded storage container. Layer on some of the crust crumbs. Continue to add ice cream and crumbs to container until both are used up. Press a piece of wax paper onto the surface of the ice cream. Seal container and freeze until firm, at least 4 hours.