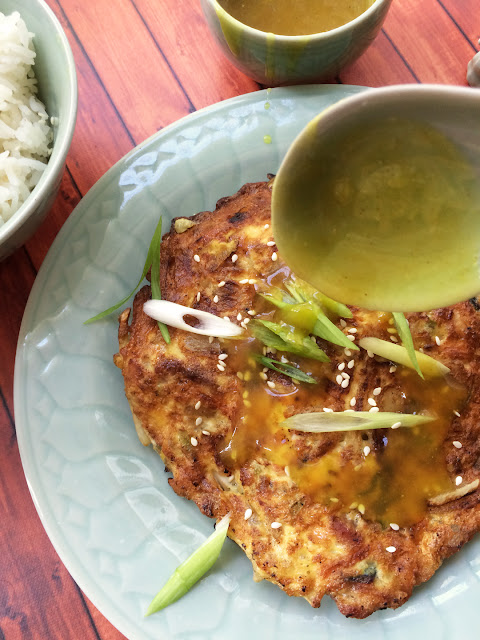 I recently found a blog I really enjoy - The Woks of Life. It's written by a family of four Chinese Americans who clearly love food. The vast majority of their recipes are for Asian goodies, particularly Chinese, but there are also things like corn muffins, pancakes, chocolate cake, and fusion-y things like Buffalo chicken potstickers. The writing is chatty, and the photography is downright beautiful. I'm not big on blog posts that have a lot of photos, but I give these guys a pass.

What really struck me, besides the photos, is that the recipes were all accessible. Of course it helps that we have so many of the required Asian ingredients on hand already, but nothing seems un-do-able, even the recipes with multiple steps.

This recipe for egg foo yung is one of those multiple step dishes. I really needed to read the recipe twice before starting. The original calls for deep frying the egg patties, but pan frying is more my jam. Much less oil is needed, and a skillet does just as good a job as a wok, IMHO. The patties might not be as crisp or fluffy as those produced by deep frying, but honestly, I've only ever eaten egg foo yung that was drowning in gravy, so never realized it was supposed to be fluffy or crisp!

The only real issue I had with this dish was the seasoning. It needed more salt. The recipe calls for low sodium chicken stock in the gravy, along with an admonishment to not overseason it. But I found the patties to be fairly bland. There is no seasoning in them other than the soy sauce used in the chicken marinade, so I doubled that amount to 2 teaspoons. I also used regular chicken stock for the gravy and found that I needed to add a pinch more salt because it, too, was bland to my taste.

Also, my local grocery store did not have bean sprouts, so I substituted broccoli slaw. While not as tender as bean sprouts, the slaw did not detract from the dish in the least. 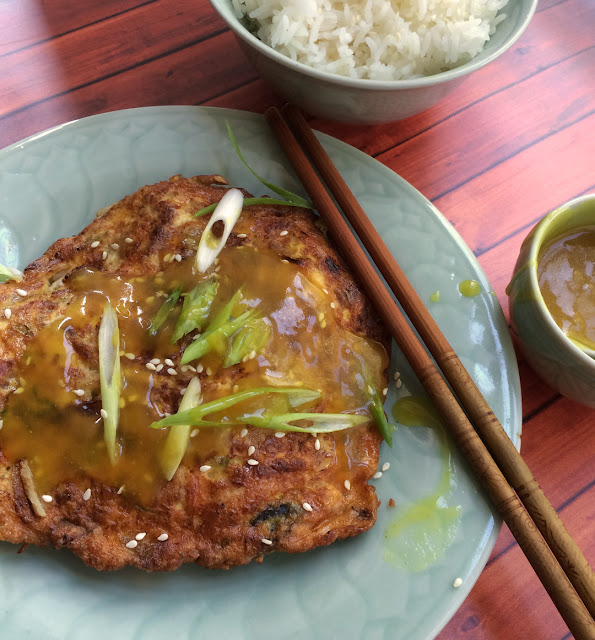 Leftover patties, btw, make for terrific breakfast sandwiches. Just warm one up, slap it between two pieces of lightly toasted bread with a bit of butter or mayo and voila! Instant omelette sandwich.

Chicken Egg Foo Yung, adapted from The Woks of Life

To make the patties: Mix the cubed chicken with the soy sauce and 1 teaspoon of the cornstarch until well combined, and set aside while you make the gravy.

Heat 1 tablespoon of oil in a large non-stick pan and add the marinated chicken. Sear for 2-3 minutes on each side. Transfer back to the marinating bowl, and set aside to cool. Once cooled, add the onion and bean sprouts (or cabbage or broccoli slaw), the sesame oil, and second teaspoon of cornstarch. Stir to combine. Break the six eggs into the bowl with the chicken and fold the mixture together until everything is coated in egg, but the egg still looks somewhat un-homogenized.

Heat 2 tablespoons of oil in the same pan you used to cook the chicken. Using a ladle, scoop three large dollops of the egg and chicken mixture into the hot oil, making sure they don't touch (if they do spread, use a wooden spoon to gently nudge errant egg back into place). If your pan isn't large enough for three, making two is fine - you'll just need to make three batches instead of two. Cover pan and cook over medium-high heat until the bottoms of the foo yung patties are nicely browned, about 4 minutes. Flip patties and brown the other side. Once cooked, remove to a paper towel-lined plate to drain off some of the grease. Cover with aluminum foil to keep warm. Repeat with remaining batter.

To make the gravy: In a medium pot or saucepan, heat 1 tablespoon of oil over medium heat. Add 1 tablespoon of flour to make a roux, and cook for 15-20 seconds. Stir in the turmeric, paprika, garlic powder, and onion powder. Let fry for 15 seconds, and whisk in the chicken stock.

Bring the mixture to a boil and add the soy sauce, oyster sauce, sesame oil, and freshly ground white pepper to taste. Mix the cornstarch with the ¼ cup of chicken stock until the cornstarch is completely dissolved, and whisk it a little at a time into the gravy. Add as much of the cornstarch slurry as needed to make the gravy thick enough to coat a spoon. (I used all of it.) Taste for seasoning and add more soy sauce or salt to taste. Turn off the heat and cover pot until ready to serve. (I didn't have to rewarm the gravy, but if you wait to make your foo yung, you might have to.)

To serve: Place a foo yung patty on a plate and douse with gravy. Garnish with sesame seeds and scallions. Serve with plenty of white rice.