If Robert Sietsema can do it, I can, too.

Thankfully, we didn't encounter too many truly awful restaurant dishes. We did have a couple of less-than-good dishes, and even a generally bad overall experience.

Barcocina, in Fells Point, is the recipient of not one but two slots on the Worst Dish list. 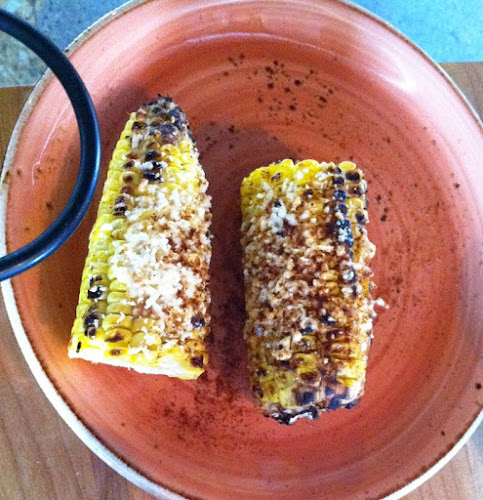 Elotes are a popular street food in Mexico, consisting of grilled corn slathered with mayonnaise and sprinkled with cheese, chiles, and a squeeze of lime. The elotes at Barcocina were allegedly coated with ancho cayenne butter, queso fresco, and lime zest, but tasted of nothing. And, this one medium-small sized ear cost a whopping $6. 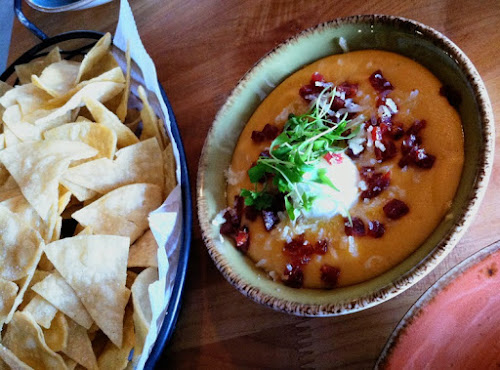 The "Barcocina dip" was also a fail. Billed as "an Oaxaca queso fundido," the oddly fluffy cheese-based dip contained rubbery and flavorless bits of chorizo and an overcooked poached egg that just kinda sat there on top until we chopped it up with a knife. Additionally, the tortilla chips were minuscule, making it rather difficult to scoop up a significant amount of dip. 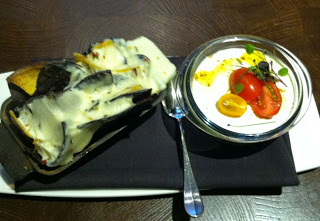 The avocado panna cotta served at David Burke's Fabrick in NY was also a disappointment. I expected something novel, a somewhat firm, gelatinized, mousse perhaps. What I got was a bowl of mediocre guacamole with salsa and sour cream, and a side of overbaked chips that had been glued together with cheese, making them impossible to use as dippers. For $10, I might not have complained, but for $16, I expect a lot more than mediocre. Yes, NY can be expensive, but over the years I've had some really terrific food there for not a lot of money.

Le Garage also served up a couple of real bombs when we visited the restaurant in March. (We did end up going back later in the year, after Andrew Weinzirl took over the kitchen, and had a much better experience.) The dishes in question were appetizers that looked and sounded better than they tasted. 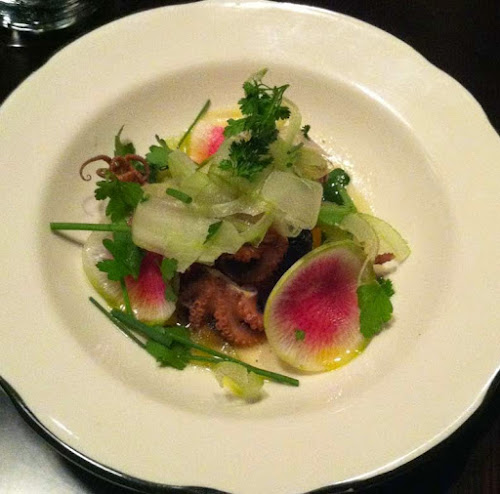 The pretty salad above is actually an octopus "escabeche." Generally, an escabeche involves cooked seafood marinated in an acidic mixture. In this dish, baby octopi were cooked until quite tender, then absolutely overwhelmed with a lime-based concoction. Other elements in the dish--celery shavings watermelon radish, and bizarrely, blackberries and raspberries--offered pretty color and some texture, but not enough flavor to counterbalance the unpleasantly assertive dressing. 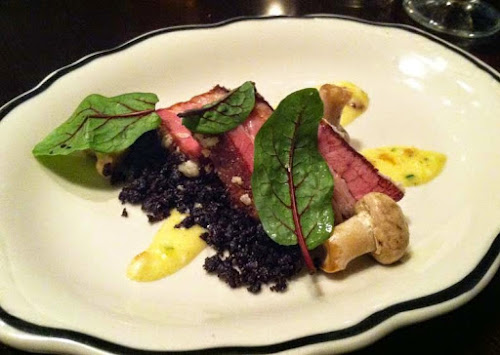 Our other appetizer was better, but not by much. The pork belly was too crisp on the outside, and the black stuff, an "olive candy," supplied salt, but not much else. Pretty, but seriously unbalanced, flavor-wise. It was as if whomever had composed these dishes hadn't bothered to taste them.

Back in February, we visited Frederick for a preview of their Restaurant Week. Mr Minx and I were in different groups that hit different restaurants. Our experiences were largely positive, until we hit the last restaurant on the list. JoJo's Restaurant and Tap House is generally favorably reviewed, so I am willing to chalk up our dismal culinary experience to an aberration. A deconstructed yellowfin tuna "taco" was an insult to tuna. While the fish itself was fine, the accompaniments--tomato tempura, avocado, cilantro lime sour cream, and something billed as "Dorito dust"--just didn't work. The "dust" didn't even taste like Doritos. Another dish, a chicken and spinach burger, was suitable only for someone with a bad headcold. It had no flavor, which a sick person wouldn't notice. Both dishes made us sad.

One last loser: I have to admit that the food at World of Beer, which opened in Towson in September, was pretty decent. However, the noise level was so ridiculously loud, even painful, that our experience there was downright unpleasant. We're not willing to go back.

So, yeah, we could have done much worse. But we're still hoping for fewer bombs in 2016!