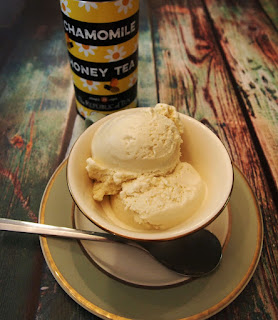 Over the past few years, we've been hearing about the puzzling mass die-off of honey bees. Studies show that 85% of all plants are due to pollinators--like honey bees--so this is an issue that should concern everyone. The Xerces Society for Invertebrate Conservation has instituted special programs to address this issue and have recently entered into a charitable partnership with The Republic of Tea. Their new Biodynamic Chamomile Honey Tea, available exclusively at Whole Foods throughout the Mid-Atlantic, was created to bring attention to this issue. The company was kind enough to send us a can to sample.

The chamomile in this tea, as with other The Republic of Tea chamomile varieties, comes from a small biodynamic farm at the base of the Italian alps, and is highly fragrant. In this particular tea, the flower is infused with a delicate but noticeable honey flavor, and it makes a terrific hot or iced beverage. While sipping it (iced), I thought it would make a lovely ice cream. Indeed, at the Fancy Food Show last summer I had tasted a chamomile tea ice cream that knocked my socks off.

So, after a fruitless search for my own ice cream maker (likely tossed in a fit of pique, as my kitchen is too small to hold such unitasking appliances), I borrowed one from a gracious friend and set to work. Because chamomile is a rather delicate flavor, I thought gelato, made with whole milk rather than tons of heavy cream, would be a better way to show off the flavor of this tea. And it was. The flavor of the chamomile is subtle, but the honey is quite pronounced. There is no vanilla in it at all, but Mr Minx thought there was. It's really very delicious, on its own or scooped over a piece of pound cake. It'd also be dynamite served with a fruit crisp or crumble.

Put the milk and sugar in a medium saucepan over medium-low heat, stirring until the sugar melts. Add the teabags and continue to heat the milk just until tiny bubbles appear around the edges. Remove the pot from the heat and allow the tea to steep for at least one hour. Remove the tea bags from the milk, gently squeezing them dry.

Whisk the egg yolks in a large bowl. Reheat the milk until steaming. Using a ladle, dribble some of the hot milk into the eggs in a thin stream, whisking constantly. After about half the milk has been whisked in, pour the egg and milk mixture back into the pot with the remaining milk. Cook over medium-low heat until thick enough to coat a spoon, whisking all the while.

Strain the custard and stir in the heavy cream. Refrigerate until cold.

Freeze the cold custard in an ice cream maker according to manufacturer's instructions. Gelato has less air than ice cream, so keep it in the machine only until it starts to hold its shape. Once the consistency is like somewhat melted ice cream, scoop it into a covered container and freeze until firm.