The newest addition to the Towson Square complex on Joppa Road at Virginia Ave in Towson (duh) is World of Beer. It is also the noisiest addition, at least it was on the night we were there. It was the beer emporium's first day open and when we arrived at 6pm, it was half-full of loud rowdies. They may well have been perfectly normal people, but the acoustics of the place turned them into shouting idiots. (Or, they could have been shouting idiots to begin with.)

By the time we left, it was 3/4 full, and I was so glad to have had a pair of earplugs in my purse. Sadly, the din, with or without the plugs, prevented any conversation with my spouse, apart from pointing to the various foodstuffs on the table and mouthing, "good?" So you are forewarned that World of Beer is not the place to go for a romantic date, nor if you want to have any conversation at all that doesn't require shouting. For some odd reason, there was a couple there that felt a restaurant with the word BEER in the name was the ideal place to bring their three small children. Fine parenting. If the kids hadn't been getting up and running around, as the children of fine, fine parents are wont to do, it wouldn't have bothered me. It was so damn loud in the place, I couldn't hear their typical childish whining/squeals.

That said, the food was pretty good, and one cannot fault the beer selection. 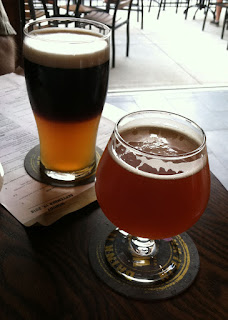 Although there were so many beers, we had difficulty deciding from the lengthy list. Mr Minx eventually decided on the "Batmobile" from the mixed draught section. A combo of Guinness and hefeweizen, it was like a sorta-banana-flavored black and tan. I had a Full Tilt Patterson Pumpkin, mostly because of the name, and also pumpkin. Later, hoping that the more we drank the less we'd be able to hear, we also had a Brooklyn Oktoberfest and an RAR Nanticoke Nectar.

Now, we only went to World of Beer on the opening day because we thought that, as media, we'd get a tour, and perhaps some free food. Otherwise, it's always better to wait a few weeks before trying a place so the kinks have been worked out, both food- and service-wise. An owner and a manager came over separately to shake our hands (one of whom had a nasty, limp, wet fish handshake...shudder), but neither offered anything in the way of telling us about the establishment, about its infusion tower, its partnership with Jail Break Brewing Company and special Monkey Hefeweizen + banana infusion, or the Heavy Seas firkin tapping that occurred earlier in the day. I only know these things because we received a press release a week before the event. Hey, but if an owner didn't care, or think we were important enough to bother to share this information, we shouldn't care either, right? 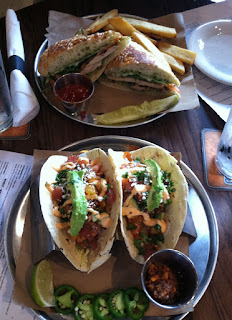 The service, as is usual on a first day of operation, was a bit off. We were approached at various times after entering by employees who welcomed us and told us to sit anywhere. After we picked what we hoped would be a relatively quiet location (near the open front), a few more people came by to say hi (and ask if we had ever been there before, and when we said no, still didn't bother to tell us about the infusion/firkin/etc.) before the person who would be our actual server showed up. She seemed nervous yet eager to please, but spoke too quietly to be heard over the screaming in the background. I originally wanted to order a flight of IPAs, but after realizing there were too many choices coupled with my inability to hear her recommendations, I gave up.

Though I would rather have left, we ordered food. Fortunately, it was generally pretty good. I had two ahi tuna tacos, which were generously-sized and fresh-tasting. Mr Minx ordered a pesto grilled chicken sandwich. It also was huge, filled with nicely moist and juicy chicken breast, and good amounts of pesto and cheese. The steak fries on the side were cooked properly and both dishes were overall pretty well done. 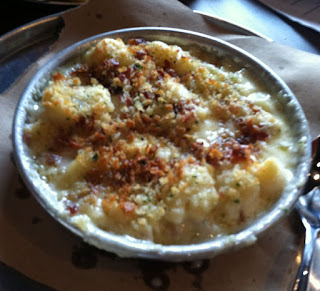 Except we had ordered appetizers, which hadn't arrived yet. After reminding our server, she ran off to set things right. She had recommended their mac and cheese, which is made with spiced pepperjack cheese and topped with crisp bacon and herbed breadcrumbs. The textures were nice --super gooey cheese, crispy crumbs--but apart from being properly salted, the dish was bland. The bacon wasn't even particularly bacon-y.

We also tried the fried pickles. Another huge portion, the pickles featured a melange of shapes and some Peppadew peppers, all lightly battered and fried to a nice crispness. They were well-seasoned and didn't necessarily need a dip in the accompanying sweet-ish dipping sauce (which was maybe a tad too thick). 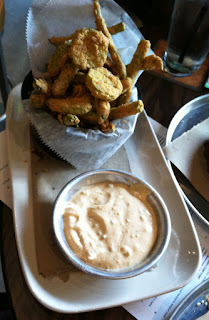 Limp-fish-hand presented us with our bill, saying he had comped the mac and cheese because it had come to the table so late. But we apparently had to pay for the pickles, which were even later. And everything else, too. But the prices are very reasonable for the portion sizes and the bill wasn't that bad. If we hadn't ordered beers (I know, at a place called World of Beer), it would have been downright cheap.

We sucked down our second beers and beat a hasty retreat. I couldn't help but notice that al fresco diners at the restaurant next door had to put up with the noise emanating from World of Beer, which by that point in the evening also included live music. I wonder how it will end up affecting the adjoining businesses.