When the Senator Theatre changed hands a while back, we were promised an expansion and a restaurant. The expansion added three smaller screening rooms without changing the size of the main room, allowing the theatre to show multiple features simultaneously. A welcome addition to our movie-viewing pleasure. But the small space in the front of the building, once a dry cleaner, stayed empty for well over a year. The story was that a burger joint would be opening in that space, which, considering its petite size, was probably all that would fit comfortably. And that the owners would be Canadian. And they would serve poutine. We waited impatiently.

Not that there isn't plenty of terrific pre- and post-movie eats available just around the corner at the Belvedere Square Market, and at Sofi's Crepes across the street. But we wanted gravy smothered fries topped with cheese curds. Who doesn't? (Shaddup, vegans.)

Clark Burger opened in January 2015, with the promised poutine. But we didn't get an opportunity to dine there until the summer, when the big front windows were open up to the fresh air, making the small restaurant seem a little bit bigger. And, well, kinda too warm. (Ugh. Hate summer.) 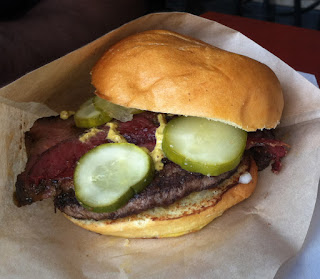 Before a screening of Ant Man, Mr Minx, MinxBro, and I sampled three of their burgers and an order of poutine. My brother had the "Wake N Bacon," topped with a fried egg, Tillamook cheddar, fried onion, srirachi aioli, and of course, bacon. I had the Clark Burger, with cheddar, bacon, lettuce, pickle, and CB sauce, hold the sliced onion. Mr Minx had the Barque Burger (shown above) with Montreal-style smoked brisket, minced onion, dill pickle, and spicy mustard.

The burgers are good. The patties are thin, so you won't find too much pink inside, but the chuck blend they use is flavorful. Even more flavorful is the bacon they top their burgers with - it's lean and thick cut and pretty perfect, at least to my tastes. And no, it's not "Canadian" bacon. One can also concoct one's own combo of burger toppings/sauces. If you choose this option, do make sure you add bacon. 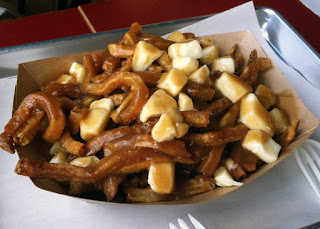 The poutine was delish. The house-made gravy is thick and rich and there were ample cheese curds. They have several versions beyond the classic version we tried, including ones with smoked meat, bacon and fried egg, or chili and bacon. As long as there's bacon, I'm there.

I also enjoyed the smoked meat. I wish they served it as its own sandwich, rather than merely as a burger or poutine topping. It's good, pastrami-esque, and deserves to be showcased.

Burger joints are popping up all over the place these days. I'm glad some of them, like Clark Burger, are worth a visit.