I know a lot of people don't like Bobby Flay for one reason or another, but I'm not one of those people. I've had positive experiences at his restaurants, Gato being the most recent, and enjoy watching him on TV, particularly when he gets his ass beat on Throwdown. For months I looked forward to the opening of Bobby's Burger Palace in Towson, and at long last, that day came in early August.

BBP is of the order-at-the-counter, server-brings-food style of fast casual restaurants. This keeps the prices somewhere between full sit-down (Red Robin) and fast food (Five Guys) service. Burgers hover in the $8-9 range and most have toppings inspired by US regional specialties; the Miami burger, for instance, is styled like a Cubano sandwich, with ham, swiss, pickles, and mustard. There are also plainer versions, like the classic with American cheese, the Bobby Blue with bleu and bacon, and the "Crunchburger,"which includes potato chips.

We settled on the New Mexico and the Philadelphia, with an onion ring/fries combo, paid, got our number, and took a table outside to wait. 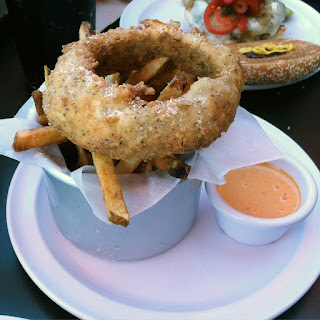 The place wasn't busy, so we got our order pretty quickly. The onion rings and fries came first, accompanied by a spicy "fry sauce" akin to chipotle mayo. The fries were excellent, crispy, skin-on, Boardwalk-style specimens. The onion rings (there were only two, one at the top and another on the very bottom of the container) were large and crusty with batter. A bit too much batter for my tastes - I prefer very little, actually. But they were crunchy and the hot onion didn't slide out of its casing and slap me on the chin, so I have to give it some points for that. 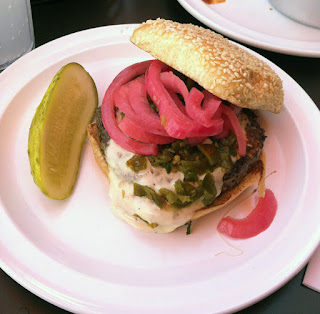 The New Mexico burger had queso, roasted green chiles, and pickled red onions. It didn't taste anything like the green chile cheeseburger that I had in Albuquerque, and that's a good thing. The patty itself was moist and cooked to a perfect medium, the cheese had some staying power and didn't drip out, but the chiles didn't pack the punch I was looking for. The surfeit of onions made up for it. There were so many, I'm sure Scott Conant was being offended somewhere. 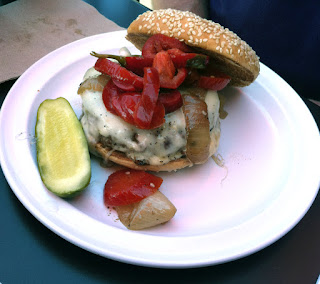 Neal's Philadelphia burger DID have a punch - those hot peppers were indeed HOT. I would have taken at least half off, but my brave husband worked up a sweat as he ate all of them. His burger was also perfectly cooked, with a nice amount of cheese.

One of the best things about the burgers at BBP are the squishy sesame seed buns. Honestly, why do so many places insist on brioche buns? Fancy isn't better. Squishy rules.

We had fountain sodas with our meal (Fresca!), but milkshakes and malteds are available in 10 flavors, including pistachio, which I might have to try at some point. There are also three flavors of booze-spiked shakes (also on the "to try" list), plus beers, a lone margarita, and BBP red or white wine. The wine is definitely not on my "to try" list. Sorry, Bobby. The food menu also has a couple of grilled cheese sandwiches and salads, but it's a burger palace, so eat burgers. They were pretty good, so we'll be back.