When planning a trip to New York with Mr Minx, I determined that we had to dine at Bobby Flay's newest restaurant, Gato--especially after reading GQ critic Alan Richman's glowing review.


The Greenwich Village restaurant is dark. It's a high-ceilinged space with with lots of brick and dark varnished wood, so my photos are less than perfect. (I had to Photoshop the hell out of them to get the colors to show.) No matter...the food was pretty close to perfection, so even if we didn't get to eat with our eyes so much, our palates were quite happy.


We ordered a lot of food, starting with a trio of small plates from the "bar" section of the menu: eleven layer potato with caramelized shallots and fried sage; wild striped bass salsa torres; pequillo filled with raw tuna, saffron sauce. Each dish was bursting with flavor and we were sad that the portions were small. Those tuna stuffed peppers would make a fab party snack, and the bass would be lovely in an entree-sized portion. And how can one go wrong with a stack of tender potato slices touched with the sweetness of shallot? 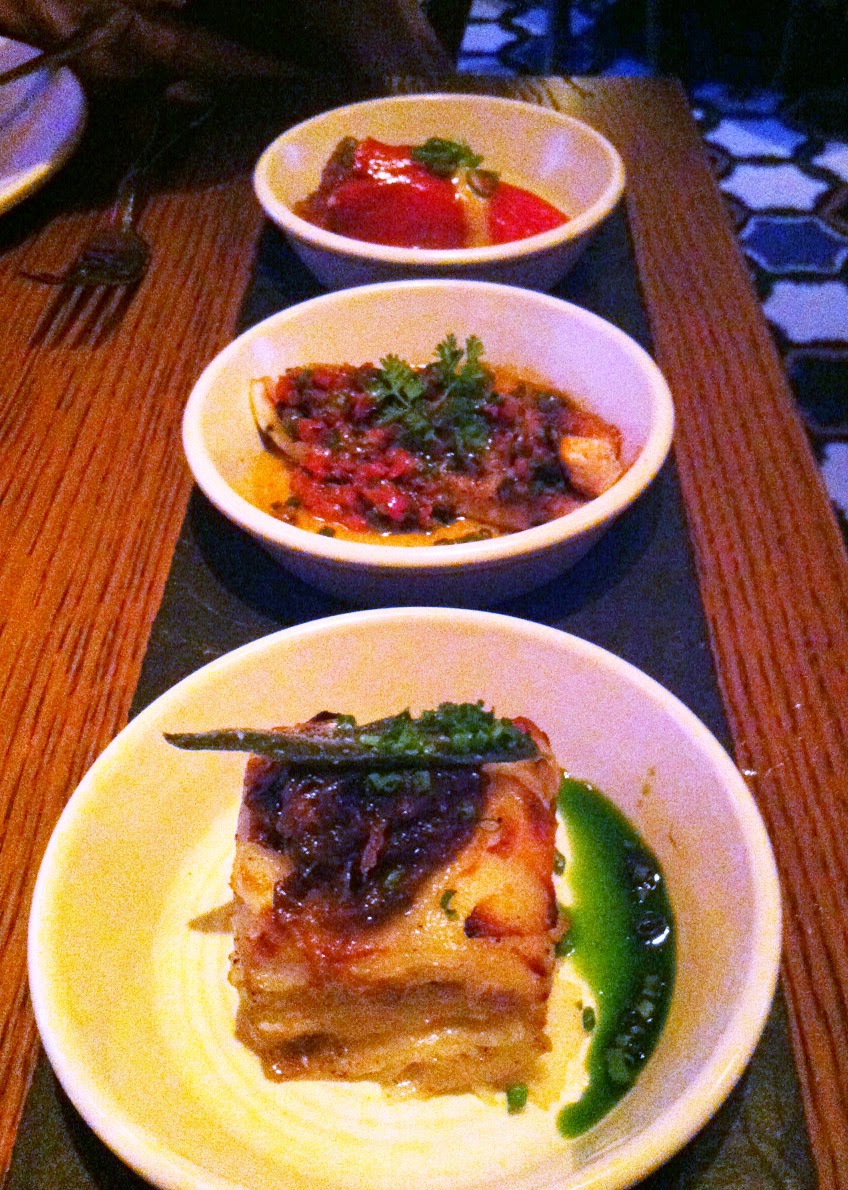 I'm all about carrots, so when I saw the charred carrots with parsnip chips, harissa, mint, and yogurt, we had to get them. The carrots were indeed charred to blackness yet were still crisp-tender on the inside. The charcoal-y coating gave the carrots an interesting flavor that bordered on the medicinal. In addition to the carrots and crunchy parsnip chips, there were tender sweet chunks of beet, making this dish a showcase of the range of flavors and textures found in humble root vegetables. 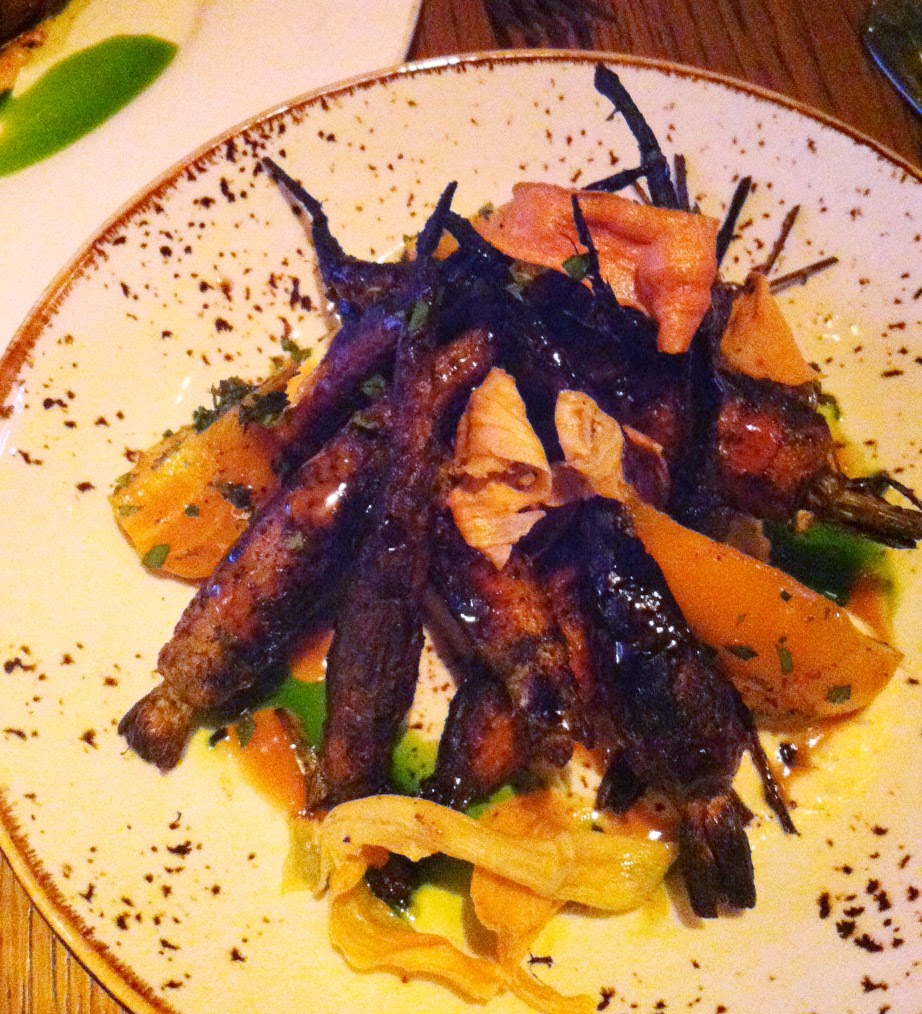 We had just seen Flay make octopus in an episode of Iron Chef, so ordering his roasted octopus with sour orange, bacon, and oregano was a must. I'd never had octopus that was so tender before. Honestly, it could be cut with a fork. And the bacon lardons and orange sauce added just the right amount of salty and tangy flavors. We definitely could have done with several more tentacles.... 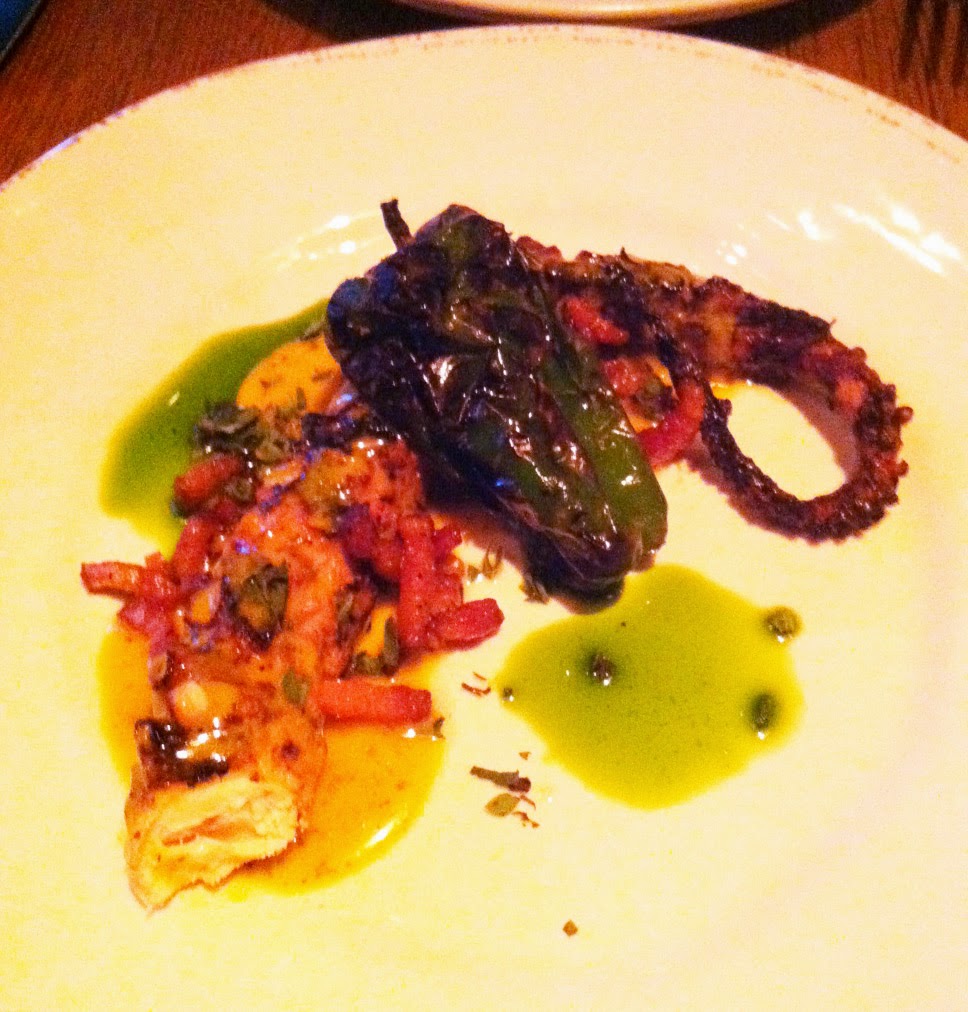 Instead, we moved on to entrees. Mr Minx had the porterhouse pork chop topped with romesco over polenta. The huge chop was cooked to medium, and was juicy and well-seasoned. The polenta was smooth and creamy but not overly rich. And the chunky romesco was good enough to eat directly from the bowl with a spoon. Had they offered us a bowl of it and a spoon.... 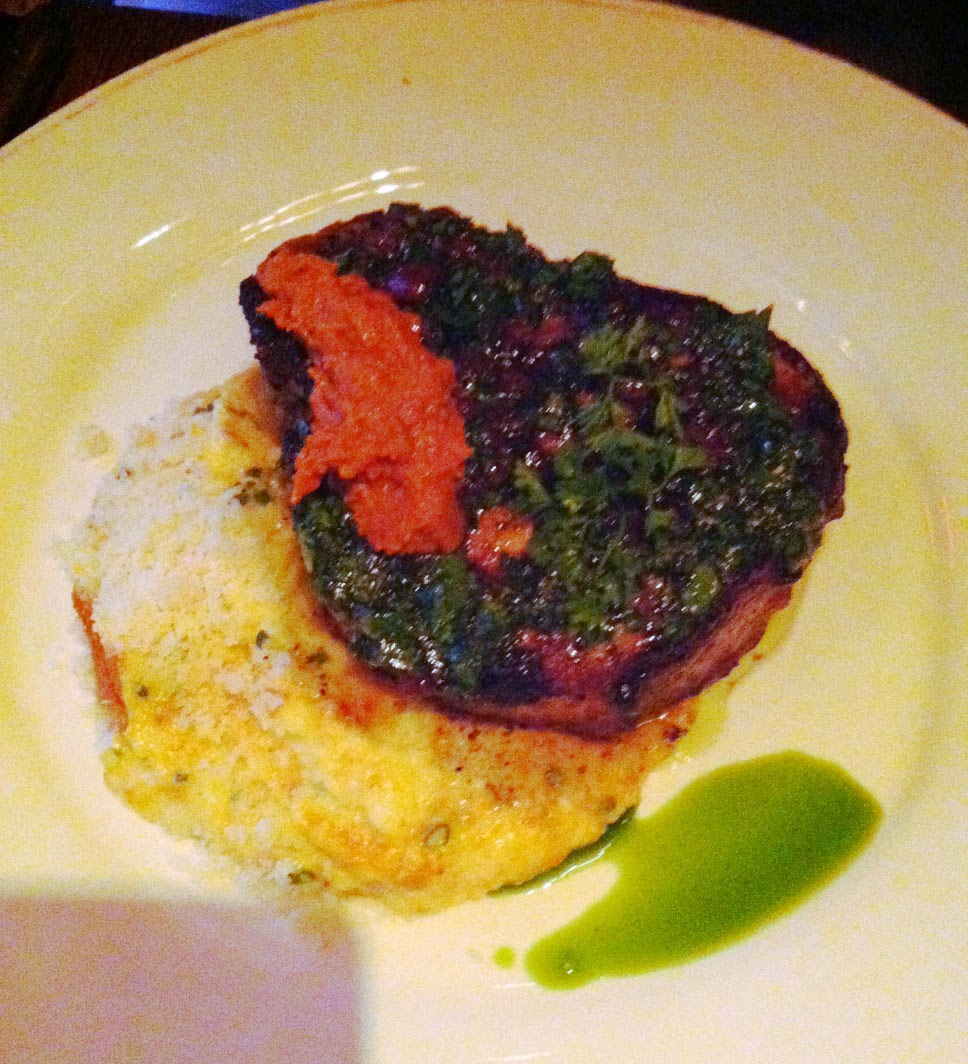 Knowing that we were slated to eat an all-fish luncheon at Le Bernardin the next afternoon, I passed over the menu's fish selections (halibut, orata, fettucine with prawns) and ordered something completely uncharacteristic for me: the rabbit. I haven't much liked rabbit in the past, finding its occasional gaminess unpleasant. But this rabbit was wonderful. A full leg portion and the tiny loin were served with a pile of fregula (a Sardinian pasta similar to Israeli couscous), fresh peas, chanterelle mushrooms, and a carrot hot sauce. The meat was tender and chicken-like without actually tasting like chicken, and I loved the textures and flavors of the fregula. I liked Mr Minx's chop, too, and really can't say which I enjoyed more. 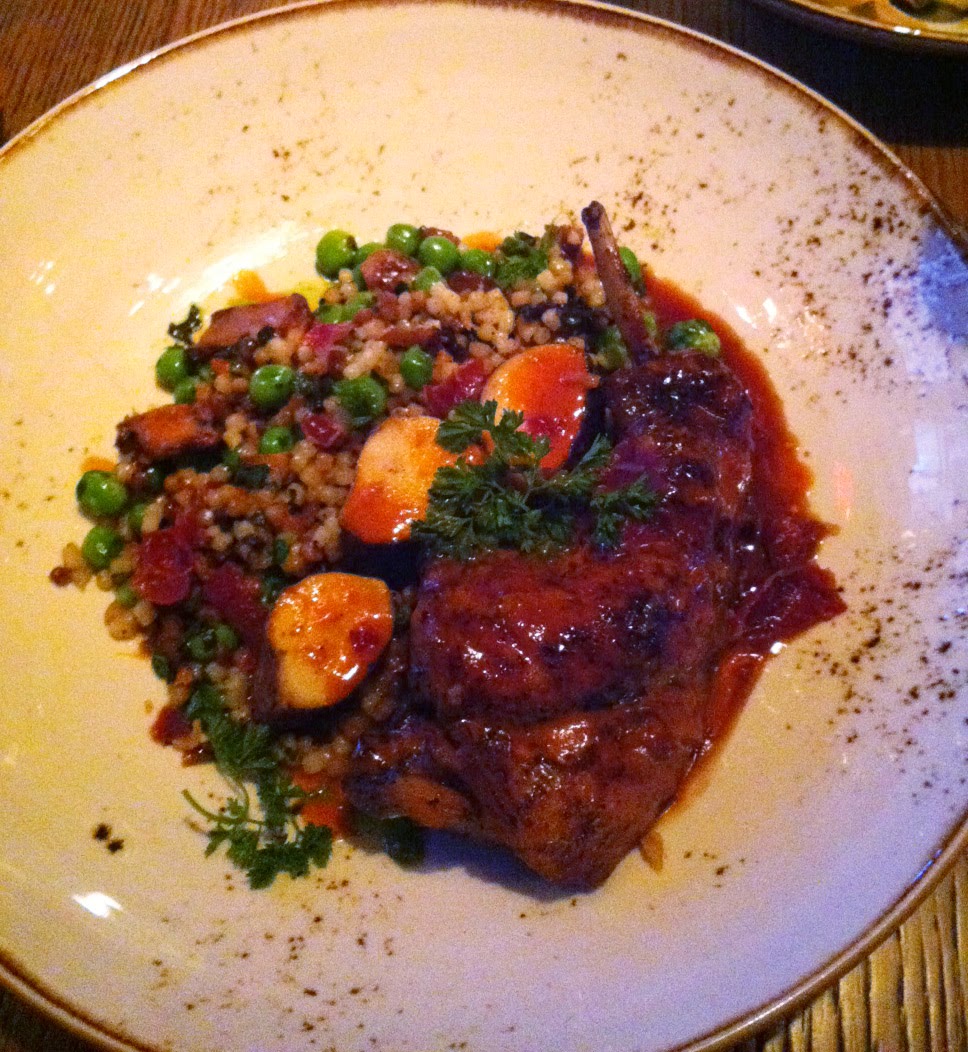 At this point, we were stuffed, but ordered a dessert to share. The Meyer lemon tart must have been filled to order, as the crust was crisp all the way through and the tangy filling with its characteristic lemon/tangerine flavor was still slightly warm and a bit loose-textured, like freshly made lemon curd. We also loved the whipped cream, which was heavily flavored with pistachio and topped with a crumbled pistachio brittle. 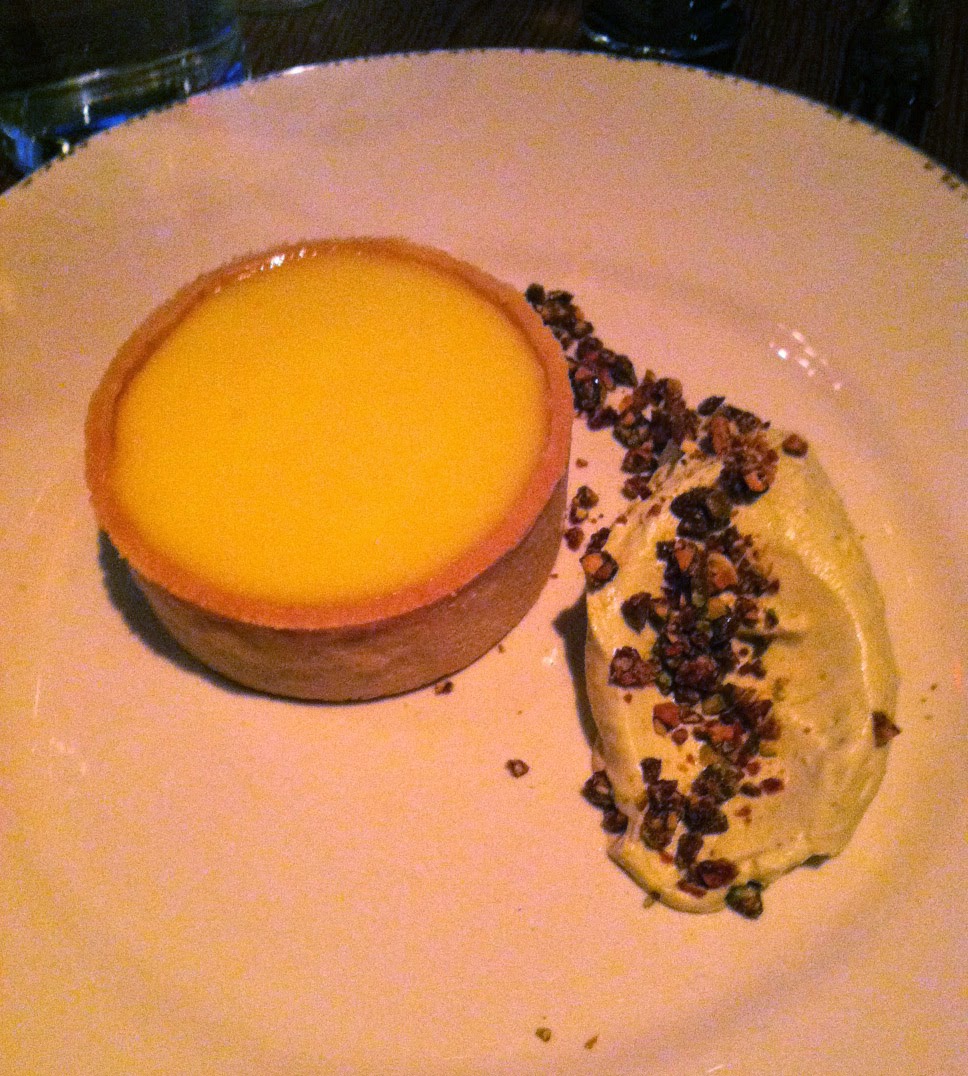 As if that wasn't enough, we were brought a complimentary plate of wafer-thin biscotti and glasses of cream sherry. I had overheard our server tell the couple at the table next to ours that their sherry was to celebrate the male diner's birthday. We weren't celebrating anything, so I think we got the sherry because we're so darn cute. :) 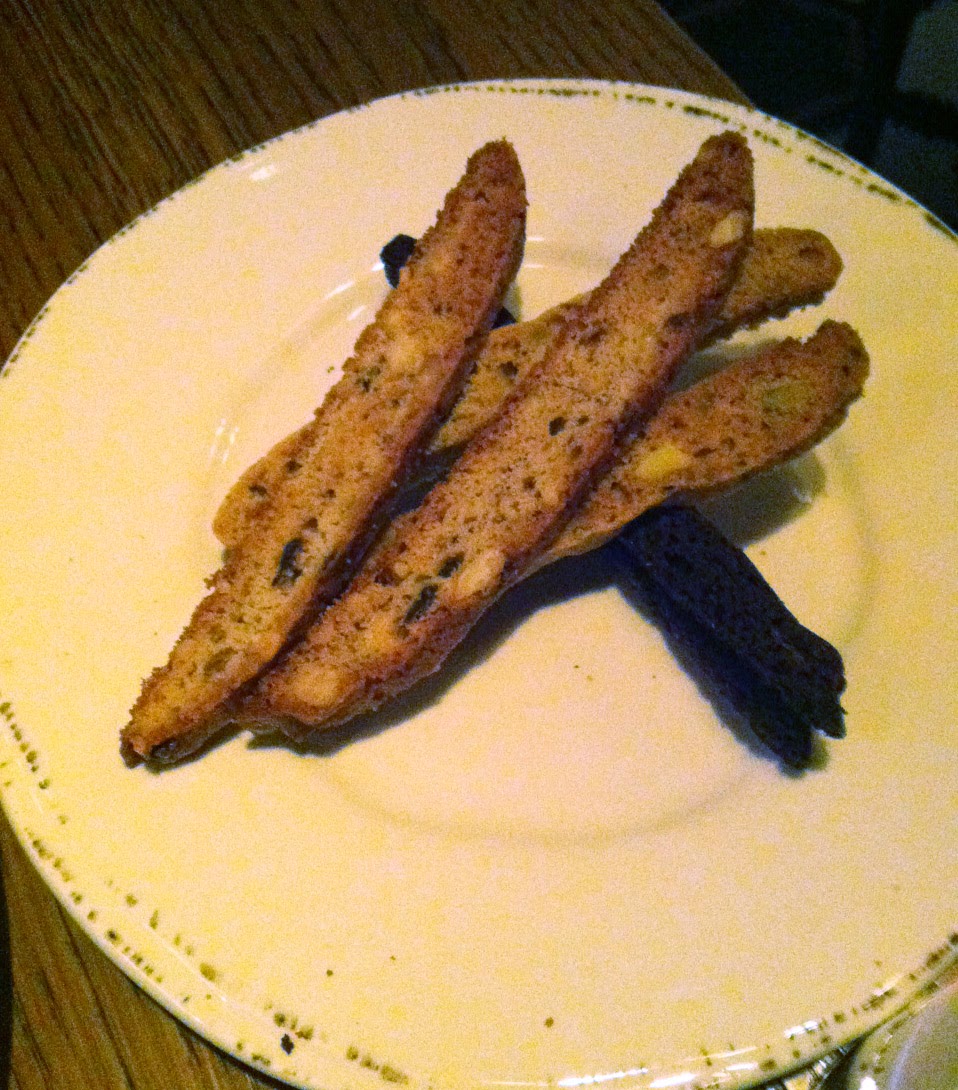 Overall, an excellent meal. Everything was big and bold--no wimpy flavors on these plates! Proteins were cooked and seasoned perfectly, as were all accompaniments. I know some people don't care for Bobby Flay, but the man can cook. And as we saw him there in the kitchen, on the line, actually cooking, we know that he had to have personally touched at least a couple of our dishes.

Here's to many successful years for Gato.