Back in 2008, in my write-up of a meal at Harold Dieterle's first restaurant, Perilla, I said, "I'll be back." Unlike Arnold Schwartzenegger, I lied about that. I never did go back to Perilla, but not because I didn't like the place. Au contraire--I enjoyed the food there very much. But there are so many terrific restaurants in Manhattan, and I hate not giving all of the others a go. Dieterle himself has two more restaurants, Kin Shop and The Marrow, and on our most recent visit to New York, Mr Minx and I gave the former a try.

Billed as "contemporary Thai," Kin Shop's menu is full of items familiar to lovers of Thai food: laab; tom kha; massaman; chu chee. But that laab is made with duck and is so spicy that it merits 4 asterisks. The tom kha soup has features uncharacteristic snake beans and crispy taro, the massaman is made with goat, purple yams, and mustard greens, and the chu chee involves monkfish and Meyer lemon. And it all sounded so good, we weren't quite sure what to order.

The dish that caught my eye first was a salad of fried pork and oysters with celery, peanuts, mint, and a chili-lime vinaigrette. It was a pretty generous portion, with three large, crisply-battered, tender oysters and three slabs of battered and fried pork, topped with shaved celery, pickled red onion, a ton of green herbs, and a smattering of peanuts. What's the Thai word for delicious? Aroy mak mak! (Very very delicious.) 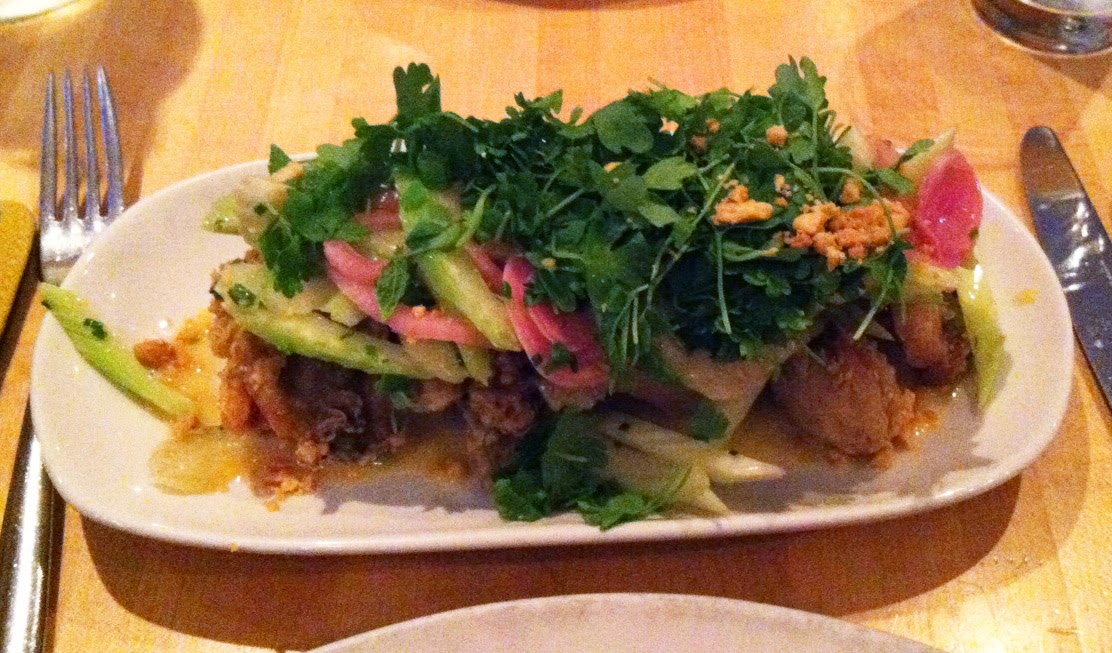 Mr Minx chose the papaya and gem lettuce salad for his starter. Unlike typical Thai papaya salads that are made with unripe green papaya, this one had chunks of ripe fruit, along with plenty of candied cashews and pieces of asian pear, all coated in a bright yellow ginger-yogurt dressing. Apart from finding the yogurt-y-ness of the yogurt a tad disconcerting, I enjoyed the mild sweetness and crunch. 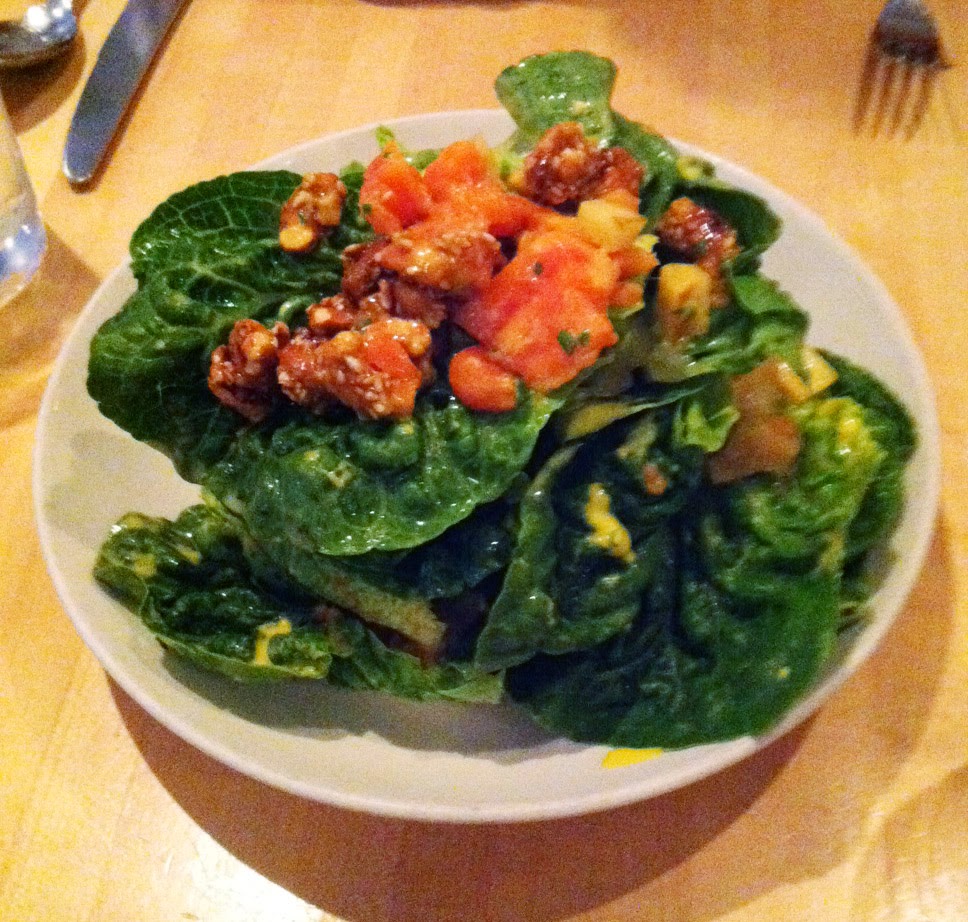 Having had a large lunch, I wasn't sure if I was hungry enough to eat an entree. Having also had a very expensive lunch, I was also feeling on the cheap side, and decided that the $12 preserved Siamese watercress fried rice with a poached egg and sriracha would be perfect. And it was. I had no problem scarfing down the rather large pile of greaseless rice ornamented with lightly pickled greens. I haven't had fried rice this good since I was a kid, when Dad and I would buy a quart of pork fried rice from Chung's on Cold Spring Lane, douse it in duck sauce, and eat it in the car with plastic forks. Kin Shop's rice had the sweetness built in, and was also savory, salty, and spicy to boot. Really stellar stuff. 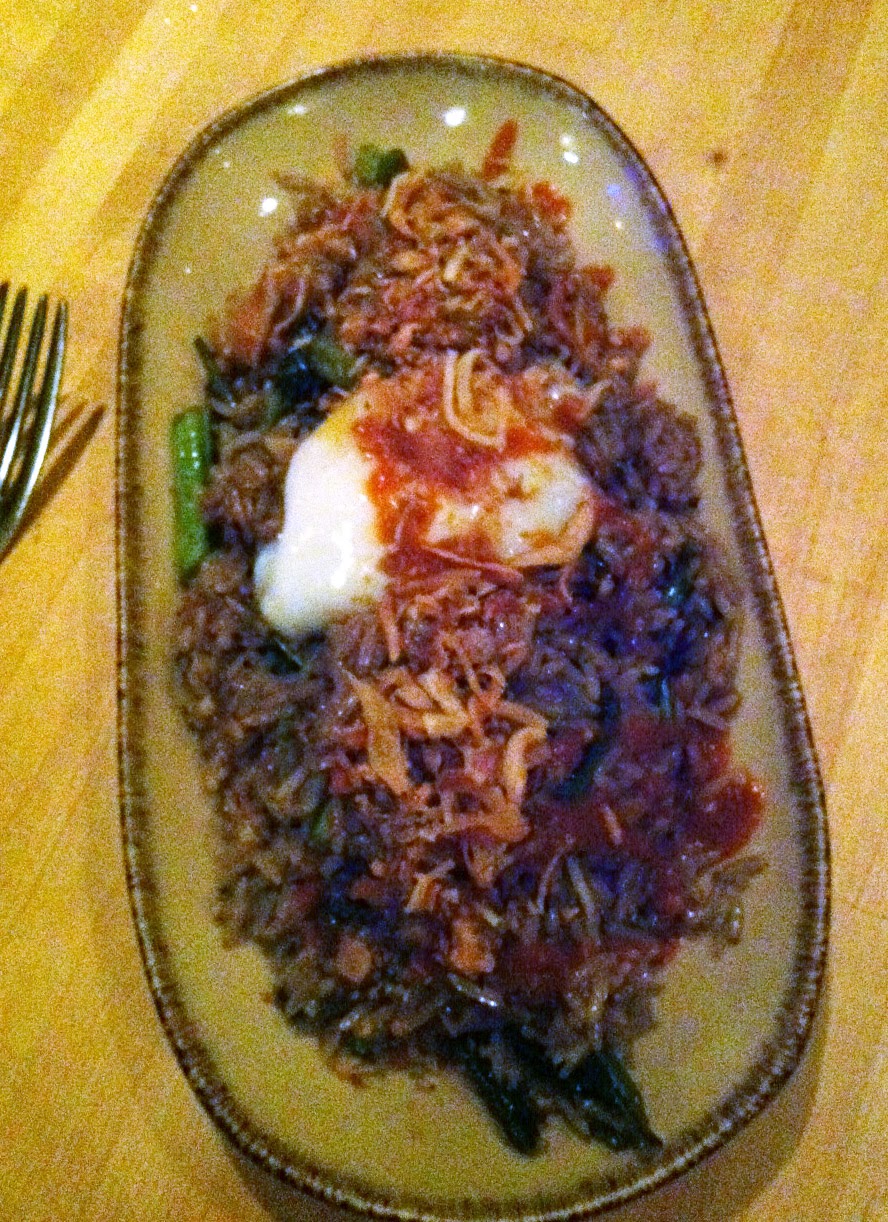 Also quite fine was Mr Minx's stew of pork cheeks with tiny sugar snap peas, chiles, and what appeared to be wood ear mushrooms (those snappy, flat, black mushrooms commonly found in Chinese mu shu dishes). The pork was incredibly tender, and Mr Minx was able to cross that particular protein off his "must try" list. While I did love my rice, it wasn't hard for me to share if I got to snarfle up some of that delicious pork concoction. 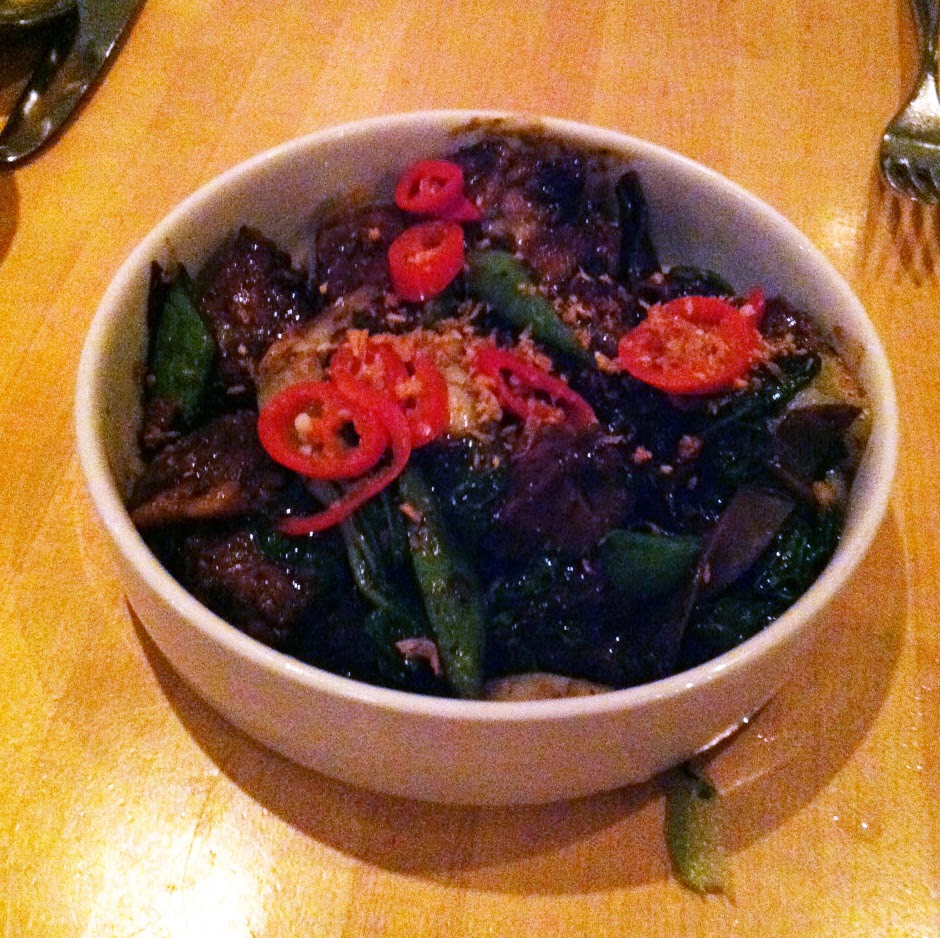 One thing we noticed was that people around us were ordering lots of food--salads and noodle dishes and curries. And had we been hungrier, we certainly would have wanted to try the soup dumplings, the lobster summer roll, the peanut noodles, and maybe even that incendiary duck laab.

Baltimore needs a contemporary Thai restaurant like this, someplace that's not afraid to experiment with Thai flavors combined with non-traditional ingredients. I really want to say, "I'll be back," and mean it this time, but I have a feeling that the next Dieterle restaurant I visit will have to be the Marrow. Only then I can go back to revisit Kin Shop, and yes, Perilla. Unless of course Dieterle opens a fourth restaurant....