In my youth, Fazzini's was a mythical restaurant. I would hear their radio ads on the old WHFS and cringe at the bad jokes, but the food sounded like heaven to a pasta maniac like me. Years later, when I started dating the Minx, her brother would talk about how great Fazzini's meatball pizza was and his alarming weight gain was a testament to how addictive their food was. Still, Cockeysville was a little out of my usual stomping grounds and I never went. It wasn't until years later that the Minx and I actually ate at Fazzini's and the food was...okay. Maybe we should've ordered the meatball pizza.

Recently, Fazzini's Italian Kitchen ditched their old location and their old-school menu and moved into new digs on York Road. They also brought in a new chef with a more refined menu to create Fazzini's Taverna, so it seemed only fitting that the Minx and I would bring along her brother and father to check out their updated style of cuisine.

The new building used to house Piv's Pub and Fazzini's chose to keep the dark-wood decor pretty much the same, adding some nicer tables and banquettes to smarten up the look. The waitstaff is also more formal and were quite attentive if perhaps a bit frazzled during our time there. I would chalk that up to working out the kinks while dealing with crowds who were equally curious to see the new place.

Fazzini's has jumped on the small plates bandwagon with a menu of snacks, hot appetizers, and cold appetizers to compliment the pizzas, pasta, and entrees. We chose to order a few appetizers and two pizzas for the table. Our first dish was calamari and hot pepper misto. We were disappointed that the ratio of calamari to peppers favored the peppers, which were pretty darn hot. I have to think that many old Fazzini's customers would be put off by such a spicy dish. The calamari, while tender, were sliced into thick rings that were too large (some were undercooked) and the coating was quite pale. Smaller pieces may have fried up faster and provided crispier bites. 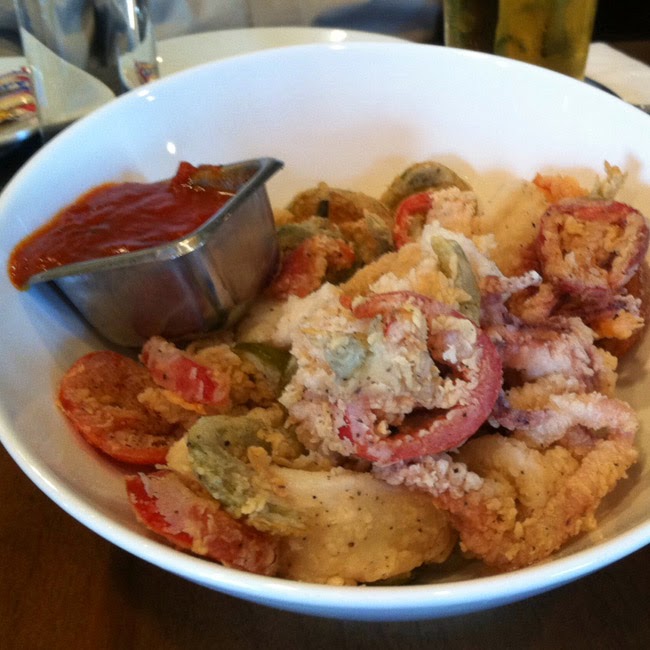 Albondigas con almendras, or pork and beef meatballs, were good if maybe a bit too charred on the outside. I like a good sear on my meatball, but these were black on the outside. I liked the fact that they used toasted almonds in the tomato and red wine sauce, however. It added a surprising crunch to what would normally be just soft meatballs in sauce. 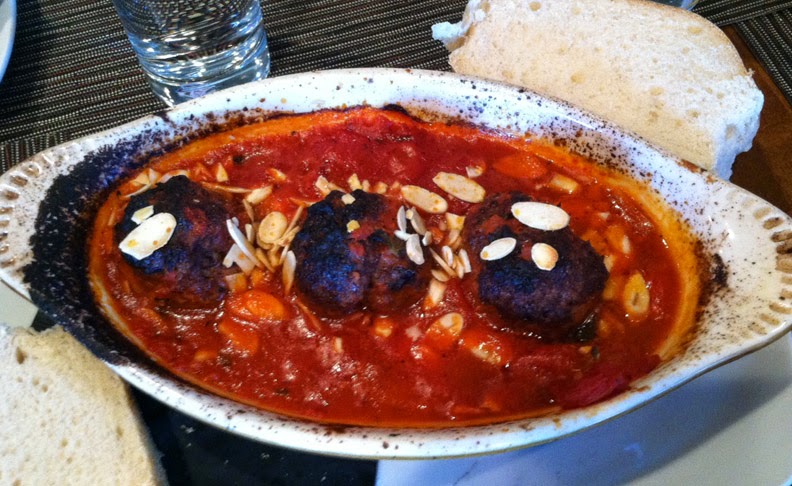 The prawns in garlic-parsley butter was my favorite of the appetizers even if I only got one since there were only four prawns in the dish. Fazzini's obviously has a sizzling grill because the prawns had a powerful grill flavor and, of course, you can't go wrong with garlic and butter, although Minxy would have liked more garlic. Some toasted bread was provided to sop up the excess butter. We also ordered pappas bravas or wood fired chunks of potato covered in a smoked paprika aioli. The potatoes were crisp and the aioli was thick and eggy like crab imperial without the crab. And without the smoked paprika. 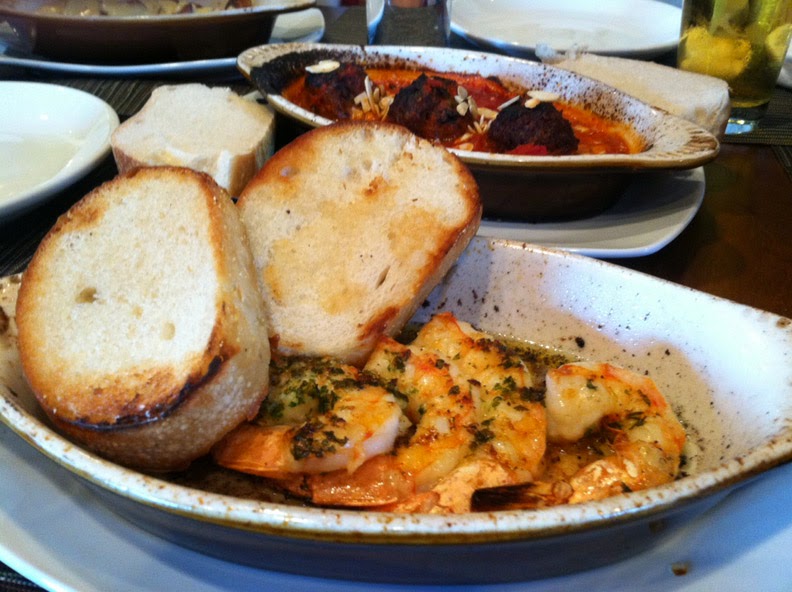 The waiter thoughtfully brought the pizzas out one at a time so we could enjoy each one without having to wrestle two large platters on our table. The first, a sausage and pepperoni pizza, had the familiar flavors you would expect from this traditional pie. I prefer crumbled sausage over the sausage slices on this pizza, but there was plenty of cheese and just the right amount of sauce to create the appropriate balance of flavors. As for the crust, it was thicker than a New York style pizza, but not soft like a fresh dough pizza either. In fact, it's possible the dough was either overworked or not allowed to rise long enough because it was entirely too tough. Good thing the pizzas are small because we suspect that if anyone tried to eat a leftover slice the next day, it would become impossibly dense. 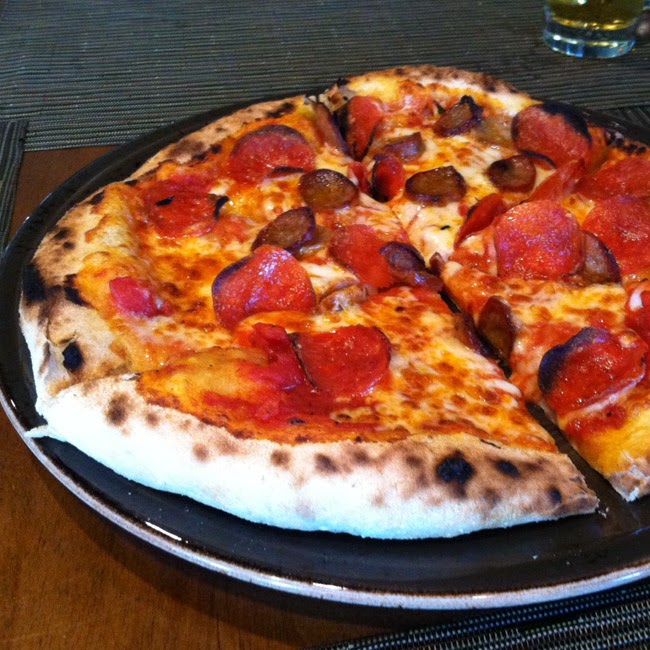 We were particularly interested in trying the Anytime Breakfast pizza. Sausage, bacon, potato, and a runny egg layered on top of mozzarella is supposed to make you think of a hearty breakfast in each bite. Trouble was, it didn't make me think of breakfast at all. Perhaps it was the mozzarella or whatever sauce they may have put on underneath, but it just seemed bland and greasy. Also, with only one slimy egg in the middle, the flavor of egg was mostly missing. 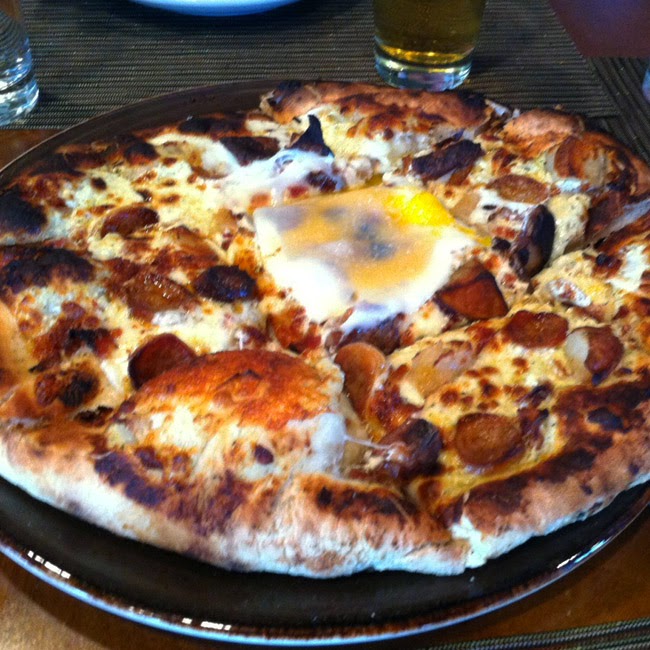 I left Fazzin's Taverna feeling not only disappointed but concerned. Clearly, they must have known that such a radical change in menu would lose them a fair chunk of their regular clientele, and while I applaud the bold move from traditional red sauce Italian joint to upscale Mediterranean bistro, there were too many errors in execution to deem any of the dishes really exceptional. This is particularly critical when a restaurant is charging upscale prices. I hope that some of the cooking miscues will be worked out over time so that Fazzini's can firmly establish itself in its new incarnation. Otherwise, they may become stuck as neither pesce nor pollo and never find an audience.