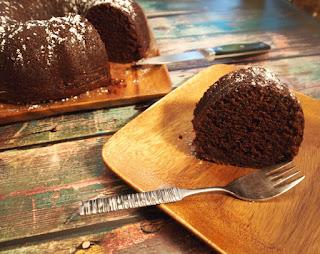 The last time I was in my brother's apartment, he plied me with a package of bacon and a big container of sour cream. The bacon would come in handy later in the year when I made a big batch of bacon jam for holiday gift giving, so that went directly in the freezer. The sour cream, however, needed to be used much sooner. The sell by date was nigh; by the time I had the opportunity to open the container, it had passed. But only by one day, so the stuff was still plenty fine. (I'm still alive, aren't I?)

This cake is very moist and tender. You could glaze it, I suppose, but powdered sugar is really all it needs. Oh, and maybe a scoop of your favorite ice cream or a cold glass of milk or cup of coffee.

Pour batter into the bundt pan and bake for 40-45 minutes, or until a toothpick inserted in the center comes out clean. Place pan on a wire rack. After 20 minutes or so, invert the cake onto the rack to cool completely. 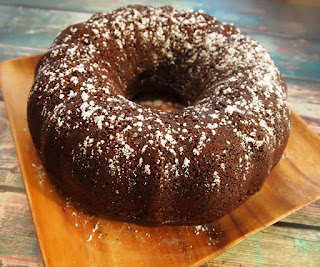