I've been to Alewife more than a couple times in the past few years, yet have never written about it. Full disclosure: Chad Wells, the chef at Alewife, has helped us out with more than a few recipes for our books, as well as information on invasive species in the Chesapeake for the upcoming one. He's a smart guy with a lot of passion for fishing and food, and is a fine chef to boot. And...he makes one of the best crab cakes in town--no lie--with actual local blue crab (Alewife is True Blue certified).

I work about two blocks from Alewife, and I love craft beer, yet I manage to avoid the place at lunchtime. (It helps that they're not open for lunch most of the week.) This is not to say that I haven't occasionally had a liquid lunch, but most often I go to Alewife to chat with Chad. Recently, however, I've found occasion to have dinner there. Twice in a month. Alewife just happens to be the most interesting restaurant within short walking distance of Oriole Park at Camden Yards, a great place to have a beer or three and maybe a burger or something more exotic before taking in a game.

On my most recent trip, Mr Minx was my dining companion. He had never been and was eager to try a few beers and maybe the wild boar sliders or blue catfish tacos. Unfortunately for us, the restaurant had been hit by packs of rabid eaters and drinkers during the week, sucking most of the taps dry and devouring many menu items. "I'll have the [insert brewery name here] IPA, and she'll have the [insert other brewery name here] porter," was met by, "oh, sorry, we're out of that," more than once until I asked our waiter to just tell us what of the rather voluminous list of brews was still available. 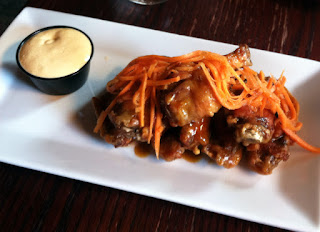 I'd been craving wings and liked the idea of ones bathed in a spicy Thai-style sauce. These were good--well-cooked, not overly saucy or messy, and not overly spicy. Marinated carrots were a nice twist on the usual celery sticks, and a cilantro Sriracha sauce stood in for bleu cheese. I would have loved a handful of finely chopped peanuts on top, but  maybe the dude with the peanut allergy at the next table wouldn't have appreciated it. 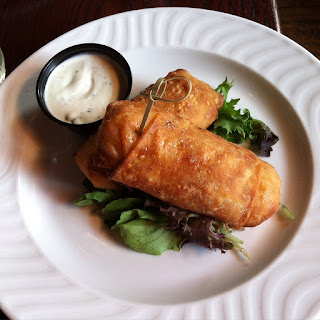 Chad told us the eggrolls that day were filled with his mac and cheese, Buffalo-style. Sold! They were great--perfectly fried, with a filling of Chad's super creamy Palmyra cheddar, Gruyere, and Grana Padano-sauced rotelli pasta and little nuggets of hot-sauced chicken. They reminded me a bit of my friend Don's glorious deep-fried mac and cheese. Loved the Parm-tinged dipping sauce on the side, though the creamy eggrolls didn't really need it. 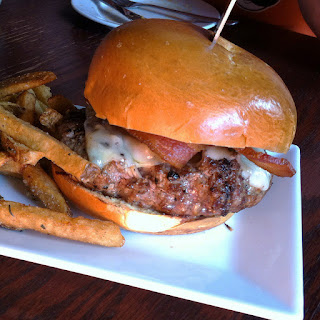 The Smoke Burger, an 11-ounce patty of local Roseda Beef topped with smoky stuff like applewood bacon, smoked Gouda, and chipotle aioli, plus Gruyere and caramelized onions, was perfect for sharing. It deserves every accolade it's received as the Best Burger in Baltimore. The meat was tender and juicy, perfectly medium, with just enough toppings. Even the brioche bun, which we usually hate because they always fall apart, worked perfectly. The accompanying duck fat fries dusted with rosemary were crisp and lovely. A great burger and fries combo. 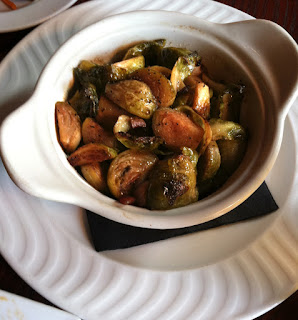 We also had the tasty Brussels sprouts, simply pan-roasted with some bacon lardons and balsamic vinegar. 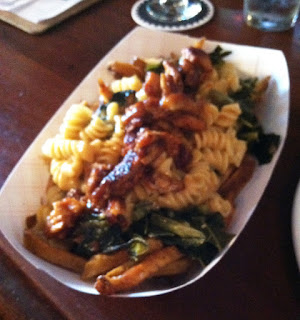 A few weeks earlier, my brother and I had pre-game nibbles that included the pork belly fries. Like the mac-and-cheese stuffed eggrolls, this is a perfect dish for someone planning to have more than a few drinks. The restaurant's customary duckfat fries are topped with mac-and-cheese, braised bbq pork belly, and pickled collard greens to cut the richness. It's a somewhat insane combination, but one that works very well, even for folks who aren't hitting the sauce. 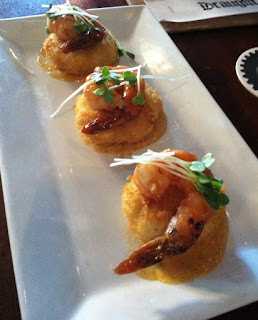 We had the shrimp and grits (which is more like an app than an entree). Loved that the grits came in the form of crispy fried cakes. Also had the snakehead cakes, kinda like an invasive species version of Baltimore's famous coddie, served with a corn and bacon salad and dill avocado puree. (Somehow I deleted that photo. I'm sure it was blurry.) All delicious. (And if you want the recipe for the snakehead cakes, it'll be in our next book!)

All this rambling to say...wish it hadn't taken us so long to sit down and enjoy a full dinner at Alewife. Food's great, beer selection (when it hasn't been decimated) is really nice, and Chad's great, too. Go check it out, even if you have to buy Os tickets or see something at the Hippodrome (across the street) or Everyman (next door) theaters to give you an excuse.