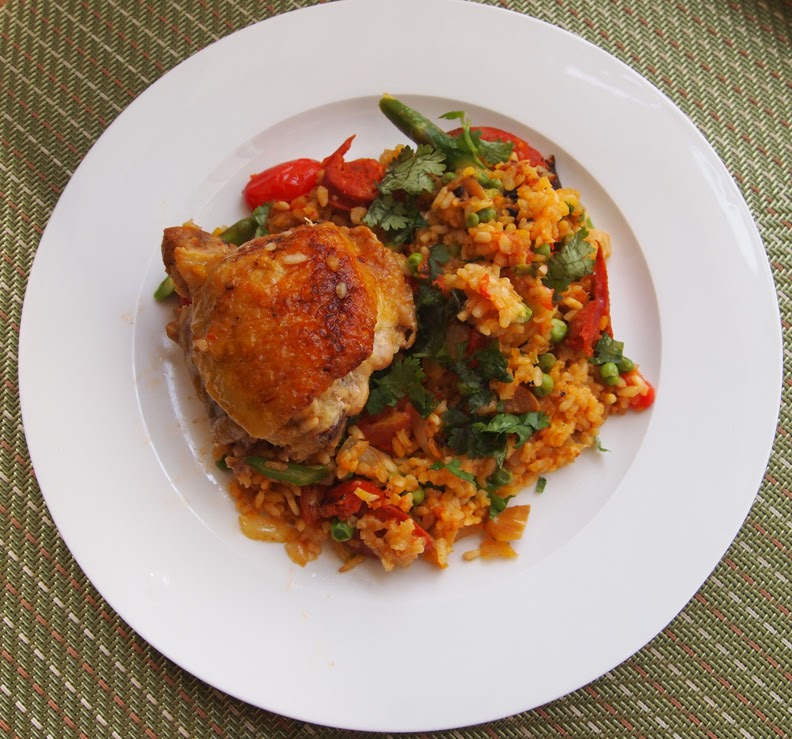 Paella seems like such a luxurious restaurant dish, doesn't it? Usually chock full of shellfish and meats and scented with saffron, this Spanish one-pot meal may be daunting to the home cook. But it really needn't be.

Making paella at home doesn't require any special culinary prowess. There are no fancy techniques involved. And while having a paella pan is a nice touch, you can make it in any large, shallow, flat-bottomed pan that's designed to be used on top of the stove. There are also some standard recipes for paella. The most famous, paella a la Valenciana, calls for chicken, chorizo, and several types of shellfish. But who is going to stop you from using completely different proteins? There is no Paella Police, and you won't get into any trouble if you don't feel like dealing with fresh, in-shell, shellfish, or if you'd prefer to use pork instead of chicken, or kielbasa instead of chorizo. Because it's going to be tasty anyway.

Now, I'm not advocating that you go crazy and stud your paella with chunks of tofu or tempeh or tuna (but hey, you can if you want--I won't be eating it). You also aren't stuck with using particular vegetables. Onion and garlic, of course, are the basis of any tasty savory dish, so they shouldn't be omitted, but you can use green beans, sugar snaps, or edamame in place of the peas, or add something else green, like the asparagus I put in mine. Artichoke hearts are great too, and fennel, but make sure to add these during the initial cooking.

As for seasoning, saffron is traditional, but if you don't have/can't afford saffron, don't worry about it (although it is delicious). If you don't have smoked paprika, use regular paprika. Stir in a handful of chopped parsley or cilantro at the end, even basil, if you have it. I used a bit of chipotle, too, because I wanted a little heat in the dish.

The only ingredient that you should be mindful of is the rice; it should be short grain. While special paella rice is hard to find, pretty much all supermarkets should have arborio (risotto) rice. 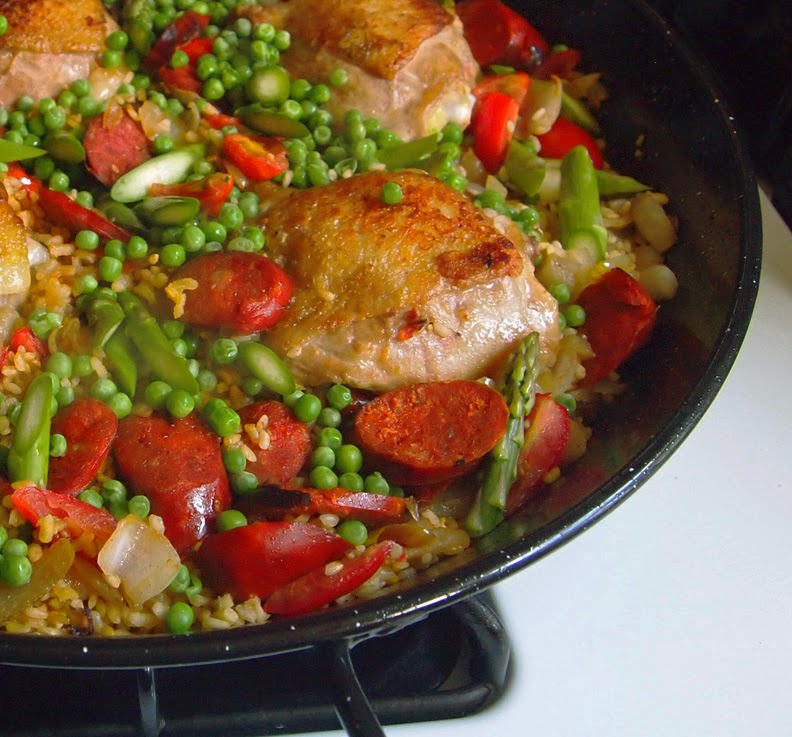 No matter what combination of protein and veg you use, follow these simple instructions and you'll have something delicious on your hands.

1. Brown the meat and remove from pan
2. Cook onions in fat rendered from meat
3. Add rice and saute for a few minutes
4. Add non-green veg, seasonings, and stock and return meat to pan
5. When rice is done, add green veg
6. Eat!

Heat up 17" paella pan or other very large flat-bottomed pan designed to be used on a stove top. If all you have is a 12" skillet, then use the smaller quantities of ingredients. Put a small splash of oil to the pan, just enough to keep the chicken skin from sticking as soon as it hits the pan. Add the chicken thighs, skin side down, and cook over medium heat until well-browned. Turn and brown on other side. While chicken is cooking, add the whole chorizo and turn them occasionally. When chicken is browned, remove all meat from the pan and set aside.

Wipe out some of the chicken fat from the pan, leaving 2 tablespoons or so. Add the onion and cook until softened and slightly brown, 6-8 minutes. Add the rice and stir well to coat with the fat. Cook for a few minutes, until rice is starting to get toasty, then add the tomatoes and garlic. Add the saffron, paprika, optional chipotle, and salt. Stir well to combine. Pour in the chicken stock, then put the chicken back in, skin side up. Slice the chorizo and scatter around the chicken. 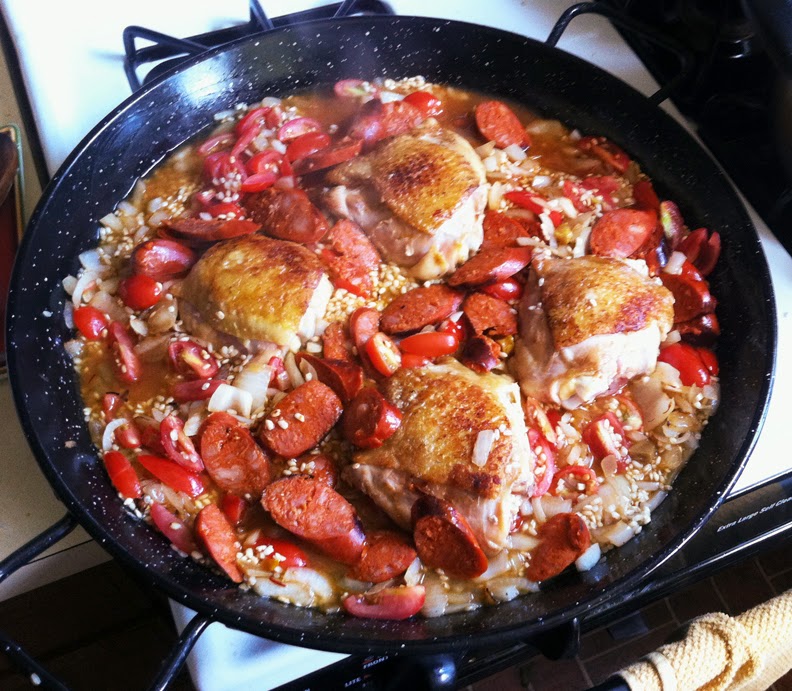 If you're using a large paella pan that fits over two burners, put them both on low heat. Cook until broth has evaporated and rice is no longer crunchy, 20 minutes or so. If the broth is gone and the rice is still crunchy, add more broth. Don't stir the rice during this time; you want some of it to stick and brown on the bottom of the pan. This crunchy layer is called the socarrat and some think it's the tastiest part of a paella. Don't worry if yours doesn't form a socarrat--it will still be delicious.

When the rice is done, add the peas and tuck the asparagus down into the rice. Cook an additional 5-10 minutes, to cook the asparagus (and give the socarrat another chance to form).

It's important that the heat be on low or medium low - you don't want the rice to burn. 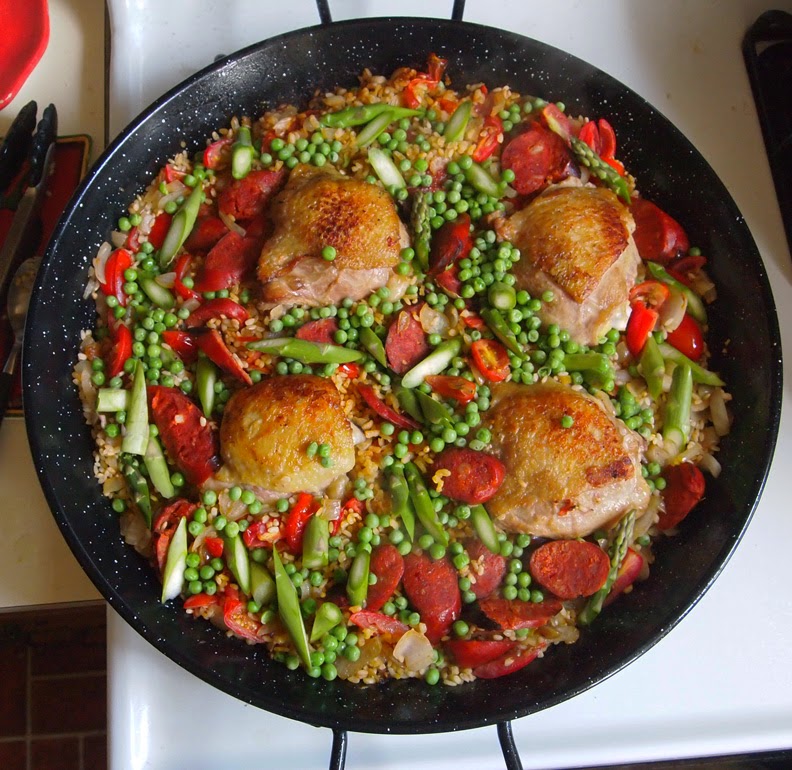 Serve a big scoop of rice and veg and chorizo and top with a chicken thigh per serving.  Garnish with green herbs.