Mr Minx and I have been doing quite a bit of research on Maryland seafood for an upcoming project. We found that shad, seldom seen these days, was a very popular product of the Chesapeake Bay. So popular, in fact, that the shad fisheries were closed in 1980 in order to allow the species to repopulate.

The shad roe, or eggs, were even more popular than the shad itself. Of course, if you eat the roe, you're killing the females, and that's not helping the population any. But there are still some areas where shad fishing is allowed (not in Maryland) and occasionally it will pop up on menus here and there, for a short time in the spring.

Out of curiosity, I checked the online menu for the Peppermill, to see if they had whales. Whales are jumbo soft shell crabs, and the restaurant usually hangs a banner outside the restaurant declaring their availability. While soft crabs weren't on offer this time, shad and shad roe were, so Mr Minx and I drove up to Lutherville to see what it was all about.

The only time I had ever seen shad roe before was in the early 90s, when a friend ordered them at Jeannier's. My palate wasn't as adventurous in those days, so when offered a bite, I demurred. They didn't look too appetizing. This time, I was determined to get over their unattractiveness and enjoy them for myself. 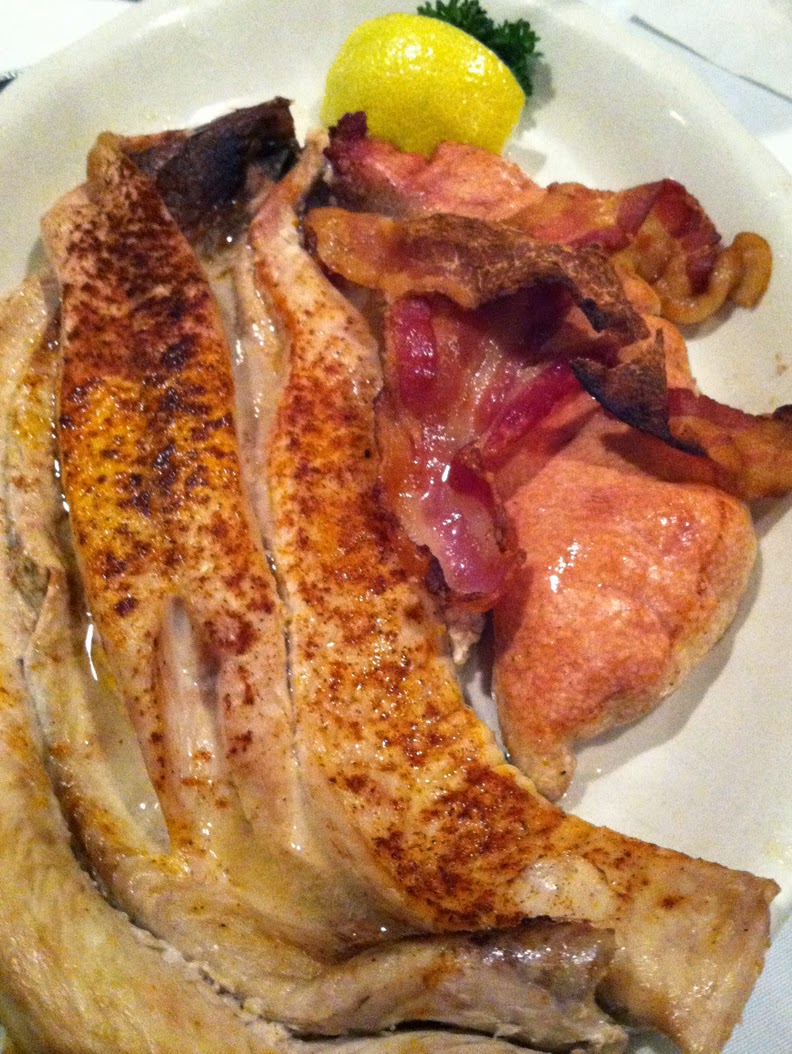 The Peppermill is one of those long-standing establishments generally patronized by people of a certain age. We always joked that we'd have to show our AARP cards to get in. Now that we are hovering around that age, and one of us has embraced gray hair, we figure we could get in without attracting too much attention. We knew that if the fixed income set frequented the Peppermill, the restaurant had to have decent prices, but would they have good food?

The answer is yes on both counts.

So on our first trip to the Peppermill, I had both a full side of boned shad (they are very bony creatures) and a half set of roe. Both were broiled in lemon and butter, and the roe was topped with bacon. The shad was $18.95 and the roe was an additional $12, so not an economically-priced dish, but the serving was enormous and we chalked up the expense to the cost of research. The fish was delicious, very moist and rich flesh with a very light flavor for what is considered an oily fish. The roe was...interesting. The sac was firm to the touch, somewhat grainy inside, with a vaguely metallic/livery flavor. It's not anything I'll rush to eat again, but it was better than expected. The bacon helped. Since I was going old school with my entree, I chose stewed tomatoes as one of my sides, along with a baked potato. The tomatoes were sweet, but not cloying, and I appreciated that the potato hadn't been swaddled in foil before baking. Mr Minx played it safe and ordered the Chicken Baltimore, a perfectly cooked and moist boneless and skinless chicken breast topped with lump crab, mushrooms, and mozzarella, in a creamy sauce. I thought the sauce was a little thin and a bit like canned chicken gravy, but that could be overlooked because the chicken itself was pretty perfect.

We didn't order dessert, and had no intention of doing so. However, my leftover shad, slated to become lunch the next day, had an unfortunate collision with the floor on the way to a carry-out container, so our gracious and apologetic waitress packed up an absolutely elephantine slice of house-made coconut cake to make up for it. The cake, enjoyed over two evenings at home, was incredible. Sadly, it's seasonal, like the shad, and only appears around Easter. 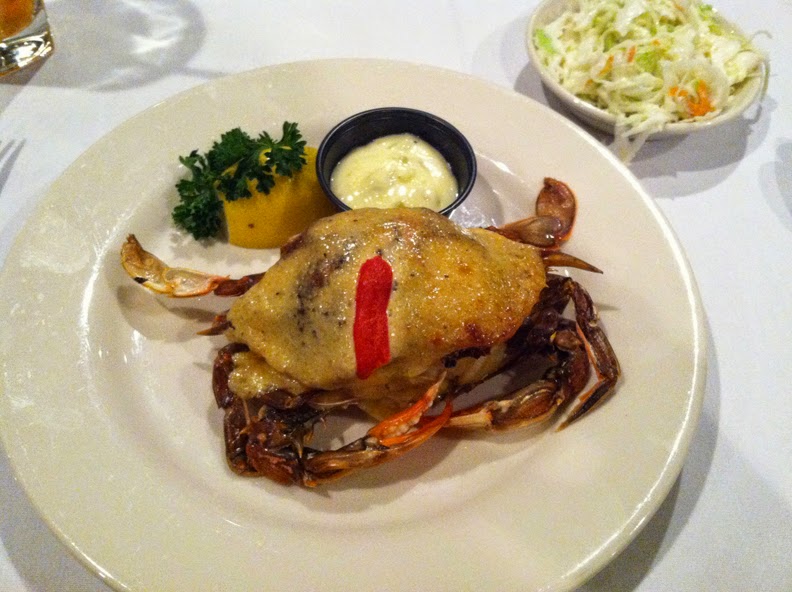 A week or so later, I was still curious about when whales would make their appearance on the Peppermill's menu, and checked online once again. Not only did they still have shad and shad roe, but also my jumbo soft shell crabs. Mr Minx wasn't heavily invested in making dinner that night, so we hopped in the car and headed back up to Lutherville.

I had a choice of two crabs in a platter or sandwich, or one or two crabs stuffed. I'd never tried a stuffed soft shell, so that was my choice. Rather than pile crab imperial on top of the carapace, the top shell had been removed and replaced after stuffing, decorated with imperial sauce, and a festive strip of pimento. The crab itself was plump and meaty, but the extra helping of crab was a welcome addition. The binding sauce was more loose than what I'm used to with crab imperial, seeming more like a light gravy than the usual somewhat gloopy binder. Quite nice. My side of coleslaw wasn't cut as finely as I'd have preferred, but its flavors were a nice balance between mayonnais-y and vinegar-y. 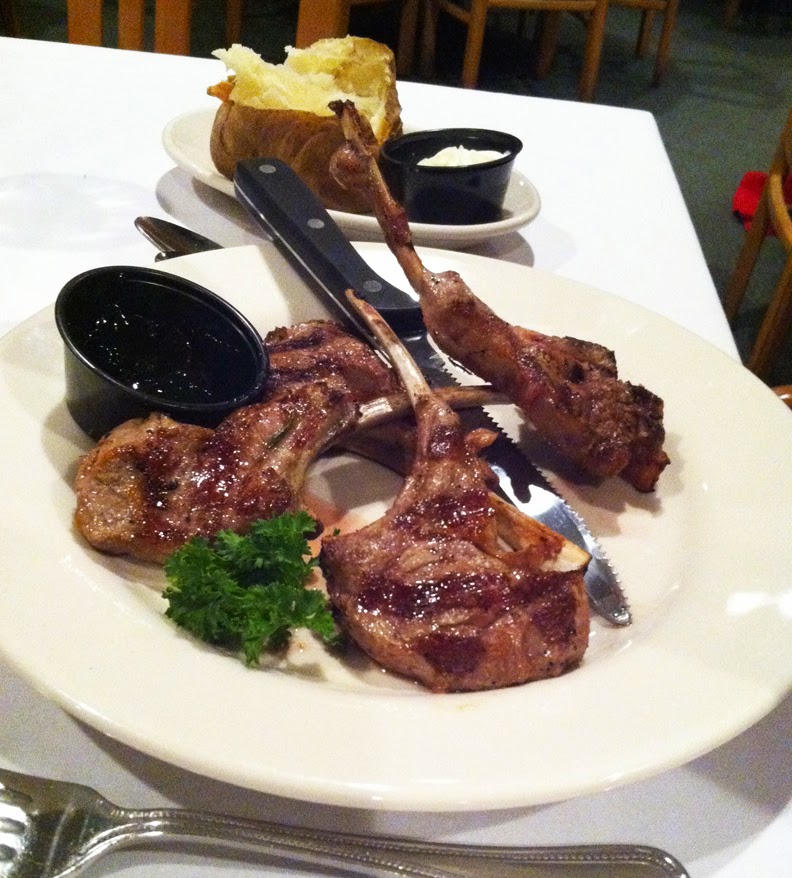 Mr Minx went for the 1/2 rack of lamb, a steal at $19.95. Four meaty lamb chops, cooked to a perfect juicy medium, had a nice chargrilled flavor and a light aftertaste of rosemary. They came with classic, somewhat scary, bright green mint jelly, and his choice of two veg. 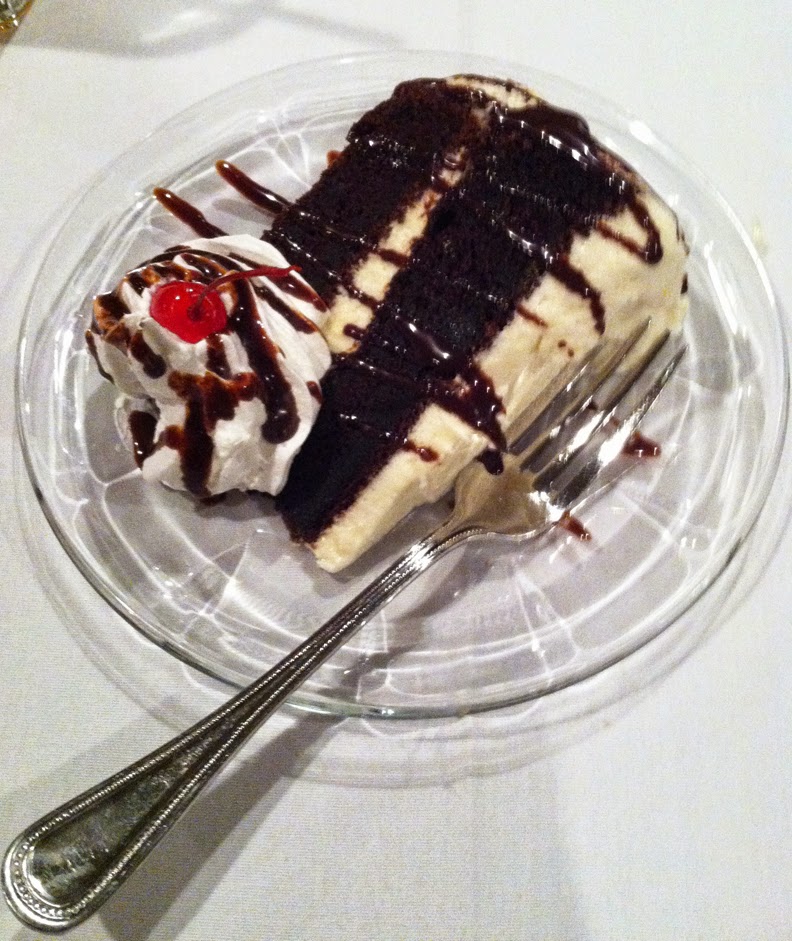 This time, due to the deliciousness of that coconut cake, we did order dessert. Mine was chocolate cake with a butterscotch-flavored buttercream frosting. American buttercream, alas, which is never my favorite, but it had a nice caramel flavor. The cake was very dense and moist and fudgy. 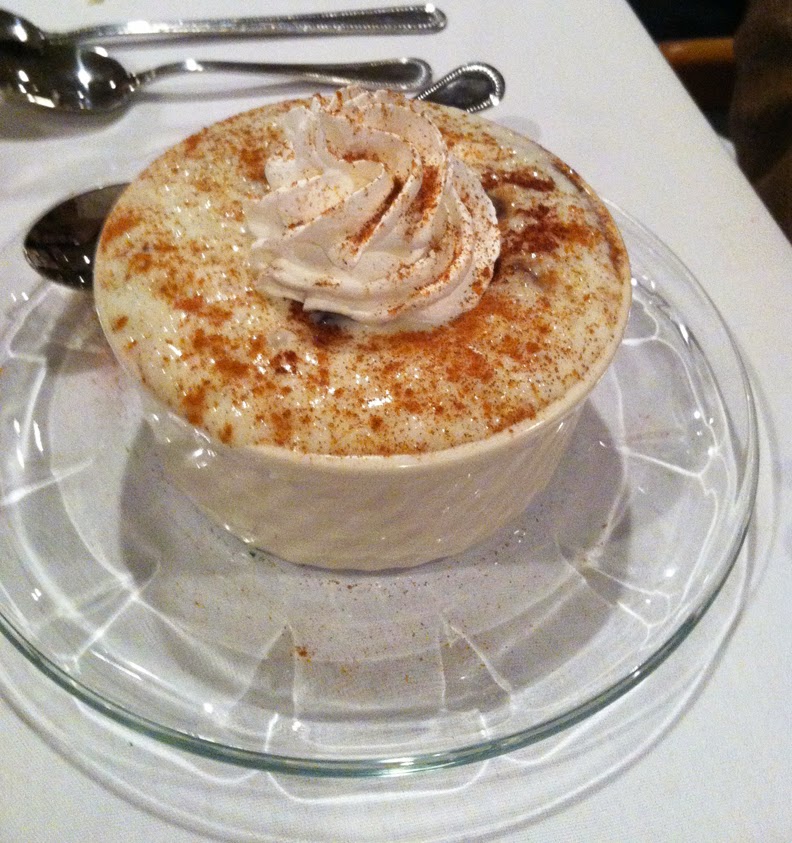 Mr Minx's serving of creamy rice pudding was huge, and studded with fat raisins. It was good enough to ignore the raisins, and he finished every drop.

While the Peppermill is a bit old-fashioned and anyone under 50 will be the youngest person in the room by at least a good handful of years, the restaurant has plenty of good points. The food is simple but well-prepared and the service is excellent. And for those of us who are sick and tired of having to shout at each other across the table in order to be heard over the shrieking millenials who were never taught to speak in inside voices, the modest hubbub of genteel folks in a carpeted room makes for a soothing dining experience.

The Peppermill isn't on your radar, hipsters. Let's keep it that way, shall we?