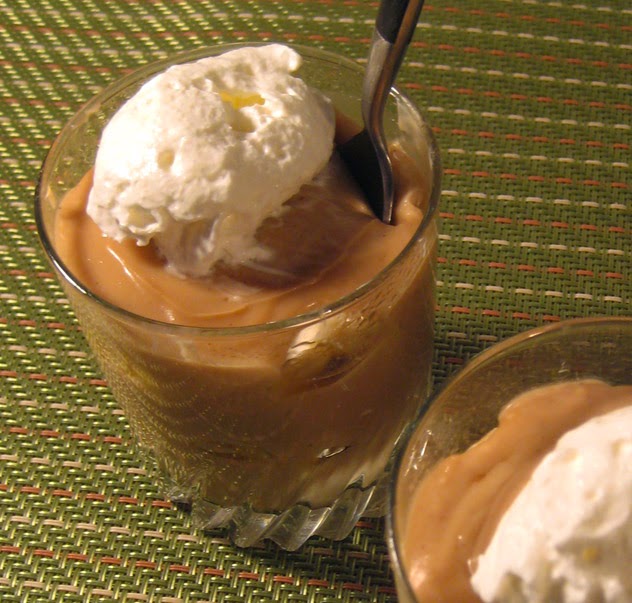 At last month's Family Meal media dinner, we ate the most delicious dessert: a twist on banana pudding made with butterscotch pudding. Just a few days later, I found an easy-sounding butterscotch pudding recipe on the Food 52 site. Entirely by accident--I wasn't looking for it. So it seemed that I was fated to make my own variation of banana scotch pudding.

I didn't want to do anything too elaborate; I am no pastry chef. My favorite nanner pudding recipe requires only pastry cream, shortbread cookies, bananas, and whipped cream. My banana scotch version is much the same, I just swapped out the pastry cream for butterscotch pudding. I think a really delish and over-the-top version might include both the pastry cream and pudding, maybe with a layer of whipped cream somewhere in the middle there, too. I didn't want to go crazy though--this is just a simple weeknight dessert.

There's booze in the pudding, folks, so you might want to keep it away from the kiddies.

Put the cookies in a plastic bag and crush them into crumbs. I used a meat tenderizer, but the bottom of a heavy glass will do. Divide half of the crumbs between four lowball glasses. Set the remaining crumbs aside. Peel and cut the bananas into 1/4" slices.

Melt 2 tablespoons of the butter in a sauce pan until it stops crackling and starts to brown, 2 minutes or so. Stir in the brown sugar and pinch of salt, then whisk in the heavy cream. Turn the heat to low.

In a bowl, whisk the milk into the cornstarch until cornstarch is dissolved. Pour this into the saucepan. Turn up the heat and allow the pudding to simmer, stirring constantly. Once pudding has thickened considerably, a minute or two, turn off the heat and add the additional tablespoon of butter, the vanilla, and the bourbon or whisky.

Spoon some of the hot pudding over the crumbs in each glass. Arrange a layer of banana slices around the edge of the glass, pushing them into the pudding so they stand upright. Put a slice or two, cut side up, in the middle as well. Add the remainder of the cookie crumbs. Repeat the pudding and banana layer, finishing with pudding. (If there's any pudding left, use a spoon to shovel it directly into your mouth.)

Press plastic wrap onto the surface of the puddings and refrigerate several hours until cold. Garnish with whipped cream and a pinch of flaky sea salt.