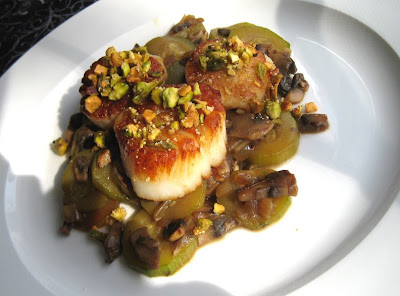 With Mr Minx away visiting a relative, I took the opportunity to concoct a dinner with ingredients he doesn't particularly like. He's not a fan of zucchini, so my first stop on the way home from work was the Giant produce department, to pick up a few. Originally I was going to sauté them with onions and mushrooms and mix that concoction with scrambled eggs, but then I spotted some handsome scallops in the seafood department. He dislikes those as well, so I purchased three of them for less than $3.

Even with a hard sear, scallops are soft. Zucchini is definitely soft, so I needed to add something more textural to the dish. Toasted pistachios, bashed a little with a meat tenderizer, not only provided crunch, but were also color coordinated. Sweetness was added by a sprinkle of granulated honey that I had received as a sample from Marx Foods, but you could use brown sugar.

I didn't make a sauce for the scallops because the vegetable mixture was pretty moist, but you could always pour a little brown butter over the top, if you'd like.

In a large saute pan over medium heat, cook onion until softened, about 3 minutes. Turn up heat and add mushrooms, stirring regularly, until they release their juices and start to brown. Turn the heat down to medium and add the zucchini. Cover pan and cook until squash is soft, stirring occasionally, about 5 more minutes. Take off cover and add salt and pepper to taste.

Remove zucchini mixture to a bowl and set aside. Wipe out the pan and set it over high heat. After after a couple of minutes, when the pan is very hot, add the remaining 2 tablespoons of olive oil. Watch carefully - it will heat up quickly. When small wisps of smoke start coming up off the oil, gently add the scallops. Cook about 2 minutes on first side, then turn them. Cook an additional 2-3 minutes until browned on bottom and mostly opaque.

Put the zucchini mixture in the center of a plate. Arrange the scallops on top. Sprinkle on the pistachios and honey or brown sugar. Squeeze the lemon over all and serve.