Since our book, Food Lovers' Guide to Baltimore, has been released, we've been asked repeatedly about our favorite restaurants. Namely - what are they?

Richard Gorelick of the Baltimore Sun asked the question during a quick phone interview, and my response was basically, "I'm fickle. I can't pick one." Which is absolutely true. I don't really have a favorite anything. (Ok, I do have a favorite husband, a favorite co-author, and a favorite house-mate - they are one and the same person.) As an example, my favorite color is chartreuse. And purple. Celadon green is lovely, and I am very fond of particular shades of pink. I've always been partial to the "mulberry" crayon in that big box of Crayolas, too. Oh, and black.

See what I mean?

I love to eat, but I don't have a favorite food. Maybe part of me feels guilty for singling out one particular thing while ignoring all of the others. Or maybe I'm just fickle. :) 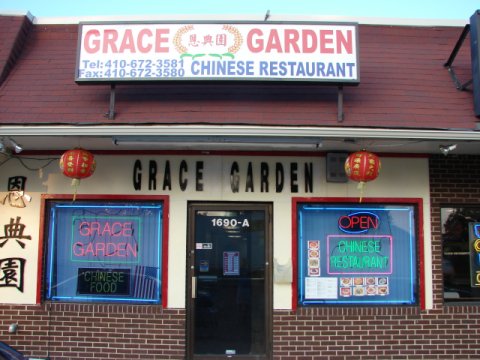 I do love Asian cuisine above all others, but can't say I prefer Thai to Chinese or Japanese to Vietnamese. I love them all equally, at different times of the day or the week or the year. Yet, when I get asked about my favorite restaurant, I usually find it easiest to say Grace Garden, that hole-in-the wall Chinese place across from Fort Meade in Odenton. There aren't all that many great Chinese restaurants in the Baltimore area (in my opinion); too many of them serve typical American-style, overly-sweetened-and-sauced glop. And that's fine from time to time, as long as the glop is tasty and well-seasoned with garlic and chiles. Grace Garden serves some really terrific stuff, as close to authentic Sichuan cuisine as I'll probably ever eat. Out of the dozens of times I've been there, I've been disappointed by only one dish, so it's probably safe to put Grace Garden at the top of my list.

And then I think about Thai food. Well, since we're talking about Asian cuisine.... Honestly, there was a time when I could say my favorite Thai restaurant was Bangkok Place, a rather ugly restaurant on York Road in Govans that was closed a few years back, razed, and is now a row of equally-ugly, presumably low-income housing. We were there every other week, to feast on tod mun pla and gaeng dang salmon. And then it was gone. While it was conveniently located near our neighborhood, we did really think they had the best Thai food in the area. The spicing was bold, the sweetness was subtle, and they didn't shy away from using some real heat. And now they're gone. Our favorite Korean restaurant, Purim Oak, met the same fate. Well, just the closure part. Maybe it wasn't the best Korean food around, but we loved it.

Crush is another restaurant that came to mind when contemplating favorites. The restaurant in the old Hess shoe store at Belvedere Square filled many needs for us. If we wanted a quick meal, they had terrific burgers and I really adored the salmon BLT. If we wanted something fancier for a special occasion, Crush also fit that bill. The small plates restaurant that opened on the lower level, Demi, was pretty special, too.

Demi closed just after I finished its write-up for the book, and Crush closed after the book went to press, too late to remove it from the manuscript.

Considering our track record for closing places down, perhaps we should stay mum on the topic of favorite restaurants, eh?