My brother and father go to Rosedale's Fiesta Mexicana pretty regularly and rave over the authentic renditions of Mexican street food known as antojitos. That pretty much includes all the stuff most Americans are familiar with - quesadillas, tacos, enchiladas - plus thicker tortilla shells called sopes, and a chile sauce-soaked sandwich called the pambazo.

There restaurant is tiny - only four tables and a small counter - but the menu offers a panoply of options. Not only are there plain cheese quesadillas, but also variations filled with beans, mushrooms, roasted poblanos, potatoes, chicken, beef, chorizo, or a combination of chorizo and potato. The quesadillas at Fiesta Mexicana are not the Americanized version made with griddled flour tortillas layered with cheese, rather, they are fried turnovers made with fresh corn tortilla dough. In my mind, closer to an empanada. 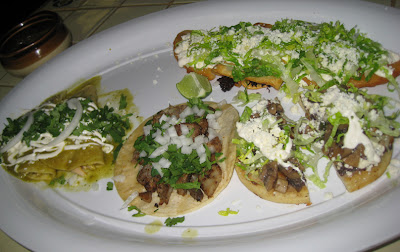 We tried one filled with chorizo con papa, or spicy Mexican chorizo and potatoes. We also tried a beef flauta, chicken enchiladas, a mushroom sope, and a carnitas taco, all of which come on the "Paquet Eduques" sampler platter. Apart from the slightly tough beef in the flauta, everything was uniformly tasty and despite some items being fried, ungreasy. The two salsas served on the side - one green, one red - were both complex with roasted chile flavors that gave a nice hit of heat but weren't overly-spicy.

Drink choices are myriad and include imported sugar-sweetened Coke and various flavors of the Mexican soda brand Jarritos, all of which are self-serve from the refrigerated case at the back of the restaurant.

Service at Fiesta Mexicana is cheerful and helpful, especially for people like us who can't make up our minds. Definitely worth a visit for those who want a real taste of Mexico. Indeed, most of the other customers were Latino, which speaks well for the authenticity of the food.