Some months ago, we picked up a package of pork belly on a trip to H-Mart. It sat in the freezer for a while because I was simply too busy to cook it. Finally, a weekend came that was relatively free of obligations, so I embarked on the Pork Belly Project. (Not really that much of a project; I just wanted to make it seem more intimidating.)

At first I thought I could cook it in the SousVide Supreme, but then I realized that would take a few days and by the time the belly thawed, it would be too late. Then I picked up my copy of the Momofuku cookbook. Dave Chang's recipe seemed pretty easy - start the meat out at a high temperature, then turn the oven down to continue cooking. But after reading Momofuku for 2's problems with this particular recipe, I thought I should alter it a bit. Rather than cook it for a full hour at high temp, I'd cook the belly for half an hour before lowering the oven temperature. 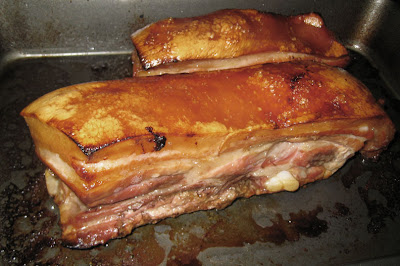 The recipe calls for a skinless chunk of belly, but I like skin so left mine on. Mine also had bones, oddly enough, so they must have been pieces from the side of the belly, including ribs.

After another couple of hours in the oven, the meat was still quite hard. Dinner time was looming (we hate eating off-schedule) so I needed to do something to make this meat cook more quickly. I did a quick google search for roasting pork belly and found another David Chang recipe, this time starting the meat slow, adding a braising liquid, and raising the oven temperature toward the end of the cooking time.

That made much more sense to me. So I added a cup of chicken stock to the pan, covered the pork, and roasted it for an additional hour. I cranked up the oven yet again, removed the foil, and gave the skin a quick crisping. 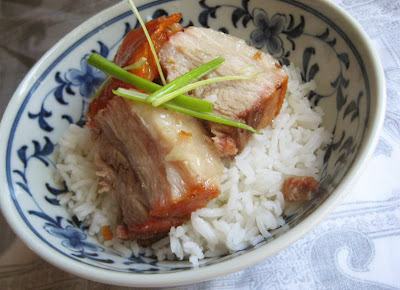 Perfection. The meat was tender and juicy, the skin was almost like a cracker. We ate some of it with rice, but also made faux pork belly buns using Martin's potato rolls in place of the steamed buns. With some hoisin, quick-pickled cucumbers, and cilantro, they were quite tasty.