This week, the Wannabes are given a big curve ball: for this Star Challenge, they will not have the comforting bosom of their mentors/producers to cry on. Or in Alton's case, a bony ribcage. 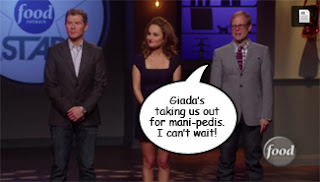 They're going to have to show how they can handle themselves with style and grace when they cook for "the press" - Serious Eats' Ed Levine and a bunch of Entertainment Weekly/ET nobodies. Honestly - do they talk about Guy Fieri on Entertainment Tonight? Is he even entertaining? I think not. In any case, the Wannabes need to create a one-bite dish that incorporates their POV, is personal to them, and is delicious.

After one hour of shopping with their Discover cards, the Wannabes head to the Food Network Kitchen at Chelsea Market to prepare their dishes. While they're cooking, they need to work on their stories, so before the mentors go off for a spa day, they make sure the contestants know they will be expected to share something personal with Tushface, Susie Fogelson, Ed Levine, and the bimbo "press."

Cooking goes off mostly without a hitch, except it looks like Martie might not finish her roulade--which she says her family pronounces "roulash"--in time.(I'm imagining she needs to make a filling of paprika-scented beef to go inside it.) Justin helps her with plating, however, and then everyone is sent to the green room to cool their heels while Malcolm makes the first presentation.

Malcolm comes out talking and doesn't stop for the entire 90 seconds. But his story about Easter lamb works, as does his "insanely delicious" lamb chop. 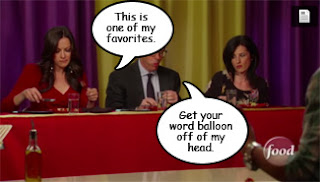 Martie goes out next and manages to get her spiel done in the allotted time. She's getting better and better at this, and the committee enjoys her "roulash." Michele is worried about the time limit, so she's rather contained, but the committee seems to like her tough yet warm persona and they enjoy her food. 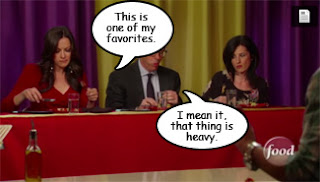 Martita comes out and makes a fool of herself by finishing up her presentation in 2/3 of the allotted time. For the last 30 seconds, she just stands there and smiles like a nincompoop. Her story was non-existent, and Tushface is completely embarrassed by her. And he should be embarrassed by her non-performance in front of such illustrious television personalities as that dark-haired girl from Entertainment Tonight, that gray-haired guy with the glasses from wherever he's from and Ed Levine.... (Honestly, there's far more gravitas on Faux and Fiends.)

Did anyone else notice that that the ET bimbo referred to EVERY dish to this point as, "it's one of my favorites?" Yeah. No wonder the Wannabes are so intimidated. I'm sorry, but I can't take anyone seriously whose main focus seems to be Kim Kardassian and her talent-less but ass-full family.

Yvan gets called out on his upspeak by Tushface. Thanks, Bob? I personally hate listening to a speaker who sounds as if every statement he or she makes is actually a question? He also didn't have much of a story, but during the Q&A session after his presentation, he tells a heart-breaker about having to dig for food in garbage cans because his family was so poor. This makes Susie cry, and the gray-haired guy says something completely unimportant. 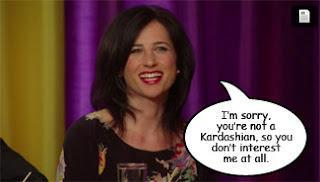 Ippy, of course, needed more energy. Susie is concerned that he's still not loose. What the hell do they want from this guy? Should he come out on a surfboard? Or dance with flaming torches? Not everyone has the energy of Douche Fieri.

Emily, for some reason, doesn't want to share her personal story, so she rehearsed some shit about her mini Thanksgiving dinner on a plate. Her delivery is halting and she really does miserably. Her "retro rad" shtick is finally failing her. And then we have Justin, who shines. He tells a story about his late dad while feeding the panel his peanut butter-and-duck-stuffed dates, which Ed Levine declares "insane." The panel loves Justin's hair, rather than his lipstick. Tushface said he saw a joy and sweetness in the young man that he never saw before. Awwwwwwwwwwwwwh! Even Tushface has a crush on Justin.

Finally, Nikki comes out doing a complete 180 from the tough bitch she was in past episodes. She makes a boring scallop dish decorated with flower petals, and the panel calls bullshit. Tushface called her scallop "sour and bitter." It's unpleasant. Well, at least Nikki put herself into her food this time.

Magically, it's the next day and the mentors are back with their mentees for some doom and gloom. Susie tells the Wannabes that all but one of them will be going to South Beach to sweat and get sand in their food, and they seem excited at the prospect. Emily, Martita, and Nikki are in contention to be that one Wannabe that goes home this week, and I say send them all home. But no - they get to duke it out in the Save Your Ass Challenge, which this week is to create a perfect burger and the presentation to go with it.

After that nonsense is over, they congregate in the Temple of the Glowing Vagina of Doom. Martita grudgingly mentions her sisters in her burger story, but Susie and Tushface aren't impressed with the burger itself. Nikki unfortunately hits her presentation out of the park, leaving the flowers behind. Emily makes a delicious burger but doesn't deliver on presentation. 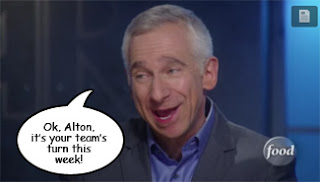 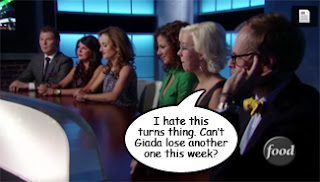 The Judges are not sure what's behind her "retro rad" personality, and though Emily might be on the right path, they don't think she'll be ready to start filming her own show in four weeks' time. So Emily gets the boot.

Back in the green room, Justin is clearly upset. Now who's he going to borrow lipstick from?

Next week: South Beach with the Queen of Dentures, Paula Deen.