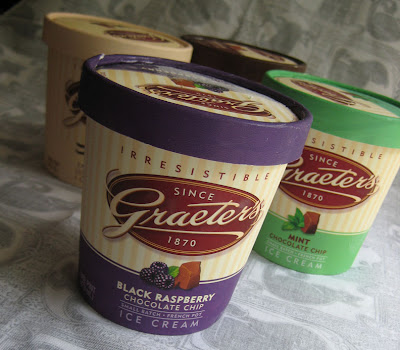 Mr Minx and I love ice cream. Loooooooooove it. We could eat it every day, but (usually) limit it to a weekend treat. This past weekend's treat was a sampling of four flavors of Graeter's ice cream, courtesy of the lovely people at Graeter's.

Graeter's, from Cincinnati, Ohio, is a super premium ice cream made with the French pot method. A French pot is not so different from the type of home ice cream maker many of us own, comprising a freezable liquid-filled metal liner, plastic outer casing, and a lid with a crank. In this type of machine, as the liquid base freezes onto the sides of the liner, it is scraped off with the paddle attached to the crank. This technique doesn't allow for much air to get whipped into the cream, so the end result is dense and rich.

Graeter's is definitely dense and rich, and contains somewhere between 16-18% butterfat. No wonder it's so darn good. We got to try four flavors: black raspberry chip, vanilla chocolate chip, double chocolate chip, and mint chocolate chip. "Chip" is really a misnomer. "Slab" might be more accurate. Rather than mixing in bits and pieces of chocolate into their ice cream, Graeter's pours a melted chocolate into the pots. After it solidifies onto the frozen cream, a worker breaks it up and mixes it in, creating chewy chunks of chocolate. 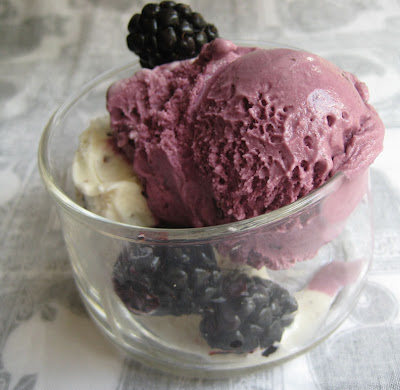 I couldn't tell you which of the four flavors is my favorite. The vanilla chocolate chip is well-balanced, flavor-wise, and not overly vanilla-y. The black raspberry chip has intense fruit flavor (and color), and the mint chocolate chip tastes like real mint. And while I'm not a huge fan of chocolate ice cream, unless it's home-made, Graeter's tastes pretty fine. And the chewy chunks of chocolate are a bonus in each flavor.

Looks like we might have to do another taste test tonight. And maybe tomorrow night. You know, just to make sure we really like it. (We do!)

Graeter's is now available in grocery stores all around the country, including Mars, Fresh Market, and Weis in the Baltimore area, but you can order it from their Web site, http://www.graeters.com.

* The  products in this post have been provided to Minxeats by the manufacturer. However, all opinions belong to Minxeats.