I'm going to guess that most of my readers grew up eating that particulate matter in the metallic green cylinder, the pasta product in the blue box, and the bright orange rectangle of an easily-melted substance. I'm talking Kraft Parmesan, Kraft Macaroni & Cheese, and Velveeta. You probably also ingested Kraft Singles, Kraft Mayonnaise OR Miracle Whip (but never both), and Cool Whip. Me too. Our house was always full of the various products that currently fall under the Kraft Foods umbrella (and they are legion, after mergers with General Foods in 1989 and Nabisco in 2000). One of my favorite treats as a kid was Philadelphia Cream Cheese on Ritz Crackers, and my Aunt Stasia made outstanding lemonade by adding Tang to her fresh lemon juice and sugar. While we didn't eat Oscar Meyer hotdogs (Grampa's employer, Esskay, was the only brand allowed in my house) we almost always bought Oscar Meyer bacon.

While I've graduated to freshly grated Parmesan on my pasta, home-made mac & cheese, and real cheese in my grilled cheese sammies, I still consume my fair share of Oreos, Nutter Butters, and Grey Poupon. Crystal Light Pink Lemonade replaced Tang in my diet sometime in the mid-80s and it's still a favorite summertime beverage of mine. And I love Triscuits but I never buy them because I'd eat the whole box in one sitting (and then pay the price).

Recently I received a selection of complimentary Kraft Foods products, new-on-the-market items, and I'm here to tell you exactly what I think about them. 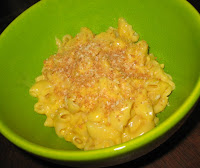 • New KRAFT HOMESTYLE DELUXE Macaroni & Cheese Dinner: My late Uncle Frankie loved Kraft Mac & Cheese and I'd eat it when Grandma made it for his dinner (two boxes). Mr Minx was partial to the stuff as well, but I've broken him of the habit.

I'm not sure why this new Homestyle Deluxe version exists. It involves packets of "seasoning" and breadcrumbs, plus a packet of Velveeta-like ooze. One has to not only cook the pasta, but also to cook the seasoning with milk in a separate pan, then mix it and the cheese and some butter with the drained pasta. Sorry, but home-made mac and cheese involves one fewer pot. And it tastes better. This stuff was too salty, too gooey. Twice as much macaroni probably would have worked better with the amount of cheese provided. The bread crumbs were far too uniform in texture and served only to add a granularity.

I suppose people who already buy Kraft Mac & Cheese products will buy this one too, but I don't think it has anything to offer the new customer. Stick to the blue box.

• New KOOL-AID FUN FIZZ Drink Drops: I drank Kool-Aid all the time and preferred when Mom used the sugar-added version because I never felt she added enough sugar to the unsweetened version. However, these Fun Fizz Drink Drops are quite sweet. The directions call for adding one tablet to 8 oz of water. Grown-ups don't drink 8 oz of anything, so I first tested it in 16 oz of water and produced a beverage that was puh-lenty sweet. The good news - the sweetness does not come from either sugar or HFCS. The maybe not-as-good news - it comes from a battalion of artificial sweetners including Aspartame, Sucralose, and Acesulfame K. Hey, but it has only 5 calories per serving!

• RITZ CRACKERFULS Filled Crackers: When I was a kid, I thought that Ritz Crackers were the only kind of cracker in the world, because that's all my Mom ever bought. Then a box of Chicken in a Biskit surreptitiously arrived in my Grandma's kitchen and ruined me for Ritz.

As for the Crackerfuls: I guess the cheese was Cheddar-y, it was cheesy at least. And the crackers were not Ritz-like at all, but crisper, less-flaky. Pretty good. Made a nice mid-afternoon snack with a glass of Kool-Aid. 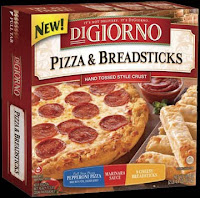 • New DIGIORNO Pizza & Breadsticks: I don't understand the concept of eating pizza AND breadsticks in the same meal. Isn't the crust enough starch? I'm sure there was tons of marketing research done to produce this product, so what do I know? Anyhoo...I was a DiGiorno virgin before I tried this pizza, and I haven't eaten frozen pizza in decades because the stuff is usually so nasty. However, I think this one was pretty darn good. The crust got nice and crisp, even though I cooked it on a baking sheet rather than putting it directly on the oven grate, as directed. It had a biscuit-y quality to it, which I much prefer over the doughy mess found on most delivery pizzas. The breadsticks may have been the same dough, but they were a bit thicker and seemed breadier. The accompanying marinara dipping sauce was a bit too sweet for me though.

• New KRAFT 100 CALORIE PACKS CHEESE BITES: I used my coupon for the Mozz/Parm/Cheddar combo. 100 calories worth of cheese isn't much, you know? But it's a fine size for a snack. And you all know what cheese tastes like. Cheese.

So basically everything tasted just fine. It was all pretty much of the quality expected from Kraft. My biggest beef with these products was the shameful amount of landfill-ready garbage it produced. Both the Kool-Aid and the cheese came in a plastic pouch full of other small pouches. The Crackerfuls were individually wrapped and each pack included a waxed cardboard insert. The Mac and Cheese comes in a bag rather than a box, and there were three foil-lined pouches inside. I hate that "convenience" means "bad for the environment."

If you've read this far, you're probably thinking, "ok, now where's the giveaway? You mentioned a giveaway in the title and I want free stuff, dammit!"

To win, please leave a comment and tell me what is your favorite Kraft product. (You can find an alphabetical listing here.) I will choose a winner via random drawing (putting all of the names in a mixing bowl and picking just one). Please make sure to leave your e-mail address in your comment so I may contact you if you are a winner.

The fine print: This promotion is not linked to Kraft Foods, and Kraft Foods is not responsible for conducting the promotion or for selecting the recipient. All opinions expressed in this post are that of the author and not of Kraft Foods.

Entrants must be 18 or older and located in the US or Canada only.

We guzzle Crystal Light lemonade by the pitcherful - we usually have to mix a new pitcher at least once a day and sometimes more often.

I haven't tried the new Kool-Ade drink tablets, but they remind me of something called (if I recall correctly) "Fizzies" that my mother used to get when I was a kid. Same concept: drop a tablet in a glass of water, watch it fizz, and then drink it down. I may have to get some of the Kool-Ade product just for old times' sake.

My favorite Kraft product is Kraft Singles Select American Slices :) *Thanks* for the giveaway!
theluckyladybug[at]gmail[dot]com

I must admit that I very rarely eat anything prepackaged or mass produced anymore. That said, I do love an occassional grilled cheese on rye with Kraft singles.

This is hard...I love so many products Crystal Ligh, Light n' Lively, Jell-O, and Wheat Thins. I guess if I had to choose one I would pick Zweiback. There is noting better than a cheesecake with a Zweiback crust.

Since it is summer time I am going to pick Jell-O. What is summer without some jigglers.

My favorite product is the good ole Macaroni & Cheese in the blue box. Love that stuff.

Like Cheryl F my favorite is the Kraft Singles select. My local stores don't seem to have it anymore and googling it led me to this blog and also seems to indicate it's been discontinued. Very sad, it is SO much yummier than normal singles OR Deli Deluxe.