I've whined here on many an occasion about the dearth of really fine Thai food in my area. While most restaurants serve some variation on some of my favorite dishes - panang curry, tod mun, tom kha gai - the curry and soup are usually far too sweet and the fish cakes are greasy. So when given the opportunity to try dishes from the "secret" menu at Bangkok Garden, in Columbia, Mr Minx and I jumped at the chance.

We were not disappointed.

We started out with a trio of appetizer-type dishes. 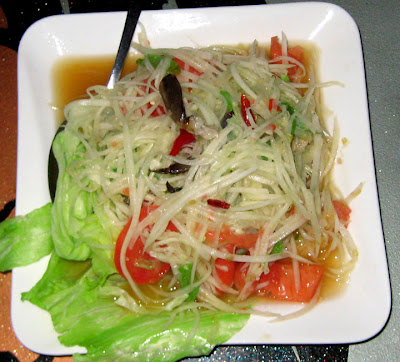 Som Tum Thai - green papaya salad with marinated crabmeat. I really didn't notice much crab meat (although we did get a couple of random legs). I'd never eaten green papaya before, and I'm happy to report that it doesn't have the same vomitous pre-digested quality as the ripe stuff. However, the crab and lashings of fish sauce gave the dish a "garbage" essence. But as one of my dining companions, Kwan, put it - "garbage in a good way." 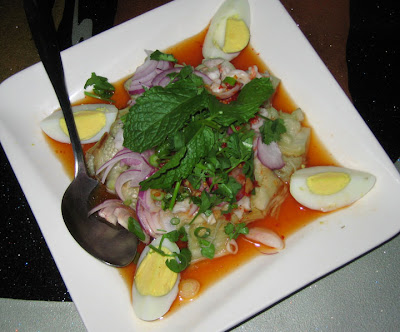 Yam Makheua Yao - warm salad of smoky grilled Thai eggplant. I loved this! The meltingly soft eggplant paired with red onion and mint in a bright citrus dressing was heavenly. I could easily have eaten a whole order myself. 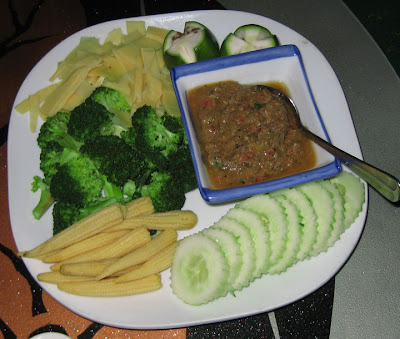 Naam Prik Plaa Raa - fermented fish paste dip with sliced raw vegetables. This was my least favorite of the dishes. While it was tasty enough and not too fishy, it was difficult to eat as a dip, particularly with thin slices of bamboo shoot. It just didn't scream, "more" at me.

Next came the entrees. 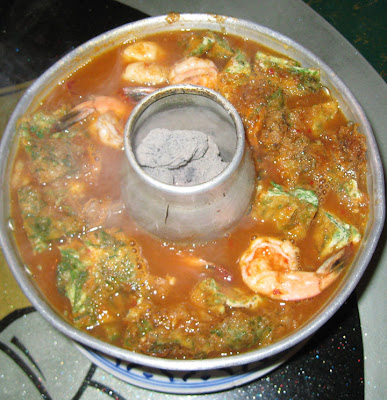 Khang Som Cha-Om Kai Sai Koong - hot pot of sour red curry broth with shrimp and acacia omelette. This was simply delicious. I loved the bits of spongy omelette that had absorbed some of the rich, tangy, and tomatoey broth.  I scooped every last drop out of the hot pot because it was too good to waste. 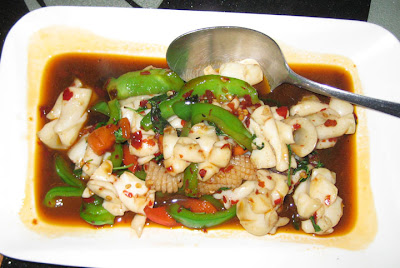 Pla Muk Pad Kra Pow - squid stir fried with sweet basil leaves. This was very good, with fairly tender squid that had been scored in the traditional Thai style that leaves it looking a bit like ginger flowers after cooking. I thought the dish could have used a tad more basil, but the dish was a favorite around the table. 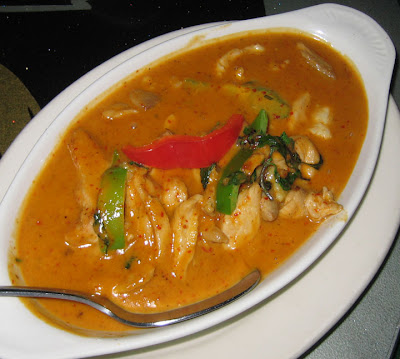 Panang Kai - red curry with chicken. Before this dish came to the table, I mentioned to the group that although I love penang curry, I find it is often too sweet. And such was the case at Bangkok Garden. Sweet indeed, but it still had a nice depth of flavor that put it above other such dishes I've eaten elsewhere. (But still no match for the aromatic perfection at Bangkok Place.) 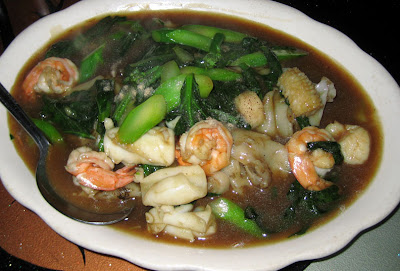 Raat naa taleh - wide noodles with seafood. The components of this dish came in a thick gravy-textured sauce that was quite different from all of the other sauces; unfortunately I think the preponderance of sauce made the noodles soggy. This was, however, better than the too-tough undercooked noodles we had at Bangkok Delight last Fall. 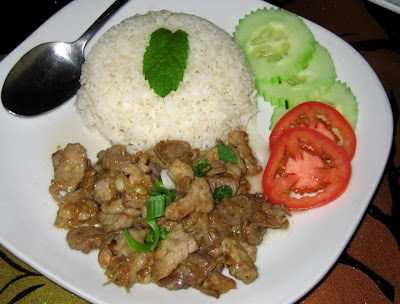 We also had a dish of pork with garlic and white pepper. I wish they had brought a bigger portion for our table of 7 people because I enjoyed this one very much. It was simple and flavorful.

Finally, we shared a dish of perfectly ripe mango and still-warm sticky rice topped with a bit of coconut milk, one of my all-time favorite desserts.

Overall, I give this meal a pretty high score. I loved the variety, and the chance to try things I might not normally try. I had originally thought that the heat level would be incendiary, since we were ordering from a menu that was written in Thai, but found that the heat level was perfect for me. Ok, I gasped twice, but a bit of rice mellowed things out nicely.

There will definitely be trips to Bangkok Garden in my future.