There was a big package of country style pork ribs taking up room in the freezer, and a fridge full of condiments that were preventing us from storing the fresh produce we recently bought. So the lot of them became part of last Sunday's dinner.

While nosing around in the fridge, I found about a tablespoon of cherry jam, half a preserved lemon, a quarter cup of chipotle salsa, and about 1/3 bottle of barbecue sauce. There was also a full jar of locally-produced apple and raisin chutney that I bought at the Towson Farmers' Market last year, half a container of Korean black bean paste, and a plethora of chopped scallions. In addition to the store-bought condiments, there were also leftover bits of home-made puttanesca and romesco sauces. (I haven't even touched on the dozen or so other jars of various spice pastes and chile sauces that also live in the fridge.)

And I mixed it all together and called it "sauce." 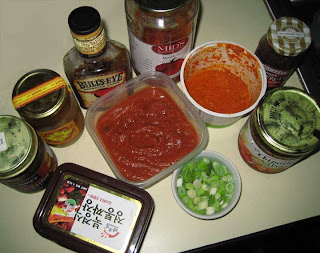 I used only a few tablespoons each of the chutney and the black bean paste and about 2/3 of the bbq sauce. I also added a pork bouillon cube, about a teaspoon of chile powder, half of a fresh lemon, and a cup or so of water. After several hours of simmering with the pork ribs, the sauce grew dark and rich. The end result was a very nice tomato-based barbecue sauce with a lot of character. It was a little spicy, a little lemony, and only very slightly sweet.

It took me back to my childhood, not only to the lemony sauce my mother served with ribs or pork chops, but also to the ribs my Aunt Stasia made. And back in those days, the most perfect accompaniments for slow cooked ribs were rice and corn. We had some fresh bi-colored corn on hand and it was extremely sweet despite being picked who knows how long ago. There was also a big bunch of asparagus in the fridge, so we had some of that as well.

Despite not knowing what I would have as the end result of mixing so many disparate condiments together, I think the dish turned out quite successfully. It tasted as if it had been completely intentional, and I suppose it was. 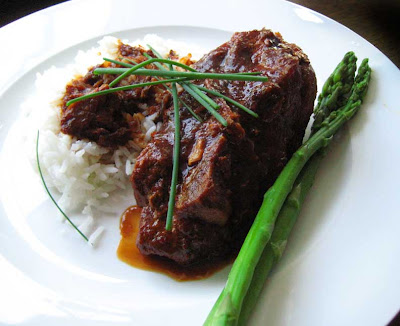 What do you do with little bits of condiments and sauces that are left over in your fridge? Do you throw them out, or do you use them to make something yummy?
Posted by theminx

My friends were always telling me how full my fridge was, but there was never any "food" in there. It was all condiments (5 different mustards!) and such. I finally moved the ones I don't use often to my second fridge in the garage and now it looks empty. I try to use it up, but I'm not as creative as you are, so it usually ends up in the trash.

Minx, about once a year I get the urge to purge all the random condiments taking up space in the fridge. I know I should be better about using them...but I'm not.

Wow,looks good! I do the same thing, try to incorperate them all togather to make a marinade or "bbq" sauce, sometimes it works and sometimes it doesn't. Great pic!

A condiment would have to get really nasty before I would throw it out. Jam or jelly-filled muffins, for example - put a generous spoonful of muffin batter into a cup, add a small spoonful of jam, and top with more batter. And there's usually a way to incorporate anything into a marinade.

Wow, that looks absolutely delicious. I am inspire to go through my fridge and get creative. I have some Xagave syrup just sitting there begging me to use it.