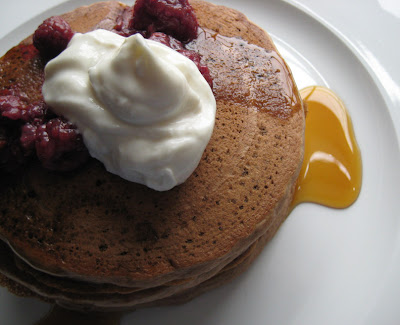 Among the special ingredients bought for those damn brownies was a carton of egg replacer. Pancakes seemed a good way to use some of it, so I substituted 1/4 cup per egg called for in my usual lazy packaged-pancake-mix pancakes.
Pancake mix usually turns out some pretty flannely cakes, so I always add at least a half cup of some additional moist ingredient. I like plain or vanilla yogurt, pumpkin, or mashed bananas most of the time, and this time used the yogurt. I also tossed in a heaping tablespoonful of Ghirardelli Sweet Chocolate and Cocoa for a chocolate-y pancake. Unfortunately, the combo of 0-fat yogurt, cocoa, and egg replacer made for somewhat dry pancakes, although they were nicely fluffy and did not suck up too much syrup.
I topped mine with a dollop of yogurt and some canned raspberries (Oregon brand - a hold-over from my childhood), as well as real maple syrup. They had potential, but weren't quite there.
Maybe I should have made some bacon on the side. :)
Posted by theminx

Hop over to Theme Thursday and add your link for this post since today's theme is 'breakfast'!