We had tacos for dinner the other night, using up bits and pieces of leftovers: pork tenderloin from the weekend, and both black beans and reduced-fat sour cream from that brownie fiasco. I mixed the beans with the dregs of a bag of frozen corn and concocted a kind of warm salsa, seasoning it with cumin and both jalapeno and ancho chile powders. Three wilting scallions were also called into action that evening, as was a fresh avocado, TJ's Chipotle salsa, and some whole wheat tortillas. 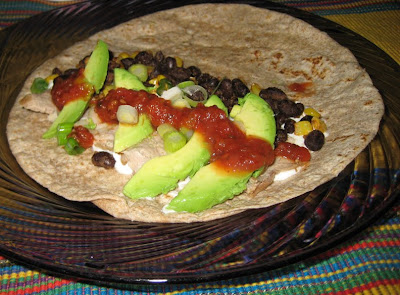 As we were eating, Mr Minx remarked that he would have liked to know about doing something like this in his bachelor days, but back then, a "taco" to him involved one of those nasty u-shaped hard-shell things that come in a yellow box, filled with ground beef mixed with ultra-salty packaged seasoning. He knew of flour tortillas, of course, but never thought to use them at home for anything. They seemed to be the jurisdiction of restaurants specializing in fajitas and burritos. Now we eat flour tortillas all the time - usually filled with whatever might be hanging around in the fridge.

Long have I toyed with the idea of writing a cookbook on using leftovers creatively. There's no need to eat three-day-old pork tenderloin with the same sauce and sides it was served with originally! Use it in pasta sauce, or on pizza, or...in tacos.

Would anyone be interested in my book, should I ever write it?
Posted by theminx

That sounds yummy! I'm always trying to use leftovers creatively myself. Soft tacos and stir fries are usually what I do. However, the other day I made a sort of salmon biryani by throwing together some baked salmon and some white rice (didn't have basmati on hand in the fridge). It worked for me.

Biryani is another great way to use leftovers - I like to mix in a little bit of Patak's biryani paste, and then it doesn't matter what kind of rice you use.

I would defintely read your book when you write it. My refrigerator is a leftover graveyard with bits and bytes of all kinds of stuff. I'm pretty creative at constructing edible meals out of the pieces but could use a kickstart to try different things. Let us know when it hits the shelves.

I'm currently on the lookout for some good whole wheat tortillas (sadly, we have no TJs here, but we do have Whole Paycheck, etc) . . . all the ones I've seen are either not whole wheat, or they have all kinds of extras added to them. You would think that here in the heart of tortilla country they would be easy to find, but nope!

I love making tacos out of leftovers . . . I think that's how they were invented, actually!