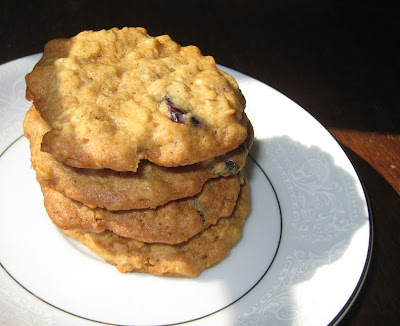 I finally found a recipe that made oatmeal cookies the way I like them - somewhat puffy and crunchy, not flat and overly-crisp. But I'm loath to admit where I found the recipe....

I'm no fan of Mr Ferry and his attention-hog persona. He reminds me of the much-despised spouse of a friend of mine; while there's no physical resemblance, they have the same "look at me!" quality that I find obnoxious. Anyhoo...one good thing I can say about Ferry is that his recipes tend to involve real ingredients, not Big Macs or boxed macaroni and cheese like some other Food Network "talent."

I was actually looking for recipes to ridicule when I found this one on the Food Network site. And seeing that it called for 2 cups of flour and 2 cups of oatmeal to only 1 1/4 cups of sugar, I thought it could be a winner. It also has a few unusual ingredients - dried cranberries, coconut, and rosemary. That's right - rosemary.

I made one batch plain, one with rosemary and cranberries, and one with all of the mix-ins. And damn - they're pretty good! The rosemary is very subtle, and Mr Minx thought the combination of herb and dried fruit was a bit like stuffing. But sweet. And good. And definitely worth making again.

Please don't hate me because I kind of like him, maybe because he is from Northern California. I actually voted for him.

I was reading on Huffington Post that El Bulli in Spain is closing it doors. They are going to make the place into a cooking academy.

Voted for him? You mean as a Food Network Star?

I've read a couple things about El Bulli recently. I don't know about the cooking academy, but I have heard that Adria plans to close it for 2 years and then reopen it. What happens remains to be seen.

Yes, on Food Network Star. Here is the article I read.

This article has him denying that. We'll just have to wait until 2014. Not like I am ever going to get there anyway. :)

I found a mix of dried cranberries and pomegranate seeds at Trader Joes that I think would be very good in oatmeal cookies. Recently, I made the recipe on the inside of the Quaker Oatmeal box and they were not flat at all with 1.5c flour and 3c oatmeal.