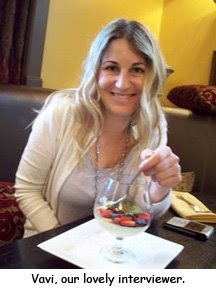 My friend Vavi was visiting Los Angeles recently and decided it would be fun to take a road trip to Top Cheftestant Fabio Viviani's restaurant, Café Firenze, in Moorpark, Ventura county. And while there, she thought, why not see if she could get an interview with the man himself? I thought it was a brilliant idea (and wished I was in LA with her). So after a couple e-mails and Facebook messages back and forth with Fabio, Bravo, and his publicist, a date was set.

Mr Viviani was gracious enough to have quite a long conversation with Vavi and her friend Meredith, and pose for photos afterward. And have lunch. The Minx was quite jealous. But, I now have the exclusive interview to publish here on MinxEats.

After receiving the audio interview, it took a couple days to transcribe. Huge thanks to Mr Minx for taking care of a big chunk of that duty.

Part One of the conversation follows; part two will be published on Friday the 10th. Enjoy!

So did you have fun on Top Chef?
I had fun learning a new experience. It’s not cooking. I cook for a living everyday, 12, 13 hours in the restaurant business. It’s quite different. It’s not a learning process. You go there and you try to do the best with what they throw at you and most of them, quite frankly, don’t happen to you everyday. They actually don’t happen. It’s not everyday that you have 3 minutes to come up with something or 10 minutes to work out fine dining with frozen food. Who cooks with oats, really?

It’s different from the restaurant business because you are out of your element. You don’t enjoy the experience. You don’t enjoy the cooking because most of the time you look like a retard. I don’t overcook meat in this business. I don’t undercook meat in this business. It’s just over there you are out of your element, so, I did the best that I could. I tried to stay myself. I wasn’t playing, I wasn’t faking it, that’s myself. So I enjoyed the outcome. People liked it. That’s the way I look. That’s the way I am. Some of the other kids are not happy with the outcome or what they look like but, guess what, that’s what they are. If you do something or you say something, nobody’s faking it. Everyone’s blaming the TV that they look like an ass but, they can show what you said, but they can’t put words in your mouth. It doesn’t matter how much beer you drank or what you were thinking at the moment, it’s done.

I did enjoy the experience overall. It’s good to see what’s going on on the other side of the fence. I refused to do season 2, season 3, season 4. We were still very busy when I decided to do season 5, but I thought, a little exposure doesn’t hurt. We doubled our sales in this economy. I’m opening three more restaurants, working on a second book, and I have all sorts of licensing deals.

That’s the book, “My Son is...“
“My Son is on Google – Recipes and Memories from an Italian Mama.” It’s made from me and my mama. She’s telling me what I did right or wrong growing up and I’m pairing recipes with those eras in my life. It’s fun. The first book coming out, The Café Firenze Cookbook, is also fun. I walk people through recipes in my own mind. Why we should do this or that. The only cookbook that will make you laugh your eyes out of your head.

So you didn’t look at any of the blogs?
No, I have a Web site. I have a publicist. I receive everything that’s going on on the blogs. I don’t go there on purpose because what little time I have, I don’t go there. If you go on the blogs, you see Stefan is always there. He reads, he answers. I don’t have time. I’m busy yeah…

It’s funny because he (Stefan) responds back and he gets the interaction going…
Yeah, and to me it’s a waste of time because... 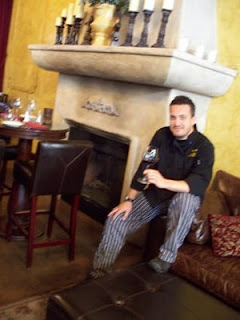 Well, he’s quite busy as well.
He’s very busy. I know he’s very busy. That why we don’t hang out lately. I actually don’t have time to go there and answer blogs. I prefer to answer all the nice e-mail I get everyday. I don’t want to answer someone who thinks I’m an idiot or something. I don’t plan to change it.

But how do you deal with the media attention? I mean, basically going from having your own restaurant and people knowing you to having the celebrity chef thing?
I don’t call myself a celebrity chef. I call myself a chef who happened to be on television. I do good food and I am myself. I keep doing good food. I was on Good Morning America a few weeks ago. Two weeks from now I’ll be on the Today show and Good Morning America again.

You’re becoming a celebrity chef.
Uh…I’ll let you say it. ‘Cause I don’t want to sound like “big time.” I think celebrity chefs do more TV and less cooking. I still work for 12 hours in the kitchen everyday. So it’ll take some time to say “yes, I’m a celebrity chef,” but I don’t think I’ll ever get there. I’m going to stick with my food and my restaurants, my people. Try to make people happy. That will bring me to be a celebrity. That will build my business. That’s not my goal. I want to make good food, good restaurants. That’s my goal. But it’s nice to do the talk shows…

It’s been good. It’s incredible, the attention. Since I got kicked off, I received a little over 2 million e-mails. That’s a lot of people there.

Saying how much they love you on the show and...
And, “Fuck you!” “Screw you, they kick you out. I’ll never watch Top Chef ever again!” And I’m like, “Guys, it’s okay. It’s a competition. You can’t always win.” And still, I’m getting a good deal out of it. I don’t think to ask what Hosea is doing but...

Do you keep in touch?
Not really. I’m very honest. It’s silly to pretend you’re best friends because you’ve spent 6 weeks together in a house. I mean, I like all of them. I respect all of them. If I’m in New York, I call the ones who live in New York. Stefan, he lives 30 miles away, so it’s very easy to hang out with him. But he has his own business, I have mine. We talk once in awhile, but best friends is something different. I have three friends, but I know 2 million people.

Did you learn anything from them? Did you learn any new techniques?
Not really. When you’re there, you don’t learn much. You think about your food as best you can, but you don’t really pay attention to what others are doing because in the end, it’s a last person standing competition. So you hope that everyone else screws up so you can take the prize home.

How do you keep the food warm on the show?
You can’t. That’s why I got screwed a couple of times and I got upset. Especially the show with the “great chef” Scott Conant. The “great chef” was judging my food, he said my venison was overcooked. I said, “Fuck you. Honestly, you asked for a bite-sized portion, I sliced the venison thin. It’s sitting there with a hot side, in a hot sauce, for 10 or 15 minutes for camera reasons, because you have a wet head and you need powder and because they had to take pictures. Of course it’s overcooked!” And as a judge, he should’ve taken those things into consideration. But, because it’s a TV show and nobody sees it, and now everyone thinks I overcooked the venison. I threw a fit with him. I thought I was going home. I threatened his life almost. They didn’t show what I said, but I was like, “Dude, don’t go there!”

Vavi is just the cutest thing EVER!