The Next Food Network Star - FINALE

The end to this excruciating contest is now upon us!

The three remaining wannabes are now back in NY for the finale. The beginning minutes of the episode is dedicated to filling us in on the activities of the past eight weeks, both the joys and the heartbreak of psoriasis.

We finally see the wannabes trooping into the Food Network studios and meet with Tushface and Fogelson about their final challenge. They are to create 4 1/2 minute pilot presentations of their own shows, to be filmed in Rachael Ray's kitchen. 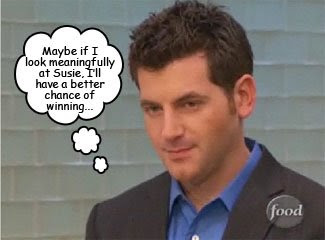 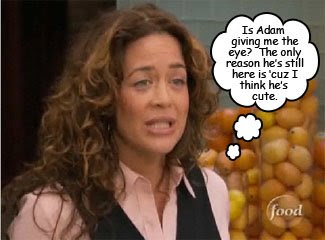 They will be creating their shows under the watchful eye of Executive Producer, Liverpool-born Aussie Gordon Elliot, he of Follow That Food and Doorknock Dinners (among other failed TVFN shows) fame. The first task is to put together a pitch that will be the basis of the show. Cut to Lisa telling us she's not a "one-trick" pony as she swaps out her Louboutin stilettos for Ferragamo loafers. "See? Sometimes I'd don't wear heels!"

She gives three pitches to Elliott, each presented as a gift in a box, with props: "Beautiful Basics," "Pure and Simple," and "Fashion Feast." Elliott likes the first one best.

Aaron wants to work with something bold and spicy, but doesn't have a name. Elliott suggests they go with his nickname, "Big Daddy," and add "'s Kitchen" to it.

Adam knows he wants to be "Hungry in Philadelphia" (a la Sleepless in Seattle) and his schtick will involve talking to people over the Internet, answering their culinary questions and interpreting their recipes. He seems to have put some genuine thought into the whole thing, which inexplicably makes me like him. 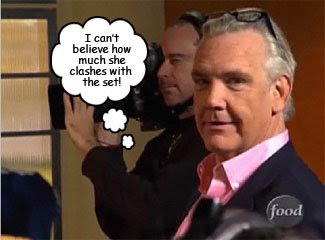 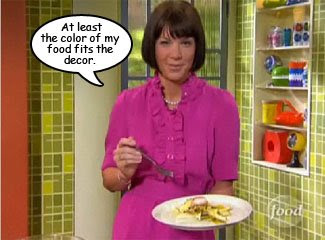 Lisa goes first (aren't they so gentlemanly?) in an eye-popping fuchsia dress, and it seems like they shoot only a few takes while making the poor gal nervous and rushed. Probably because the dress is blinding the crew and they want her out of there asap.

Adam is second and he realizes that he's probably bitten off more than he can chew. Again. His Internet caller," McCall," is annoying him by asking too many questions that he probably cannot answer. My estimation of his abilities once again plummets to its original level. 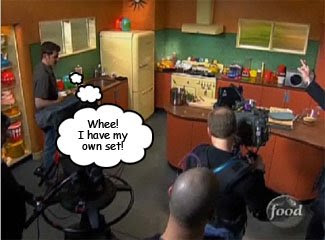 Aaron takes his turn and as always, looks the proverbial deer in the headlights. He seems awkward and scared during the whole thing. 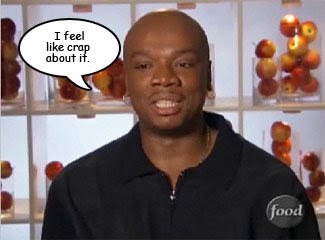 Then we cut to the finale. There are 100 guests, plus the selection committee. All of the old wannabes are also brought back so the fact that none of them are finalists can be rubbed in their faces. Cruel, cruel Food Network. I half expected to see Emeril brought in for the same treatment. 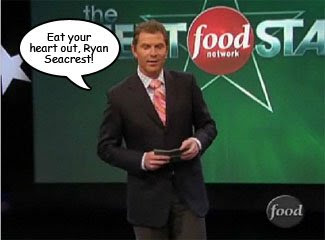 Bobby Flay acts as host of the show, and once he starts introducing the three finalists, I'm reminded of cheesy game shows or maybe even cheesier daytime talk shows. Do you think Bobby is more like Tyra or Jerry Springer? 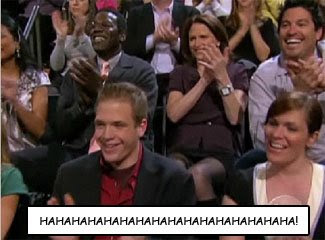 Speaking of cheesy, no matter what is said on the stage, the audience claps and laughs uproariously. And it's obvious that they're not laughing at what we are being shown. Apparently they had a comedian come in to warm up the audience and then just badly edited in the reaction shots. 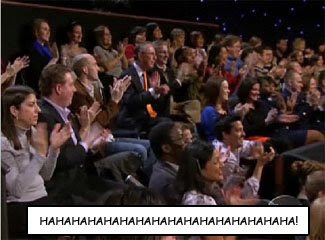 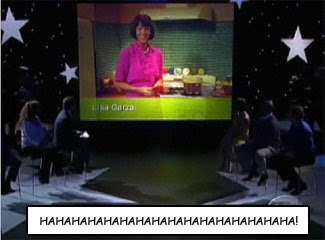 They show Lisa's clip first and with the extreme editing it obviously got, it looked pretty good. Lisa is still too good for the Food Network though. 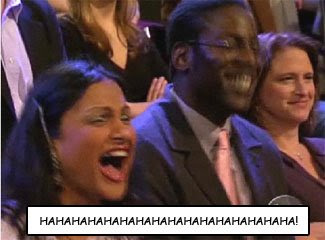 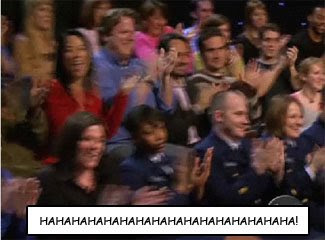 Adam was next, and his clip was actually really really good. I mean, I would watch the show. He was engaging, funny, and he came off as if he actually knew what he was doing. Quel surprise! 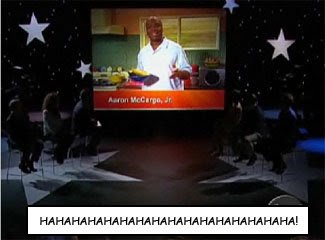 Aaron, on the other hand, was partially crippled by his awkwardness. He seemed better than in the past, but I could sense that he was still uncomfortable in front of the camera. He seemed rushed. But maybe I'm the only one who caught that? 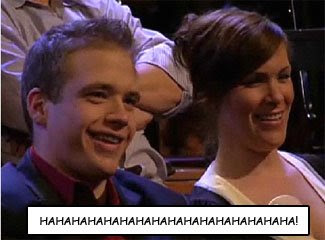 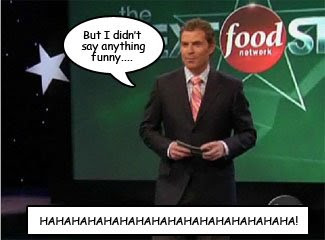 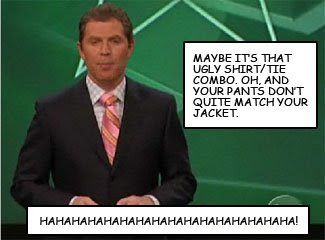 Bobby then tells the audience that the selection committee needs a few minutes to make their decision. How unlike the judges on Top Chef who sometimes needed to discuss the day's challenge into the wee wee hours of the night. But then, that show involved an actual prize. 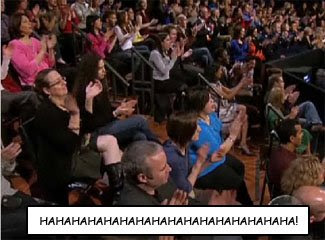 Back in the judges chambers, they discuss the finalists in a very scripted way, pretending that they hadn't made their final decision 6 weeks ago. 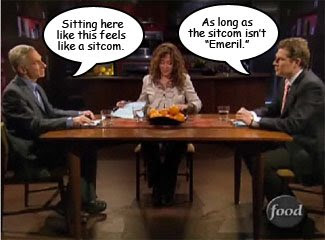 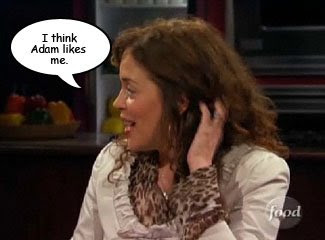 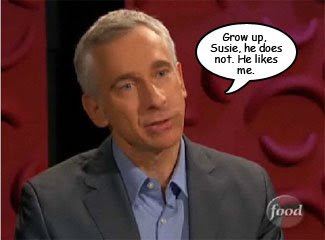 They go back onstage and Bobby makes the announcement - Aaron McCargo, Jr is the Next Food Network Star! 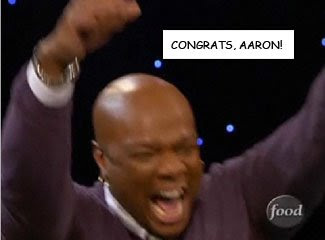 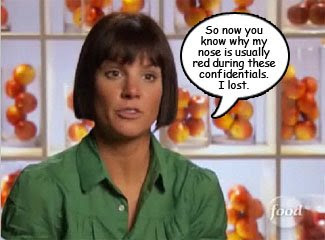 Sorry Lisa. Sorry Adam. Although I liked Aaron from the beginning, I can't say I think he's the best man for the job. But still, he's very appealing, and doesn't seem like a tool at all. Not like that Fee Eddy guy.

So Aaron "won." I predict that they will make 8 episode of "Big Daddy's Kitchen" before they switch him to something even more fabulous and suitable for his abilities*.... 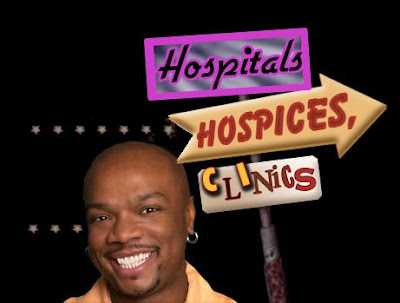 ...in which he'll travel the country, visiting cafeterias of sundry medical institutions where he will eat entire meatloaves in one bite while raving about their awesomeness with his mouth full.

*Thanks to Mr Minx for the fab idea!
Posted by theminx

Thanks for doing a great job. I mostly watched the show so I could follow along with these reviews.

They seemed like they wanted to have someone who could do a show "right now." Must have had an opening at 2:30 AM for some reason.

Aaron was awkward, lame, and uninteresting. He never seems comfortable on camera, his jokes were dumb, and he's one of those people who uses the same awkward transitions all the time, like "Cool, cool." He's the only one of the three finalists whose show I will not watch. In fact, I'd rather carve my left eye out with a grapefruit spoono than be subjected to 30 minutes of this a-hole rambling about bold flavor whilst using honey and brown sugar.

came across this and thought it added to the clusterf&*%.

tho i missed some of the first episodes, it kind of felt that aaron was determined as the chosen one waaay before the finale.

I too though Adam and Lisa did really well and I would watch both their shows, while Aaron can't even speak clearly. I knew he'd win though, when he choked hard last week and they decided not to eliminate anyone.

Also (I was anon #1), didn't they do it live last year? Wonder why they kept it on tape this time around.

Yes, they did do a live voting last year. I think they won't do that again because the people voted for Amy Finley and TVFN wanted Rory Schepisi. And everyone knows they don't care what the people want.